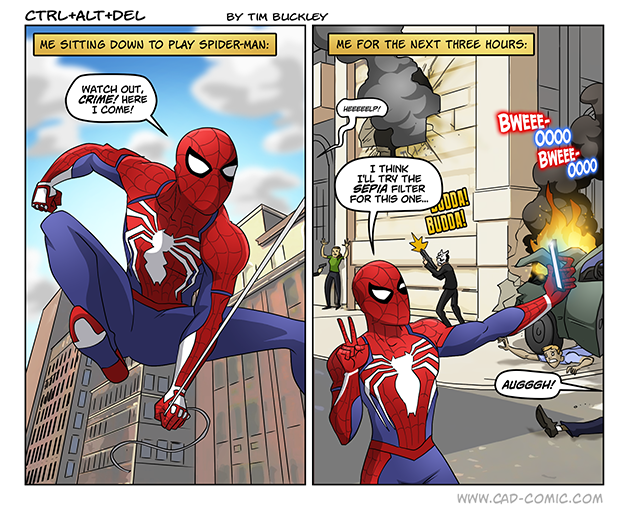 I Am A Bad Superhero

I have never really done much with the photo mode in games before. I dabbled a little bit in God of War, took some fun shots, but largely just focused on playing the game.

The opposite seems to be true with Spider-man. Partly because the game is so gorgeous I can’t help but stop and gawk at it sometimes. But also because Spider-man himself is incredibly photogenic. Insomniac did a fantastic job capturing Spidey’s fluid gymnast-quality movements, and being able to freeze-frame and rotate around makes for some stunning captures.

However, between this and catching pigeons and shit, I’m pretty sure New York’s crime rate has gone up with me around.

Well, Spidey is a tiny bit narcissistic so I guess you are just staying in character?^^

Hm. I realize I don’t know very much about Spidey…. But I think that depends on the “interpretation” of Spidey, doesn’t it? I’ve come to think that there is a huge difference character-wise between “Spider Man” and “The Amazing Spider Man”.

I mean, in every interpretation, Peter Parker makes a living basically providing selfies to the newspaper…

For little to no pay and solely to survive because it’s literally the only job that will allow him to carry on being a vigilante AND make money at the same time. Peter started out as a narcisisstic prick and tried to make money other ways before Uncle Ben was shot. After that he had a jerkass realization, as an good Spider-Fan would know.

Peter Parker must be making thousands selling all those Spidey pics to J Jonah Jameson.

Nah, he does not work for him anymore.

DId you ever give the photo mode in AC:O a try? It had some pretty nice shots as well.

crime rate goes up, yes, but the pigeons aren’t shitting on the cars anymore

Him.
Reply to  foducool

Turns out half the criminals are extremely allergic to pigeon poop

I always cringe in disgust at the white in Spideys uniform. It looks AWFUL and really has no place in the Spiderman storyline.

Fortunately the classic suit is in the game and easy to get 😛 My biggest complaint so far is the sheer lack of diversity with the costumes. Yeah, I can somewhat understand why the symbiot costume isn’t in the game from a mechanic standpoint, but Peter made a black suit that looked identical to it, and even had a synthetic symbiot suit he made to infiltrate the Avengers when Norman was running it so that doesn’t entirely hold water. Point being, while the lack of a symbiot suit or the Spider Phoenix is acceptable from a mechanic standpoint, WHY are… Read more »

Also if it is any consolation Peter himself isn’t the one responsible for the white armor, though saying who is would be spoiling lol

I know I know, but it still leaves something of an annoying…flavor to the game when you have 3 suits with the exact same ‘immune to bullets’ power you know?

They could have used the Unlimited suit with it’s cloaking device (and cool cape) for one of those slots instead just to add something unique and different.

A) The white design is awesome.
B) The best suit in the game is the Homecoming suit.

Might change your opinion on the homecoming suit, but you can take the suit power from that suit and use it with other suits. Spidey bro with iron spider looks sweet thematically

My opinion of the Homecoming suit is based on aesthetics, not because I missed the tool tip on suit skills 5 min into the game XD

I blame the lack of Bruce Cambell on that, I’ve become so accustom to him as the narrator for Spiderman games that not having him nagging and complaining about what I’m doing throws me off and makes me overlook those tool tips….*sweatdrops* thanks for the tip Timothy, I’ll try that out for sure, and switch around some of the others for fun lol

Scarlet Spider still my favorite though 😛

A fun detail about the White Spider on the game’s title suit; If you read the notes that Dr O attaches to his notes when he sends Peter the design ideas, he notes that research into the subject suggests that strongly contrasting colours cause a slight delay in perception and object recognition, to the factor of circa 14 millisecond delay, which for Spider-Man is a decent opening if he takes a bad guy by surprise.

In this storyline it was personally made for him by his [Spoilerific] mentor, so for me that’s enough for it to be justified. Plus this is kind of a unique universe.

This game makes me wish I had a PS4 🙁

Spider-man, Spider-man,
Takin’ pictures on Spider-cam. Fightin’ crime? When there’s time.
In between these Spider-rhymes.
Look out! He’s his own Spider-fan.

Him.
Reply to  The rAt

This is amazing.
I…I…
I find it incredibly funny!

Jay
Reply to  The rAt

I unlocked the Spider-Man Noir outfit during a nighttime mission.
… It’s true. It’s all true.

Where are the Avengers when you need them?