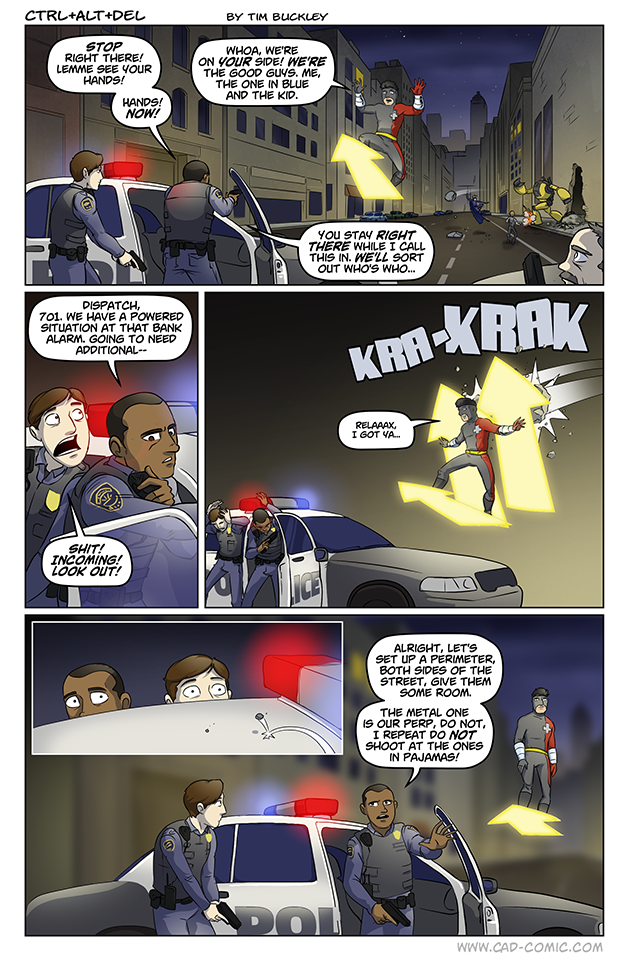 Couldn’t Demolition Duke make a lot more money selling his design to the Army than robbing a bank?

Having seen bunch of superhero/supervilain movies, you could bet that he did try to sell it to Army. Hell, he might be an ex military, dishonorably discharged for using earlier version of the suit in deployment and being framed for the death of his unit or something on that accord.

Maybe Demolition Duke tried to sell his design to the police; if so, the situation got a lot worse. He will need to be talked down as no one can fight him.

Many genius bad guys could obtain their goals without resorting to crime… Lex Luthor goes out of his way to try and destroy superman but whats the point? He’s extremely intelligent and his corporation rivals the Wayne Corp in size and power.

Because he’s a Sociopath? Lex knows he’s a genius, so he goes out of his way to lord it over everyone with tyrannical zeal, Superman included.

Yah. Wasn’t it explained in one or a few of the show or comics, that lex wants to, roughly, be looked up to.. but he keeps dragging himself through the dirt. Superman, not even a ‘human’ is so revered, that it infuriates lex, so lex must ‘drag superman down’.. just to prove that this ‘superman’ isn’t so super? HECK lex becomes president at one point.. then throws it away because ‘superman grrr’. IF he just focused on doing ‘good’ instead of ‘grr, superman evil grrr’… then he could get the fame and the, respect he wants, but is too blinded… Read more »

Lex’s story arc is the primary reason I enjoyed Smallville for what it was. It showed that a vast majority of the time Lex wasn’t trying to be evil, he was trying to do something good. He just ALSO had an obsession that his best friend (in that storyline, anyway) was always lying to him and he wanted so badly to be a part of whatever was going on with Clark. That turned to pain, then anger later on in the series as he felt continually betrayed. I personally love when they make villains a bit more understandable than just… Read more »

“Fear is the path to the dark side. Fear leads to anger. Anger leads to hate. Hate leads to suffering.”

You can’t be courageous without fear. Fear keeps you alive, and the greatest heroes always admit to having their pants scared off half the time. Quoting Star Wars as any sort of moral compass is an incredible act of self delusion. I love Star Wars but I highly recommend people do not try to use any of the principals as guidance for their lives… its twisted, contorted, and results in killing young-lings apparently.

I think luthor wants to rule the world. Not just be some rich guy. Also, he seems to have a serious hate boner for superman, that is connected to superman not being human and making humanity complacent.

See this is why in Superman TAS they made Lex a billionaire genius who was still hellah rich but would still do crimes but in secret. Wanting to destroy Superman for being a threat to his illicit affairs but still having a very successful company. He probably could have stayed a very rich man but he was always greedy for more money and power.

Up until he was finally caught by a joint effort by the Justice League (and got cancer from the kryptonite he always carried around), lost his legitimate status and had to go full time super villain.

In a few Superman storylines, Lex legitimately wants to protect Earth and make Earth better. He just believes that Superman is a big danger to society. Both in the sense that he can’t believe Superman is incorruptible (so, Superman will eventually “show his true colors”) and in the sense that he’s xenophobic (so advocates for humans to solve their own problems instead of relying on alien intervention.) Sometimes he even (convincingly) argues that Superman stifles human improvement by taking away threats that would provoke innovation.

There’s a fairly decent fan fiction where the guy just goes through DC’s list of villains and tries to turn them into peaceful industrialists.

Are you guys suggesting that a billionaire could have such a desire for power and fame and to be looked up to by the masses that he’d lie and commit crimes and do anything, even when becoming President, to further those ends?

Because that just sounds far-fetched.

Downvoted for bringing politics into a non-political forum.

What if his goal is not to get rich, but to destroy that bank?

He was holding a bag ful of money when we first saw him, so that option is out.

Money in banks is insured.

A few years ago, I read an article about a bank robbery where they dug under the walls and entered the vault from below. they got away with something like 40k, but there were at least 8 of them and they took more than 6 months planning and digging to get in … the analyst said that they’d have got more in a minimum wage job

Not advocating for this, but in their defense, pulling off a version of half the plot of “Die Hard With a Vengeance” at least sounds like it would be much more engaging “work” than slinging burgers or retail hell. 🙂 For fun, I worked out a minimum payout of $4.81/hour per person, FWIW, but that assumes a full 40 hours a week of planning per person for 6 months (26 weeks) straight, which seems dubious to me. Also, should we count their state-funded room and board in prison for 15-20 years as part of their payoff? Rent’s expensive these days,… Read more »

Absolutely. There’s a book about a consultant for this sort of villain. “How to Succeed in Evil”. Fun stuff. Guy tries to talk his clients out of stuff like: Using an army of robots worth a few hundred million to hold a damn for $1 million ransom. Also the robots don’t *plant* explosives, it was a self-destruct thing. So they’re not even re-usable. He winds up putting advertising on the equivalent of the Hulk… (he’s really a giant Banner) and having companies bid to put their competitors name on the electronic shirt display. Like coke and pepsi… and the bidding… Read more »

Girl genius much… or even 40k orks. That gun has a trigger, no bolt, a rusted barrel, and is held togeather with duct tape. “ork pray, make gun go bang’ 😀

There’s no room in this story to get into a villain’s backstory, but if there were I might tell you that he’s a mechanically talented blue-collar construction worker that’s struggling to pay his mortgage in this economy, and the bank is refusing work with him so he’s angry and looking to get back at them by stealing what he needs from the very bank that’s trying to foreclose on him 😉

But for the sake of this particular storyline, I just needed a bad guy doing a bad thing 😉

And that reminds me of the Beetle. He was blue collar but could design things. But no one took him seriously because he had no college degree(s)

The Army may have some contracts for power armor already in place and his design didn’t meet the lowest bidding process.

Reminds me of that scene in the first Avengers.

Yeah I was thinking the same thing.

I enjoy this comic a lot but that there was one of the few times I actually guffawed.

That look on his face. ‘oh.. we might have to redesign our costumes’…

Lucas has the best look. It’s the whole, “Look jerkwad, I just saved your sanctimonious butthole, You could at least call them costumes, not PJs! Or at the very least be a bit more thankful that you’re not a greasy smear on the pavement!”

The Schaef
Reply to  Padraic

Yeah that is the real problem with vigilantes fighting crime. Which one is the criminal to shoot with 7 warning shots into the back? XD

I’m glad this isn’t going the route of law-enforcement/civilians being stupidly blind to blatant behavioral and visual cues that point to who is good and who is bad. I always find that trope annoying and frustrating – especially in comics where a team of heroes have clearly color-coded themselves.

“Huh, the ones in blue and yellow are very obviously saving people from the ones who have taken active fashion measures to make themselves more visually intimidating. We should probably shoot at both indiscriminately.”

Tobias
Reply to  The rAt

From a meta-story standpoint it’s definitely done that way to easily inform the reader who’s good and who’s bad, but in a more realistic take there’s nothing stopping a villain from dressing “heroically” to confuse bystanders.

If someone had never heard of Batman before, how many people would peg him as a villain instead of a hero at first glance?

Also, it isn’t like there aren’t real political and law enforcement officials who have trouble identifying who is and isn’t the good guys or bad guys, even when the bad guys dress alike and carry convenient swastikas to identify themselves…

I’m in favor of Cape still

Yeah it *is* probably a good call to not just assume who the bad guys are, but I’m glad they can figure it out pretty quick from context 😛

Right? I actually like that. The poor cops haven’t memorized every vigilante in the city, and it would be stupid to guess based on costume. But one person trying to talk to them and clearly trying to keep damage down probably is on the nicer side.

Cop in last panel looks like Ethan lol. Twin we dont know about?

In a world of super villains and heros, you’d think the police would have some sort of registration system set up for heros. Makes you wonder of the police have some supers of their own.

registration of supers is a very very bad idea, also most likely unconstitutional since it is compelled speech, which violates the freedom of speech