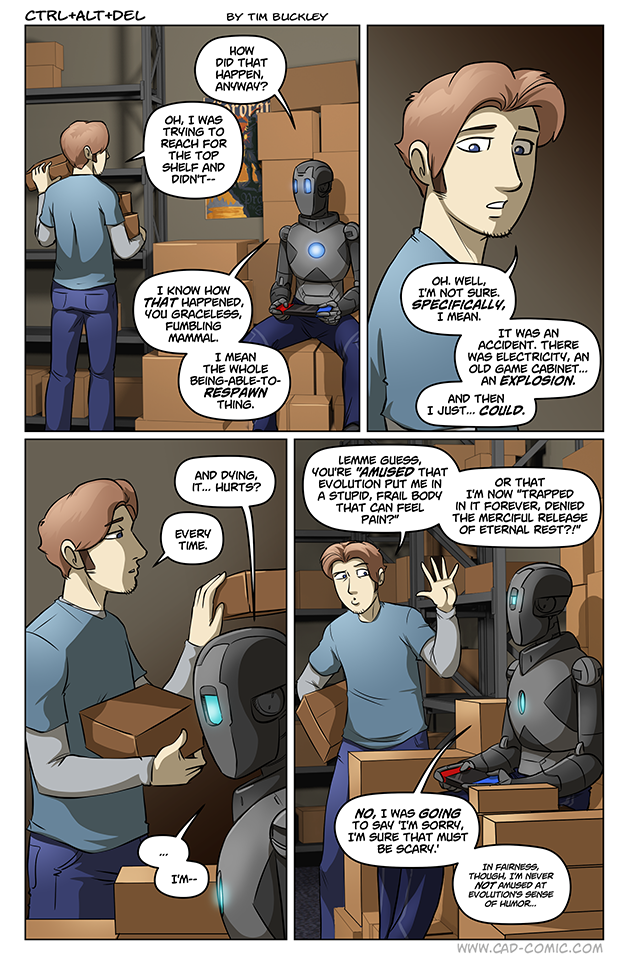 Aww, look at how our baby has grown! Empathy is already at hand.

It came up last chapter I think.

I think it’s probably more of a reflection of his current morality status Like in Infamous or Mass Effect.

I’d say turquoise, half way between blue and green…

I’m so glad Zeke corrected Ethan instead of letting the assumption lie.

JJ What?
Reply to  GUNnibal

Fucking “Graceless, Fumbling Mammal” has me in TEARS right now, HEHE!! I’m convinced SOMEWHERE in the multiverse HK-47 and Zeke are best buddies, mocking organic beings, and mutilating the ones that annoy them.

That’s a bit as Wolverine, the only thing his healing factor can’t help is the pain.

The bounding is bigger and bigger, will see what happen when our robotic friend wants to go outside

I really would love something like he just going out of the room to ask something and Scott asks “But how?”, and he replies he disabled the safeguard on day one then goes back to the backroom.

Correct me if I’m wrong. But didn’t the tech get told ‘turn the bomb off’ a while ago?

Not That Brian
Reply to  Kaelin

The going theory is that he didn’t actually do so.

He told Lucas “You don’t have to worry about the failsafe anymore.” He never said he actually would disable it.

Gonfrask
Reply to  Not That Brian

Well,now we know what the Cyan color means. Empathy.

Is there a therapist for super heroes? I think Ethan could use someone to talk with.

Zeke doesn’t need a therapist for supers; he needs a therapist for robots, and we’ve already seen that Switch is a great listener. Most likely, Ethan’s interrupting a session as we speak.

Also brings into the Q – is Ethan still aging? Will he respawn if he dies of old age? If so does he respawn as “now” Ethan or old Ethan about to die again in a horrible loop of old age death 🙁

And another horrible situ popped into my head – what if Earth somehow destroyed? (Aliens/meteor/nukes) would he spend an eternity respawning in space to suffocate/freeze over and over…

We learned that ethan’s powers revert to a “save” when he is recovered. Proven by the blood donation gag part. This also means if ethan was dismemebered and left to recover with the permanent injury, he would respawn with that injury when it fully recovered. Assuming old age, or if ethan can actually age (which is yet to be confirmed), his power would likely see that as a natural process and allow him to pass. Thats obviously a theory. A Vacuum situation would likely result in an absolute nightmare situation. Or if the worst happens, and the planet is blown… Read more »

Again, the poor Wolverine suffered that. In one alternative line, he is sent to an air-less planet to leave him die and revive eternally.

If we assume Ethan’s power follows video game logic, then he will stop respawning when he “beats the game”. Which for life usually means death, but it could mean when he reaches the end of the story.

Or in otherwords, his power ends and he stops respawning when he either reaches a “good end” – all villans and bosses defeated – or a “bad end” – a villain manages to end the world as we know it.

At least thats my little pet theory. In the end, Ethan really stops respawning when Tim says so, or stops writing CAD.

Hey, that’s a good point, Calibus. After all, any game that respawns you in a no-win situation after you die is a broken game. Ethan respawning and respawning in the vacuum of space doesn’t make sense.

Imagine the villain’s face when he realizes that he *can’t* destroy the world, any more than he can destroy the pipsqueak defending it.

I wonder i it would simply stop saving at a certain age as the body is slowly getting closer to death, so the last save is where he would revert to each time.

Reminds me of that comic book/movie “The Old Guard” – bunch of immortals, and

plot spoiler
one character is imprisoned in a chained-up iron maiden and thrown into the ocean, left to drown and resurrect repeatedly for centuries
Last edited 9 months ago by LuckyD
0
Reply

Old age is end of mission, no respawning… I hope (guess Ethan hopes too).

So there is a comic book character that is relevant to this question. Deadpool’s daughter. Her mutant power is to come back to life at the “Save Point” of her body when her X Gene activated, so a teenage girl. No matter how old she is, she reverts to a teenager on death and ages normally. So, right now the idea is that Ethan goes back to a prior “save” of a healthy body. But it could be the healthy body he had at the point of his power activating. Also, if you recall the Wintereenmas injuries he sustained, Ethan… Read more »

I must say, that even though I thought the story where Zeke showed a possibility to change, but was still very much in favor of murdering everyone was handled poorly (i.e. he suddenly didn’t want to murder them), the following storylines of him evolving have been spot on.
I would love more of this complexity for Lucas, Ethan and Scott as well.

Shut down the experiment; purge the AI! Now when the robots take over theyre going to kill us all quick and painlessly so as to not cause too much undue suffering and allow us to go into the sweet release of the void quickly.

It already said that the terminator way is inefficient and just to gas the whole planet.

Huh, so getting decapitated by Lucas wasn’t his first death?

Yeah, I noticed that inconsistancy as well. Might be something more than we know. Its possible ethan just thought he survived the explosion, and only had his powers confirmed by Lucas by his freak awakening.

Didn’t the game cabinet itself explode after the lightning strike? I thought that’s what he’s referring to, instead of a separate occasion 🤔

He doesn’t really say that he died in the explosion though?

We have seen the explosion and what happened afterwards (Analog-and D-Pad-04-07 and 04-08). I have linked 04-07 in my answer to darkening as well.
It was the same explosion that hit Lucas as well.

4.09 has always bothered me: https://cad-comic.com/comic/analog-and-d-pad-04-09/
This comic pops in right in the middle of the flashback sequence revealing their origin story. I’ve been reading CAD since 2003 (and have even read the full 1.0 boxed set), so I’ve read everything in order, but when I clicked on the link to 4.07 I’d forgotten that this was a flashback till I went back MUCH further, but 4.09 still just feels really out of place. Am I missing something?

FWIW, the remastered editions in the book have captions to denote the transitions between flashback and present to make it clearer. 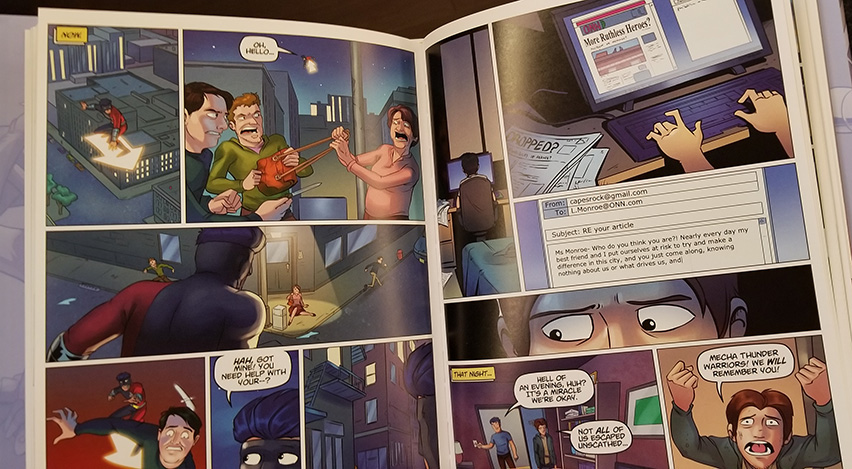 ZK is clearly emotional enough. I’ve been saying it since day one. I’m guessing it’s an inherent side effect of having a humanoid intellect and self-awareness. I doubt their creator meant to give them feelings. So, they don’t just avoid destruction out of logic.They also fear death. And, as someone who’s been threatened with it since the very first instant, and for a sustained period of time… They fear it a great deal. Physical pain is not part of this, but PSYCHOLOGICAL pain is. Fear and pain can make you choose to close up to others, or to open up… Read more »

I like the homage to the original X-men movie line, “Every time.”

Now his eyes are cyan

I need to go back and check, but do the characters notice the colour changes, or is this for the readers benefit?

We are being educated to read ZK’s facial expressions, but do Ethan et al. notice them too?

They do notice, and I think the first time it happened it was pointed out by Ethan.
https://cad-comic.com/comic/mindstate-p9/

Cool, I missed / forget about it. Thanks for the link.
Appreciated.

The look on Ethans face in panel 3. Damn. Has he talked about the (really horrifying) downsides of his power with anyone but Zeke?

I think he did, because I remember Scott saying that he doesn’t know what psychological effects constantly dying are having on Ethan. But I don’t think he’s had a real sit-down conversation about it yet, which looks to be what this arc is about.

I feel like he explained it to Lucas once, and that’s how we know. Or maybe that was Scott?

He told Lucas about it at one point. Lucas made a comment about not being able to die being a great power and Ethan corrected him that his power is that he doesn’t *stay* dead, and still has to experience it all.

Sometimes I wish CAD was like Netflix so I can just binge all the pages at once. Been coming to this website for as long as it existed and can’t get enough

If you forget enough, you can do it.

Lucky ability, but sucks that it hurts all the time.

the bot can kinda understand. to him its like being unpowered improperly and turned on over and over

Please tell me you heard Hugh Jackman’s voice, or at least Ethan adopting his tone, for the “every time” line. And wow…suprising moment for Zeke!

So if Ethan reached peak human, would he sorta stay there, his power thinking this is Ethan at 100 str, 100 sta, 100 dex, fully leveled? When Franklin Richards reached his peak in one comic, he and Galactus watched as the last star went out at the end of the universe and he thanked Galactus for not devouring the Earth.

If anyone is looking for the 2/23/2022 comic, the redirect isn’t functioning yet but the URL is: