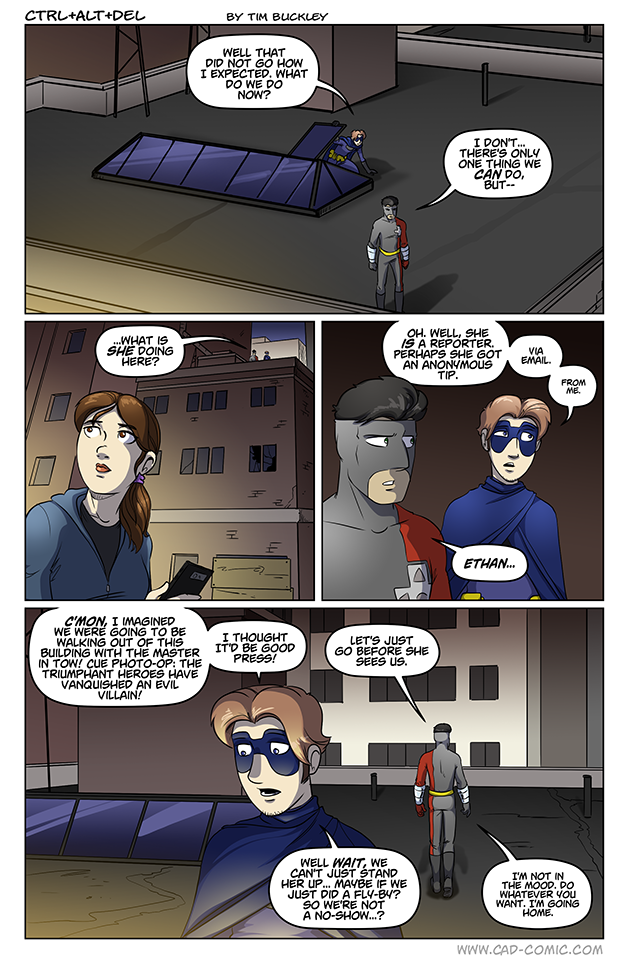 Wonder if the master told her who they are. Or maybe she figured it out on her own already.

Unlikely on both counts. The master just made his whole ‘leave me alone or I expose you’ ultimatum, which would make no sense if he’d already told a reporter about them. (Also he doesn’t know or care about a random journalist like Liliah, and I assume he’d have better options for exposing identities). Lilah figuring it out herself also seems dubious at this point. Lilah never met Ethan (I think? correct me if wrong), so it’s not like she has anyone to link Analog to. And it’s not like he’s a famous or recognizable figure to easily look up if… Read more »

In the third panel, Ethan states he was the one who informed her.

Hey, cut him some slack! He is apparently at his wits end for now, so such slip-ups may happen. He’ll regret it soon enough anyway. Perhaps he even already realizes halfway home what he just said to whom. 😉

I’m wondering what the situation would be like if it was reversed; Lucas finds a cute hunky reporter he wants to impress, so starts leaving him ‘anonymous’ tip-offs and such. Would Ethan be supportive? Freak out about secret identities? Try to, uh, “help”?

I mostly feel he’d act the same. Ethan doesn’t seem to ‘get’ the greater implications of losing their anonymity, and occasionally suggests things that put them in danger – wanting to sell that robot head on eBay, for example. It’s clear that the danger of the situation just sits more heavily on Lucas’ shoulders… possibly because he’s only got one life.

Who wants to take bets that Ethan is going to neuter the Master’s threat by going public? It really wouldn’t be that difficult, all he’d need to do is explain the situation to his lady reporter friend.

Without Luca’s permission? Luca’s last line there was a big oof and a warning sign. Ethan should probably just go home. Anything he does with the reporter that night is going to end badly where Lucas is concerned.

What if a completely unrelated duo goes public as A&D?

So… The main villain suffered fate worst than death – he got dumber down so much, that even Balrog now looks up to him. “Before: attacking public events, blowing up cargo ships (attempting to) and ordering killbot army to, well, kill.” “After: Doesn’t know how to set up video conference, Is this thing on, cliché cheetos dust, and stop being mean to me or I’ll tell mommy.” Of course, for writer it’s no easy task – if you create a enemy that can really test your heroes, then how do you stop him later on? And that’s where character growth… Read more »

He attacked public events and cargo ships to destroy the technology there. Analog and D-Pad interfered, to the point where he conceded he had to try and remove them. Lucas is the only human he’s ordered killed, and even that was not his first choice, because he’s stated time and time again that (in his mind) he’s trying to save humanity, not hurt them. Page 2 had nothing to do with him “not knowing how to set up a video conference,” he turned it on and Analog and D-Pad weren’t in the frame. His “Hel–” was beginning his evil “Hello,… Read more »

Dumdidium – thing is, you’re encountering what happens when you go from anonymity to knowing the person. When he was “The Master,” we could see him only by his actions and the way he chose to present himself. The more you expose of yourself, the more faults people tend to see. The ‘real’ us never measures up to the persona we try to present. I’d argue that sure, it makes him slightly less menacing, but far more human. And I’d argue that a human who honestly believes he’s doing good is far, FAR more intimidating than a Rita Repulsa-style baddie… Read more »

The basic robots have some autonomy and baseline AI, but it’s all routed back and through Eugene’s command consoles. So basically, they can ambulate and function on some core parameters, but they have no real decision making abilities of their own; they’re following some directives, modified on the fly via Eugene if necessary. The need to interface and send commands and information back and forth created a small amount of lag, which spurred Eugene to create a robot that could assess and decide on its own in the moment. The robot on 1.10 is attempting to cleave the iPad in… Read more »

My guess based on what we’ve seen of Eugene: There is a clear difference between ‘willing to kill if they refuse to get out of the way’ and ‘actively ordering to be killed’. Eugene doesn’t want to kill and will avoid it if he can, but if someone truly is determined enough to throw their lives away in order to protect the evil technology, he’s not going to hold back just because of that. His mission is too important for that. Eugene never ordered humans to be killed (before Lucas). His only target was the technology, not the humans. It’s… Read more »

Thanks for perspective – some good points there (well, no surprise, you know best what is going on), made me change my mind a bit that it’s not so bad. 🙂 So let’s just see how it evolves from here.

On this page it looks more like the way Tim draws his wife than how he draws Lilah to me. They’ve always been similar, but still distinct. This doesn’t read as Lilah to me, but maybe that’s just me.

Why do I see Ethan falling off the building, dying, and respawning right in front of her, then just going, “Ta-daaaaa.” LOL

Better yet, next page being a full-spread of Ethan diving into the Skylight that he was told not to do earlier.

Page after is him respawning on the street next to Liliah, muttering to himself “Ok, jumping through glass skylights can result in death”, Lucas face palming at what Ethan just did and Liliah looking shocked/questioning what is going on.

Funnily I can relate to our heroes here, some hacker broke into a database containing therapy records and has published 300/40000 records or so. Blackmailing the company failed so everyone else on that list has received ransom demands via email.

I don’t have anything “too bad” in there but Lucas’ reaction sure feels familiar.

Some therapists put their logs into a database and connected that to the internet.

From the previous page:
Ethan: You get to smash (something) but I don’t?
… then into frame walks Lilah…

Saying “Do whatever you want” to Ethan should elevate Lucas to Super Villain status.