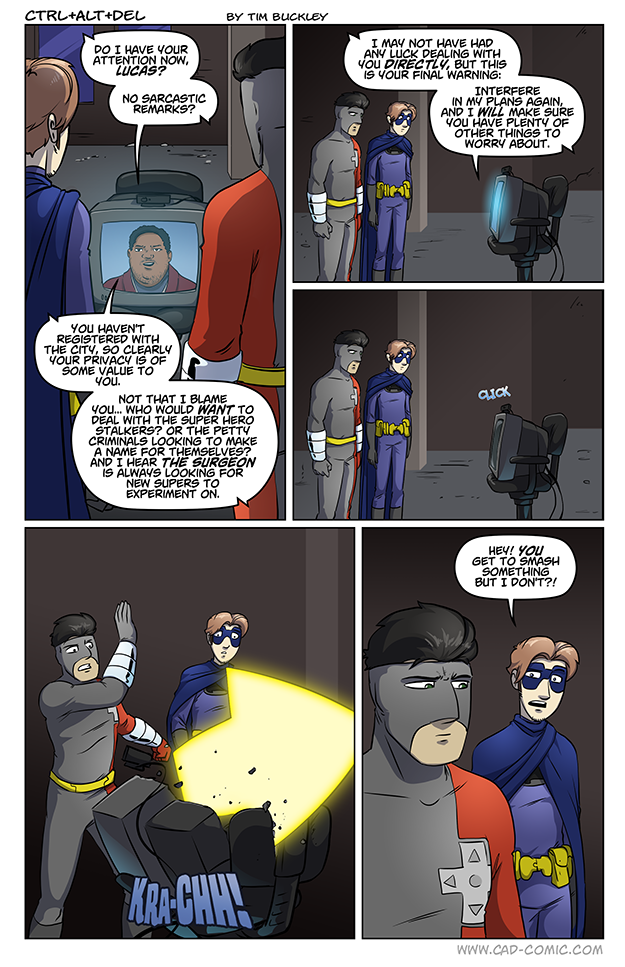 I know this isn’t where the comic is going to go, but this is the point where in their situation, I would call in help from other supers.

or a certain reporter lady 😉

Anon A Mouse
Reply to  Me-me

I can think of a few reasons they wouldn’t. Like Eugene mentioned, they are unregistered so registered supers are probably less likely to want to get involved in their “indie drama” to use a term. It’s entirely possible they could find a sympathetic registered or independent hero like them but there is likely an unspoken reason that doesn’t happen more often already.

Not to mention that Gene’s already demonstrated twice that he’s the type of guy to try to prevent catastrophe by blackmail. The first time, he used a failsafe; I’d imagine that he’d do the same here: set things up so that IF he was suddenly and without warning incapacitated, word would get out.

Zeke to the rescue!

Tv wasnt a bomb? Suprising if he would hold off on this, guess he hopes it will make them abandon their persuit. Could work.

This villain does not appear to have a particular interest in harming people without a solid reason. Remember, he has previously explained that he’s actually a tech-hater. IMO it seems perfectly in line with his character to forgo extreme violence against someone when blackmail is a viable (easier and less counter to his motives) option.

Okay, so now it’s personal.
Only the villain is the one holding all the cards.

Lucas must not be much of a retro gamer to destroy a perfectly good CRT.

I don’t get it. They know Eugene’s identity as well, but they didn’t play that card too??

They could, but to what REAL end? He’s taken measures to be off-the-grid, so to speak, so it’s not like his name being out there is going to necessarily cause him a lot of direct trouble. And if there’s a question of whether broadcasting Ethan and Lucas’s identities into the internet void is going to cause any sort of ripple at all, I would expect it would be even LESS so for Eugene; after all, simply calling someone a “super villain” online wouldn’t spur anyone in any real position of power to act without verifiable proof, lest “super-hero swatting” become… Read more »

I would assume because they aren’t registered they are considered villains as well at least in the technical eyes of the law. Yeah its the sort of villainy that the police aren’t going to care about, unless say you drop someone off a roof. Then its manslaughter. If they were not in that situation they could just call in a police report about Eugene breaking into Lucas’ house to kill him and show the lesser robots as proof. That doesn’t make for much of a story though so I appreciate why you are going this way.

Its sort of like a Batman scenario I think, like yeah they’re heros but being unregistered makes them more like vigilantes which is illegal. Clearly they just need to get their very own Jim Gordon and/or a couple billion bucks.

The Surgeon sounds interesting, can’t wait to see that guy appear in the story trying to cut Ethan apart to get behind his respawn secret.

Ethan already proved with his blood drive scheme that he can go through a significant amount of physical duress before his respawn kicks in. I’d be more worried about The Surgeon not being concerned with the “secret” and just wanting to “experiment”.

So did he publish their identities (and see their faces, as per the previous strip), or was it just a threat?

They *just* got done with the conversation where he made the threat! They didn’t stand there, waiting, for the past few days that *we* waited for a new page. O_o. He just got sidetracked with his “got your attention now” bit, and likely forgot.

No, he gains nothing reliable by actually releasing their identities (maybe it does actually make their life difficult, preoccupy them, but it certainly doesn’t stop them from pursuing him). His gambit is that the threat of losing their anonymity will be enough to get them to back off.

Hey, its unusual for you to directly explain something like that XD

The Master of the Red Ring could end Lucas and Ethan as a threat whenever he wants to by exposing them. At the very least they’d be tangled up in all the stuff he just mentioned *and* probably legal actions brought on them due to being unregistered super heroes.

I can’t help but feel there’s a reason that The Master isn’t just doing that, and I don’t think it’s just for comic-style villainy.

Honestly, the fact that Lucas called him “Eugene” might’ve been what saved their bacon here. Until then, he thought he had them at an advantage, and the original idea of “I want to see your reaction as I reveal your names” made sense.

Well, he has explained his motives before, and hurting/killing people and heroes doesn’t really appear to be a part of his agenda.

Given that Lucas is gay in this continuity, I’d imagine he has some serious issues with people who want to ‘out’ others in any way, shape, or form.

Come on, Lucas, don’t be wrecking people’s stuff. Now he’s going to need to time-travel back to 1998 to get another TV.

WAIT A SECOND.
ARE YOU KIDDING RIGHT NOW?
IS THIS FOR REAL?
Jeeze, I thought this was all WAY behind us but, NOPE. APPARENTLY NOT!

I thought CRTs were extinct.

Something tells me The Surgeon would just love to get his hands on Ethan. All the experimentation they could want with no need for more test subjects.

Except if he dies he respawns elsewhere. Gotta have a big cage.

dude, that’s some heavy stuff. He gets to choose A) giving up his identity and normal life, which is what he’s protecting for himself and everyone else. B) Giving up the superstuff, and thusly becoming an impotent who can’t help people anymore c) letting Zeek go murderbot on the other guy which is against his principals D) getting the only other super he knows involved, which is a kid E) asking Scott to go total cyber demon, again principals F) registering and asking to keep his privacy, IE becoming a pet.

Ok, I’ll ask. Where did Eugene even FIND a CRT display? I don’t even think thrift stores have them, anymore. I work in a computer shop, word is Goodwill won’t even take them unless they’re being paired with a PC to bundle for sale.

Dont you still have your old TV set(s) from 1995? I mean how else do you watch your Saved by the Bell VHS tapes?

*eyes the half dozen that have been hoarded away in spare rooms (from being too lazy to take them somewhere, and their size)*

“The Surgeon.” That, dear children, is what we call “foreshadowing.”