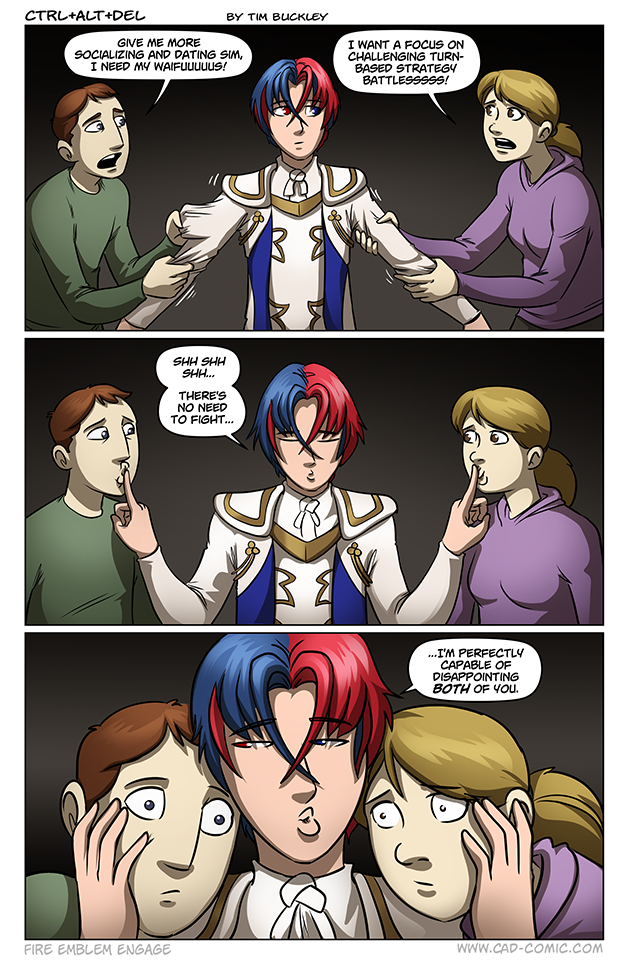 Previews have started dropping with early impressions of Fire Emblem Engage, and I’ve been trying to parse the sort of game we’re in for, but none of them can seem to agree where Engage falls on the FE spectrum.

I only got into Fire Emblem with Awakening, so admittedly I have a limited spread of experience with the series. I played a lot of Awakening, went back and dabbled a bit with Radiant Dawn, played some of Fates (lost interest, though I don’t recall why), and then played a lot of Three Houses. But even within that small window of titles, I saw the balance of the games shift from mostly tactics-based, to super focused on the social/relationship side with Three Houses.

I know some fans discovered FE with Three Houses, and want more of that style of game, where other fans want the game to focus more on being a challenging strategy title. I’m not sure I have a preference, but I am curious what Engage is like, and based on the previews it looks like… neither?

It sounds like the relationship stuff is scaled back to some degree. The footage I’ve been able to find shows, at most, some quick conversations with companions, less concerned with getting intimate than with upping some stats for battle. There’s no evidence we’ll be sitting down with our compatriots in Engage, trying to figure out what brand of tea they like and what sort of gossip will please them the most.

At the same time, there does still appear to be a ton of busy work in-between battles in the different form of doing sit-ups and petting your adopted dogs or whatever. So it’s not all-battles, all-the-time, either.

A couple of the early impressions have also mentioned that the primary new mechanic, by which your can summon past Fire Emblem champions through obtained rings, actually makes the game too easy due to the powerful nature of their abilities. Difficulty is certainly a subjective point, though, and I don’t think any of these previews encompass content past the first ten hours. Maybe things get harder.

Overall, it sounds like Fire Emblem is still trying to find out where it’s most comfortable in terms of balancing its various features. Likely it will continue to tinker with this formula for every new release until one pushes something too far for comfort. Regardless of where it lands, pleasing older fans, or newer fans, or somewhere in the middle, Engage looks like it’s shaping up to be a pretty robust game that I can’t wait to play (even if I still think the main character’s hair is incredibly stupid).

Of particular note, I’m really excited that (finally) when you go into battle with a character, it actually takes place in the actual spot that character was standing, as opposed to just a generic space in the same tileset (FE fans will know what I mean). It’s such a benign detail in the grand scheme of things, but it has really stood out to me in gameplay video and makes a huge difference in flow and immersion.

Please give us context. You made me spit my metaphorical coffee in laughter.

I believe it’s a comment on the hair. Toothpaste has those dual color stripes.

Especially when you add in that his outfit is (mostly) white, now I cannot un-see it!

It’s a fan-made name given to the main character, alluding to his hairstyle and outfit. I believe I got the san and chan suffixes mixed up. There’s also a female variant if you google toothpaste-san or toothpaste-chan.

As the old adage goes… why not both? I tend to find the best games are the ones with lots of variety. Games that do one thing, and do it well, usually get boring fast. Games that do lots of things but only does them adequately, are usually the ones that hold people’s attention the longest (and as such, are almost always the games that people are still talking about, twenty years later). So yeah, give me my challenging tactical gameplay, but also give me more dating sim options for when I’m stuck, bored, or finished the game. It’s better… Read more »

There are Alot of argument’s again’st Games doing 1 thing getting boring fast. Otherwise Card games would have died out year’s ago.

As the for the other reason, it’s simple. Three Houses Did do Both. and it took a Looooooooong time to make.

I know it can be easy to forget, but game development takes Alot of Time and Resource. Which is why I always thend to cut games alot of slack if they falter on 1 or 2 mechanics. (i’m doing another skyrim playthrough, and that says it all)

I completely disagree, I would way rather have a game do one thing well then a bunch of things okay. Most all of those wide variety decent games have faded into a blurry much in my head while those that focus on one good mechanic actually stand out.

People there for the Story – “I see no problems with this”

You lost interest in Fates because it’s boring with some of the absolute WORST writing in all of video games. Probably

Eric the White
Reply to  MarthKoopa

Jacob
Reply to  Eric the White

FC5: Three endings and your choices don’t matter. Played once, never felt the need to replay.

*Mass Effect 3 has left the chat.*

ME3 is very replayable. It’s great until the ending.

Kaitensatsuma
Reply to  Eric the White

Depends on which Fates. Birthright has a story that won’t kill you with bland map design and objectives. Conquest has the dumbest plot twists imaginable but the map design is incredible with diverse objectives and enemy placement designed to ruin your day. Revelations I haven’t played, but I hear it combines Birthright’s gameplay with Fate’s writing.

Conquest is overrated. The map design is completely average and people only think it’s great because it stands next to two awful campaigns.

I’m seeing Engage pitched as “Fire Emblem for people who didn’t want any of that pseudo-Persona dating sim mumbo jumbo.” I don’t like that. You know why Persona went big? Why Three Houses went big? The demographic who wants pure strategy without much in the way of character is not very big, people. You can skip almost all the social stuff in Three Houses. I played on Hard and completely ignored all the social bonuses on the field, because everything else about the character entirely trumped that mechanic. That said, embrace the fluffy story stuff. It pulls more people into… Read more »

I thought Persona/SMT went big because it scratched that exact itch of being hellishly difficult to run perfectly – because you absolutely needed to work those social connections for your best fusions – and being very, very japanesque.

There’s some story in there too that occasionally is, well, OKAY when it isn’t entirely predictable.

Good Soundtrack too, I’ve got the Velvet Room Compilation somewhere in my playlists.

I think the difference is that Persona seamlessly blended the slice of life stuff with gameplay.

Three Houses, honestly, felt like a slog. Especially when you’re doing second or third runs to do another route. The meals and tea times feel the same, and ‘skipping’ the monastery doesn’t feel right either since your brain is telling you it’s mechanically useful. Whereas the Persona series makes it feel like almost everything you do has a purpose. Don’t want to hang out with your friend? Go read a book and it’ll increase your stats.

Based on your comic I picked up Midnight Suns and I am very impressed how well that game splits the difference between the friend-building and the ass kicking.

Radiant Dawn was my first game, and I’m not sure it was the right place to start. I just remember your starting rogue guy was soooooo OP, it just made it feel like Fire Emblem: Sothe and the Dead Weight. Then, right as you started to get the other characters to matter, BAM, switch perspectives to a completely different army.

I want to get this game, and I want it to reward me for committing to the main characters and not try to force me to rely on one or two big hitters and babysit the rest.

Well I’d say Path of Radiance was a better starting game simply because RD is a direct sequel. The army switching doesn’t feel as jarring when you already care about the other groups. It starts you out with a new cast of characters, then shows you what Elincia’s up to, and then you get to play with Ike again. Also I do like PoR better; it has support conversations, and RD’s act 4 drags on a bit. The initial strong character is in most games though, it’s an archetype is called the Jagen, named after a character from FE1. It’s… Read more »

As far as the waifu’s and such.. eeh.. and as good as many of the RPG’s have been over the years, none have been successful to get the same level as FFVII. SO many weak copies…. They keep trying to make them pretty and ignore good story. Or throw in non-rgp elements that trash the concept of the true RPG. Mostly calling it “..with rpg aspects” or “an rgp like game” or make a RPG game that’s 2% story, 1% challenge, 22% graphics, and 75% side-quest/grinding.

I don’t see a comic. All I see is crossed bangs.

Wait hold on, what do you mean by Disappointing? There is no way this game could be super easy like 3 Houses.

I have only played like 3 or 4 Fire emblem games. Despite the fact that Houses was quite easy I beat it 3 times, never did the 4th route cause burn out. Awakening was good and I don’t remember the other 2 FE games.

Octopath Traveler II, you planning on playing it Tim?

No, I hate Japanese-style RPGs like that. Tried the demo for the first Octopath Traveler, didn’t like it, doubt I’d try the second.

So here’s my take: Don’t let people’s impressions of the game shape your thoughts going in. I basically watch the first 1-3 minutes of the video to see what they’re about to talk about and if I don’t want that aspect spoiled, I just jet. Why? Because I learned a long time ago with FE reviews in particular that everyone has things that they like and things that they hate. I happen to love every aspect of FE, yes, even Revelations (cross-nation supports namely), I have gripes with Radiant Dawn in specific, but it has to do with the group… Read more »

I actually got into fire emblem with the game cube title (whatever the name was) and also thought that fates was kinda forgettable. I started it 3 times but somehow never finished it’s just bland kinda. I actually liked awakening the most of those that I had played as it was pretty close to the first game I played while also having your own character to customize. Though I don’t share your (Tim’s) opinion on Frederick honestly since he is a lame character and you really don’t need him. I haven’t played the 3 houses yet as I just recently… Read more »