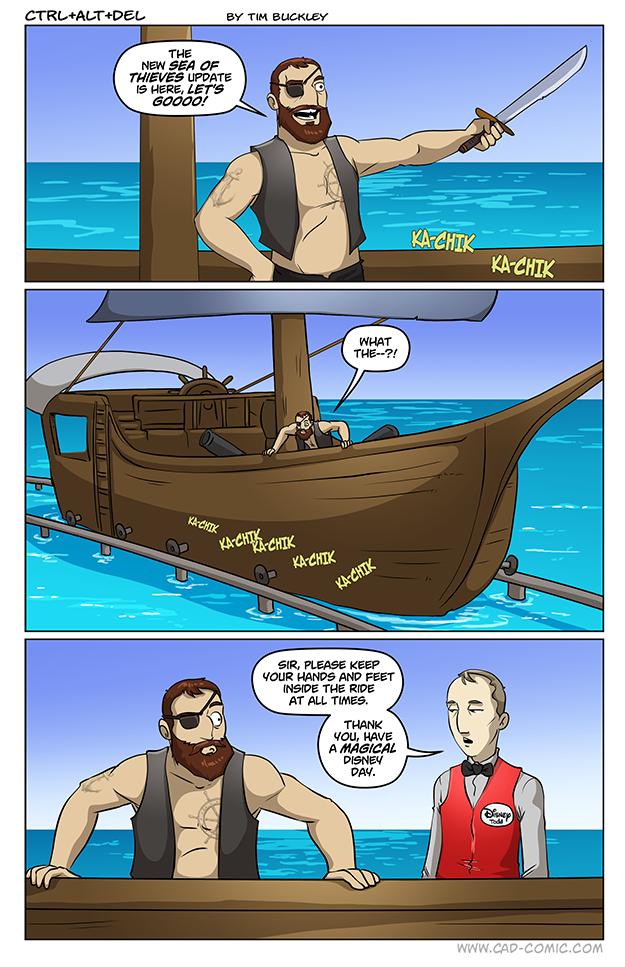 I really enjoy Sea of Thieves, so I always love seeing new content come to the game. The Tall Tales are a great PvE option to break things up in the game, so I’m excited they’re bringing more of them to the game.

As much as it makes sense, I never expected a Pirates of the Caribbean crossover, though. I have mixed feelings about it. On the one hand, I really enjoyed the first Pirates movies, and so it’s fun to see that brought to a game that clearly drew so much inspiration from them in the first place.

On the other hand, Sea of Thieves has its own world and lore, and so it’s odd to see the film’s characters and lore sort of mashed into that. I believe the Pirate’s Life Tall Tales will be instanced, meaning you take a portal to a separate area to do them, so in that way they’re segregated from the primary Sea where the rest of the content is.

At the same time, Disney tends to be pretty strict about the use of its properties, so I’m curious to see how their involvement meshes with the game’s existing mechanics and tone, or if it feels like a tacked-on, sanitized and hand-holdy theme park attraction.

I’m glad I read the comments, because I thought this meant the update changed the game from open world to one on rails. I haven’t played it… but I remain interested.

Me too! I thought Tim was comparing a new railroaded experience to a Disney ride. I thought it was a pretty illustrative concept.

Minnie drank it all…

That looks like a real cozy one man pirateship. Sort of like an upgraded rowingboat. I love it!

It’s a Sloop. He drew it really close to what it looks like in game.

I understand the concern but I don’t think it would be all that bad of a thing to have a little “on rails” adventure in SoT. If anything, I think it would be interesting to see it as a concept. The game already has a problem with being too open ended, going the other extreme would at least give an interesting perspective. Finding a good middle ground might revolutionize the game.

Me too. I’ve tried getting into this a few times, but I spend hours sailing around looking for a ship to fight and never really find one and there’s only so many times you can run around an island one shoting skeletons before it gets old.

Unagiman
Reply to  Anon A Mouse

I remember a time in my life when I sought out big, expansive games. I dumped a lot of hours in my early teens into Daggerfall without even delving too much into the main plotline. These days the idea of playing a linear game is a lot more appealing. I bought the Witcher 3 and played some of it on a flight a while back and just haven’t had the time to pick it up since. Not that I don’t play games at all, but when I’ve got maybe 30 minutes to commit to a session I don’t want to… Read more »

The Jester
Reply to  Unagiman

Exactly.. and that’s why I found myself reverting to race/sport games… a quick few laps or one game of a season only takes about 15 minutes… That’s the same amount of time it takes to select the right gear and upgrade it for a quest..

I am REALLY excited for the new update. I was a bit concerned at first with it being a PotC based one, but since it doesn’t seem to be abandoning the story that SoT has been building up for the past few years, I am down.
If rumors are true we will be finding the remains of the Silver Blade! SO EXCITED!

I know I’m alone here, but I’d be a little pissed.

I tolerate Disney as a media creator. They’ve made some stuff I love. But I’m by no means a Disney fan, and actively hate the business/corporate side. And to have that slapped onto something that I actually love, kinda ruins it. Especially if it’s done in a haphazard way that conflicts with the story and lore.

Then it just feels like I’m playing an ad. Like Geralt drinking a Pepsi or Mario driving a Lexus. Get it out.

It’s probably an age/generational thing but I imagine for a lot of people the pirate archetype comes from the Disney movies. Obviously they didn’t invent the tropes and styles they popularized, but it was the first time in a long while that anyone had made a pirate movie. I imagine that a degree of the success of this game could be attributed to the Pirates of the Caribbean films and at least the game is still about piracy. It’d make a lot less sense if they shoehorned characters from Marvel or Star Wars

was it a mercedes that was in mario kart 8?

lol yes that was

Sea of Thieves looks like a lot of fun but I’m afraid that when it comes to pirate games I’ve committed myself to a monogamous relationship with Guybrush Threepwood, Mighty Pirate™!

I realise I’m limiting myself but that’s just how it be.

Especially with how cinematic the trailer was. I mean, I’m not exactly familiar with how the other addons were advertised, but it just seems odd to have it showed off that way if the actual experience isn’t going to be heavily cinematic focused.

So, the promo comes to an end, right? and then schwang! down comes the skull & crossbones, right? And I m just sitting there, waiting; but fade to black without a single “Dead men tell no tales!” to be heard. So disappointed.

The funny thing is a Disney employee would be fired without remorse for delivering a line like that XD One of the greatest sins for Disney number to commit is to behave in a manner that isn’t one of joy at all times.

Having played the update for a couple of hours yesterday (finished the first tall tale) I just have one question: could you kindly predict the next winning lottery numbers? Given the accuracy of the comic, could it be for the next 30 ones? Pretty please…