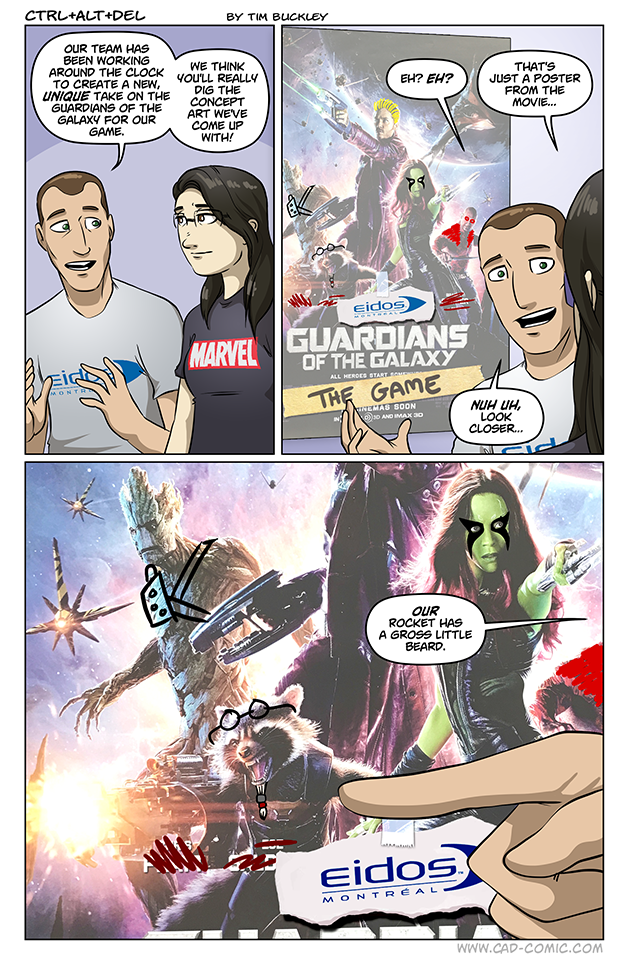 Oof, I truly do not envy the devs tasked with making these games.

On the one hand, Disney is likely not going to let them make an actual MCU game because the MCU continuity is so tightly orchestrated, and any story set in that universe would immediately be thought of as a canon part of the whole. Agents of Shield and the Netflix shows being relegated to “maybe part of the multiverse somewhere” is a pretty clear sign Kevin Feige isn’t allowing anything he doesn’t have a direct hand in.

Yet at the same time, it’s clear that the MCU portrayals of these characters have now become so engrained in our popular culture, the devs (I guess) feel like they have to hew pretty close to the mold in order to connect to that existing audience.

I think it puts them in this really awkward middle situation where they’re trying to do both, and convincing people of neither. It’s exacerbated by the corporate lingo they keep tossing around where they claim they’re “doing their own spin on these character,” which only draws more attention to how much they’re not.

The Avengers game suffered from this to a degree, the doppleganger syndrome I’ve discussed before, but the footage of Guardians looks way more flagrant to me, in that the personalities of the team look lifted straight from James Gunn’s pen.

Don’t get me wrong here, the Guardians game looks really cool and I’m excited to play it. But I almost wonder if this “Marvel game universe” SquareEnix is crafting wouldn’t have been better served by simply leaning into an entirely different direction, to avoid the comparisons. Perhaps something with more stylized art, a la Ultimate Alliance, or super faithful to the comics, or maybe even just super dark and gritty just for shits and giggles.

First, I agree about the beard. It’s strange and I don’t think I like it. Second, I think it’s this way for any other incarnation of something like this that’s had a number of movie adaptations. I watched the animated series and the characters resemble what I believe them to be, but they don’t look exactly the same as in the movies and they certainly don’t sound the same. The thing is that many of us were exposed to the Guardians via the MCU, so that’s like a baseline image of what they look like, how they act, and what… Read more »

In Spain they have used the same voice actors for the video game, so the shock is “bigger”. Is true that at first look, you think “they don’t look like the movies” but then you remember all their incarnation and styles and say “well, one more universe”.

Its the same bugbear that has caused problems for every adaption game since ET for the Atari. There’s no way to completely emulate the movie/book/series the game is developed from without making it overly predictable and is virtually impossible anyway, but if you drift too far from the established plot and character development, the screams of this isn’t “whatever” as i recognise it take over. And then there’s the absolute fails or no real attempts that seem to be named after the franchises just to garner sales, not respect. Marketing in the current environment means there is no escape from… Read more »

Are they complaining that the characters will look like a cross between the movie and comic versions? >_>

I feel like some game producer really needs to step up and just get permission to do what they want with their games. We are talking big bucks here, if someone’s sole job was to get full permission to fully do a MCU game with everything, they will earn their paycheck if they do that and nothing else. Even if they are getting paid six figures. So get it done.

Licensed games are where they put the new coding and artist recruits to gain experience. Do not look deeper than that. So these games raise as little waves as possible as the objective isnt trophies, good reviews or profit. It’s the expertise. Its college football.

Private IP games is where they put their A team, the NFL, where a studio puts their effort.

The thing I don’t understand is someone at Square Enix really sucks at negotiating rights to intellectual property. The same people that sold them the rights to Marvel characters is the same company that owns the MCU rights.

Even if there is some actors rights of refusal, not having the main characters of the game look like the most popular version creates a sort of uncanny valley. They still could get close with screen accurate costumes without the facial structure… but instead they go with a comic book look that most consumers haven’t seen.

Yeah all the characters in these two games just end up looking like movie stunt doubles. It’s not a good look from any perspective.

They should just suck it up and get the rights to the actors’ likenesses and throw a big “PROBABLY NOT CANON” disclaimer on it to please everybody. Because every time I see one of these “”””Marvel”””” games that look like it’s starring the characters’ stunt doubles, or the dollar store versions, I roll my eyes so hard I have to spend the next six hours groping around blindly on the floor for them. Is Marvel afraid that non-canon MCU videogames are going to dilute the brand? You know what fkn dilutes the brand? GAMES FULL OF DOLLAR STORE ACTION FIGURE… Read more »

That’s a great way to blow the budget on something that’s not really important to the game.

I mean, would you rather play an unpolished dump of a 6/10 that has Chris Pratt in it, or would you rather play a solid and enjoyable 8.5/10 Marvel game? I mean, Square’s gotta be paid, Disney’s gotta be paid, now you want the actors to be paid… when 95% of your budget goes to “Make it look like this licensed property,” only like 5% goes to “Make it fun to play.”

This is how we get loot boxes, people.

I’d rather they either got the likeness rights, or went with unique designs instead of these uncanny valley dollar store knockoffs that attempt to trade on the familiarity of the MCU characters. These characters existed before the MCU, put a new twist on old designs.

For me its the gameplay. If the gameplay is good after 15 minutes I’ll have adapted to the new look. Yeah I’ll feel it at the get go, but if the game is good enough, I’ll do fine. I actually experienced my first Witcher game after the TV series. It went exactly like that – because the game was good.

To me, it’s all just window dressing.

If the Marvel multiverse is so vast it has thousands of different versions of the same exact heroes in different possible outcomes, then not only are you going to get little oddballs like Spider-Ham and Spider-Gwen, but folk who are just a little bit different, like Peter B.

So whatever. Make ’em close to the original comic, or closer to the film. Make ’em with a gross little beard, but just don’t make ’em looking like Chris Pratt, because then you have to pay the guy, and then there goes your budget.

True to a degree, but sometimes it’s pretty cut-and-dried. Characters like Rocket and Wolverine are grumpy and aggressive. Spider-Man is jokey and flippant. Groot is earnest and seemingly simple at times. I think there’s a lot of characters that the MCU, and other Marvel movies, didn’t really change that much from how they’ve been depicted in the comics for years.

Square : “I’ll make my own marvel universe with blackjack and hookers”

Spider-man didn’t have this problem at all. Insomniac’s take on Peter Parker looked fine, even with the change in appearance for the PS5 version. No comparison was made to any of the live-action actors. If they could pull it off, it’s weird these devs can’t.

Definitely a problem that I have with the continued push towards making everything more sharp and photorealistic. One of my favorite game franchises is Borderlands and I give them a lot of credit for having its own style. Yes I’m sure someone can point out graphical/stylistic influences on their style that prevent it being truly “unique” but it at least gives its own feel to the games. I’d think that’d be a really smart move for Marvel games.

GoG is the worst marvel to me anyway