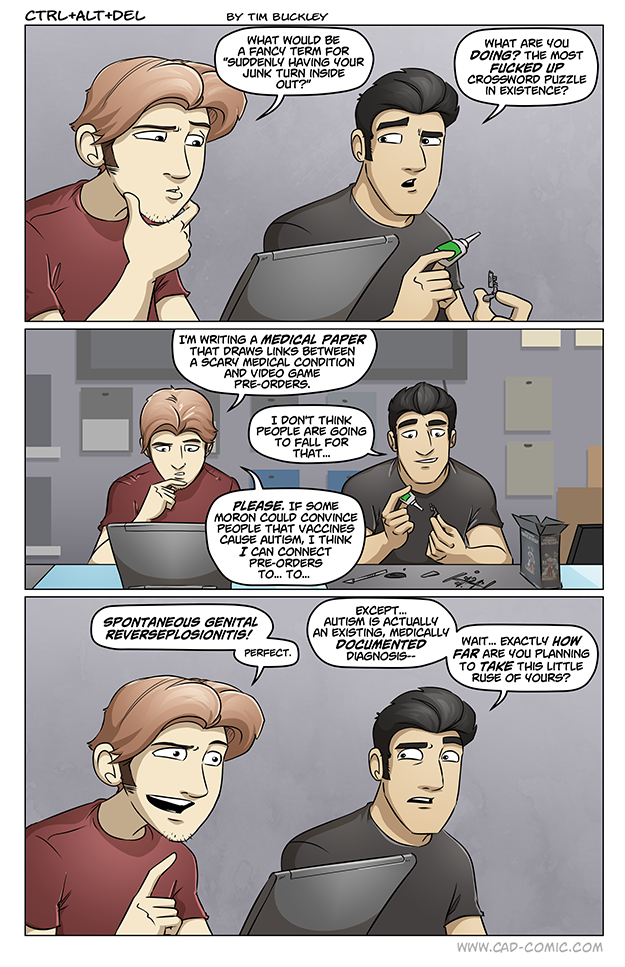 You know… I found this with “there are no comments” and I found that very appropriate….. lol

And now you ruined it. Good job.

Pretty sure it is the Primaris Apothecary

Is lucas making some primaris?

Or the primaris apothecary.

I would put money on that being a Primaris Apothecary. Specifically, I’d put $35 on it. 😛

Oh yea didnt see the box next to him, only the hand holding a boltrifle…which is in the other hand on the kit…and isnt even a bolt rifle…come on Tim consistancy lol

Inb4 the antivaccine loons find this. You big pharma shill, you.

Well, there _is_ a medical condition called “Cello Scrotum” which turned out to be an elaborate hoax that somehow made it into published literature. Apparently, two doctors heard of “Guitar nipple” and “Fiddler’s neck” and thought they were hilarious, and made a bet that one couldn’t publish a paper on an entirely made-up and hilarious-sounding condition like “Cello Scrotum”, based on zero evidence. Turns out that, in medicine, you can. So establishing “Spontaneous Genital Reverseplosionitis” may not actually be as hard as you think.

Oh dear!
Base logic (or the lack thereof) and precedent!
It’s giving me the vapors!
😉

Lucas, this is ETHAN we’re talking about here…………..
You actually need to ASK that question?

As someone who was diagnosed with it by a professional: Nope.

I have Asperger’s. Autism is very much real.

Out of 6 kids, 1 has aspergers, 2 have ADHD, 1 has ADHD/ODD and 1 probably has Aspergers (though not as bad, but is too young).

i can tell you that things for the other kid are so much easier than the one for the Aspergers.

The thing about Aspergers is that it is a VERY wide spectrum. A middle school friend of mine was diagnosed with aspergers, but he still had QUITE a few friends and was very smart. However, he had trouble picking up on subtext and the like.
I’ve also met people who had kids who I could probably tell they were Autistic if I bumped into them while walking down a sidewalk.
It all varies. Everyone is unique and everyone has the manias.
Have a nice day. 🙂

Most medical papers begin this way. Remember the huge fad, where it was reported chocolate actually helps you lose weight? Constructed by a german scientist, who wanted to showcase how easy it was to get bad research published. He purposefully used a small sample size, and measured a lot of data, which is guaranteed to get you some sort of correlation. He came clean about right after it was published, revealing the hoax. Yet people STILL believe his original research years later.

I hope this doesn’t end up being as bad a hell hole of a comment section as the Far Cry 5 comic…
Here’s to not dying.
*shrug*

I wonder if that will fail hilariously or will give minor benefit.

On unrelated note… Do you think the No Man’s Sky multiplayer update will change anything for the game? It does not feel like it will be great breakthrough, with not exactly refined mechanics of game.

It’s enough to make the game a THING, but it is so late after such a failed release (too much hype, not enough ego fulfillment) that it won’t revive it, though it will make it a much more existential game, as well as one with a MUCH bigger community.
Hopefully it won’t wind up being in a couple decades 47% of the game’s planets are named assorted types of genitals….
(though a unique planet naming system might help, so there can only be ONE “Bigballz”)

As someone with AS, the jab on the whole mercury vaccine thing was very much appreciated. Such BS.

You Know Ethan is going to be right about fighting pre-orders for this game, but for the wrong reasons

I wanted to share this on Facebook using the Facebook button below the comic, but unfortunately it shows the preview image as the SumoLounge ad on the right-hand side. Nothing against Sumo, I do own one of their pillows, but you may want to look into that since it’d be a lot better to have an image of the comic showing up.

Unfortunately it seems Facebook combs the page for images in some order that doesn’t put the comic first. Via desktop you can unselect the images you don’t want. Via mobile, you’re stuck with whatever image it picks first.

I’ll ask if there’s something we can do about that.

There is something you can do about it. Implement open graph headers (http://ogp.me/) Most sharing sites (including Facebook) respect those headers.