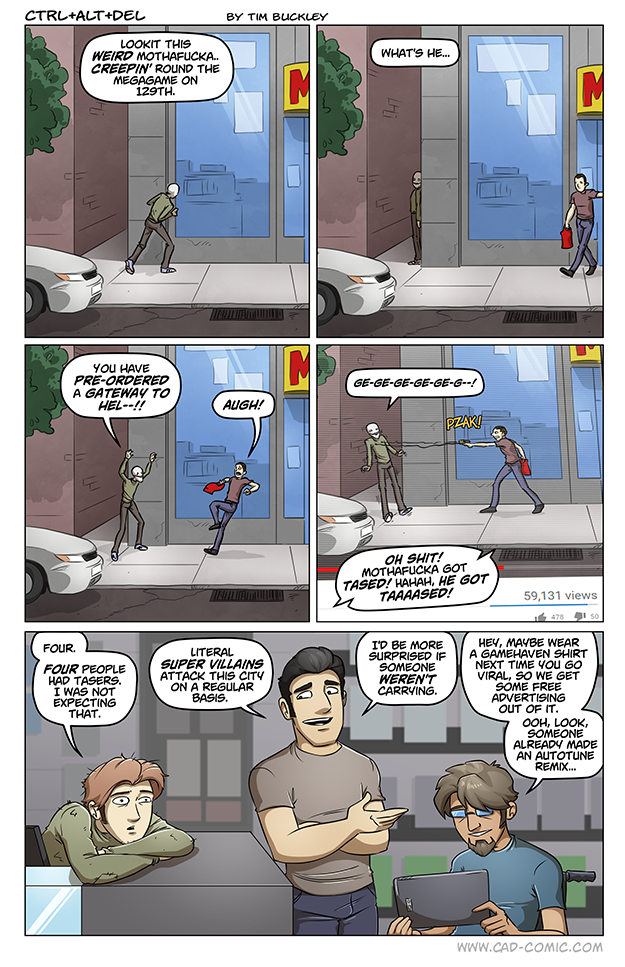 A few weeks ago my buddy Andrew over at SUMO reached out to me to ask if I’d like to try a new chair they’re offering. He described it as “a new take on the Omni” (their very first chair, the one we used at Digital Overload). “Removable cover, spandex material and a smaller Micro Bead.  It is more comfortable and suitable for children.”

Children? I thought. Hey, I have some of those! Sure, why not!

And then I all but forgot about it until a couple of weeks later a giant box showed up on my doorstep. Since this is a new product, I didn’t really know what to expect; it wasn’t available on the website yet. When I first opened the box, I thought it was a giant version of one of those water snake toys. I guess it’s called the Omni Flex.

Now, apparently this chair went completely off the grid for a few days while in the custody of UPS. As in, they had a giant empty box and no chair. Eventually the beanbag turned up, and they sent it along on its way to me, but I have no idea what this thing went through. I do know it arrived with a giant, black smudge on one end. Either it got stuck in one of the sorting machines, or the UPS guys were using it to slide across the warehouse floor.

The chair’s skin, carefully flayed and preserved. In other words, the removable cover removed.

SUMO offered to send me a new cover, but I figured what better opportunity to see how kid friendly this thing really is. Because if you have kids around furniture, they’re going to spill shit on it. So let’s see how hard this is to clean.

Now, this dirt was ground into the chair; the surface of the otherwise very smooth and soft material was a little rough as testament to the abuse. Plus, who knows how many butts had been on that chair during its journey. So I took off the cover (a nice advantage over the original Omni), and noticed the tag said “Hand Wash Only.” Blech.

Then I realized my washing machine has a setting that says “Hand Wash” on it. Hah! Take that, stupid instructional tag.

Why do myself what I can make a machine do for me?

Also I figured hey, I didn’t pay for this thing, and whenever I get free samples I give them away for tournament prizes at my LGS after I’m reviewed them anyway. So let’s see what happens if you put this in the wash.

The tag also said “Do Not Tumble Dry”, but I did that too.

I’m not advocating that you should do what I did; ignore the instructions at your own risk. But I’m a rebel, and they haven’t invented an instructional tag yet that can cage this wild spirit.

Anyway, my cover survived just fine. And 99% clean to boot. Which is impressive given how embedded that oily dirt was.

So once I had a sparkly clean and fresh-smelling Omni Flex, it was time to figure out how to use it.

The cover is made out of a really smooth, stretch material, almost like a thicker spandex, or a thinner neoprene. There isn’t a lot of texture to it, but it seems to have a nice balance between malleability and elasticity. Inside there are definitely little beads, as opposed to clumps of memory foam like the Titan and some of their other chairs have.

Since there were no pictures on SUMO’s site at the time, I had to guess at the different ways to use it. Most obvious, I suppose, is simply lying on it.

I have successfully lied down. Which in this house means 30 seconds later there’s a child crawling on me.

This was very comfortable. The chair feels pretty floppy on its own, but once you displace the beads with your body weight, it firms up really fast for great support once you’ve settled into your perfect position. This is actually something I kind of miss with my Titan; I love that it’s massive and feels like flopped down onto a big pillow, but it’s always squishy. No matter which way you move or turn, it’s soft, which sometimes isn’t so great for achieving certain sitting positions.

The Omni Flex, like the Omni before it, manages to hold a nice firm shape when you’re in it, but is also a lot soften than the Omni was (I always thought the Omni’s cover, while very tough, left a bit to be desired in the comfort department).

So yeah, lying down was great. I was happy to watch TV from this position for a couple hours at a time because, again, it felt supportive enough that my back wasn’t stuck in a slouched or curved position.

However playing games this way was less than ideal; I like to be sitting a bit more upright when I use a controller, and especially if I’m using my Switch in handheld mode, lest my hands start to go numb.

You can curve the Omni Flex just if you prop it up against something (a wall, a couch, whatever), which lets you sit upright, but as far as I was concerned, the chair was useless if it couldn’t do that on its own. Fortunately, I found that if you stand the chair up vertically on one end, and then sort of sit straight down into its midsection, you can displace the beads quickly enough that the back of the chair goes rigid, giving you a comfortable upright seat.

I’m sure there are other ways to use the chair as well. On your stomach. Lying on the floor with the chair covering you like a voluptuous tomb slab. You could even sit two people side-by-side. Though the chair isn’t deep enough sideways to offer back support to two people, it would be more comfortable than sitting on the floor. Unless your floor is also made out of beanbag chair.

And if you’re a child, well… it’s probably just about the most amazing thing on the planet.

It’s been a week, he’s still there. Actually, I’m not sure he knows how to get off it…

So there you have it, the Omni Flex.

Disclaimer: As mentioned above, I received this Omni Flex for free for the purpose of doing an honest an unbiased review. I’ve known the guys at SUMO since they sponsored the very first Digital Overload back in 2006.

Shortly after this story wraps! I’ve been chipping away at it, so hopefully not too much longer to wait 😀

[Rollie gazes at you with soulful eyes, but says nothing.]

Super villains attack the city? Haven’t seen one in ages. Might want to keep your Patreon-only story line separate from your real story line.

There is no difference. It’s all the same story.

It is a general comment from how I read it. They are in a superhero/supervillain universe, so why wouldn´t there be fighting off screen.

Plus, they’re not even the mainstream heroes of the city. They’re small time. So in fact, MOST of the big villains that attack the city, they aren’t even involved with.

See also:
Evil Plan. A great webcomic that has that sort of a scenario what with there being a whole bunch of villains and heroes about.

Just because Analog and D-Pad haven’t been getting involved in any super villain attacks, doesn’t mean there are none. In fact, I’d say their lack of participation makes sense, given they’re still, from what I understood, rookies.

Makes sense. If you live with the threat of super villains wrecking your normal day, people will arm themselves. Luckily no one carried a gun around, but then he would have just respawned. XD

Hey, that could be ANY person who can fly, shoot lasers from his eyes, be shot with a bullet and not die! It doesn’t HAVE TO be Superman!

Could have been the birth of undying scarecrow. Maybe one of his copies came back to life as such a super villain and wants revenge on his original. XD

Fuck carrying a taser, I’ll carry a sacrificial sword with me everywhere I go

I….
I’m scared for your family right now…
If you lugged around FFTA’s Excalibur around while having reflex and keeping yourself Concentrated on the other hand, THAT would work.

My family already questions my sanity. I’m going to end up filling someone’s face with staples, then cutting something of his off and force feeding it to him. I think I have problems, but I don’t care. 🙂

I’m really liking this storyline! It’s a nice low-key break from the action, and Ethan’s antics remind me a lot of the sort of thing he’d get up to in the old version of the comic, as does Lucas’ “Ethan…!” attitude.

Wow, Tim, the kids are getting big quick! I remember when mine was that small, and I just took him to his first day of kindergarten. Does the spandex-like material of the cover pick up a lot of dirt from the floor?

Heh.
My cousin is incredibly large, when he was in 2nd grade he was taller than I was in 4th. (Incidentally, he also has ludicrously strong vocal chords)
It’s not a matter of time to growth, but a matter of growth to average.

No, surprisingly I’ve not experienced it picking up any dirt or pet hair or crumbs or anything.

I cackled out loud in my living room. Nice the see the old Ethan back in action. I missed that guy.

Off topic mate, but the new Silly has a bad link, just thought you might wanna look into it 🙂

Until the link gets fixed, here’s the dialogue for you:

“No Man’s Sky is releasing a huge update, with tons of new stuff including basic multiplayer.”
“Wow, maybe we should go back and give the game another chance.”
-Beat-
“AAHHAHAHHHAHAHHHAH!”

Talk about mean-spirited, I’ve been having a lot of fun with the new Artemis plotline.

I thought the purpose of NMS was a bit like Minecrafts: Run/fly around, explore magnificent terrain that no one else will probably ever see/care about, and maybe blow stuff up.
Not neccesarily having good NPCs besides animals, and not necessarily having a coherent plot if any.

Also I appreciate how Scott is enjoying revenge after ALL THOSE YEARS.
ALL OF THEM.

Hi. Love seeing Ethan and Lucas back please keep them in.
Also your kids are adorable. How old are they now?