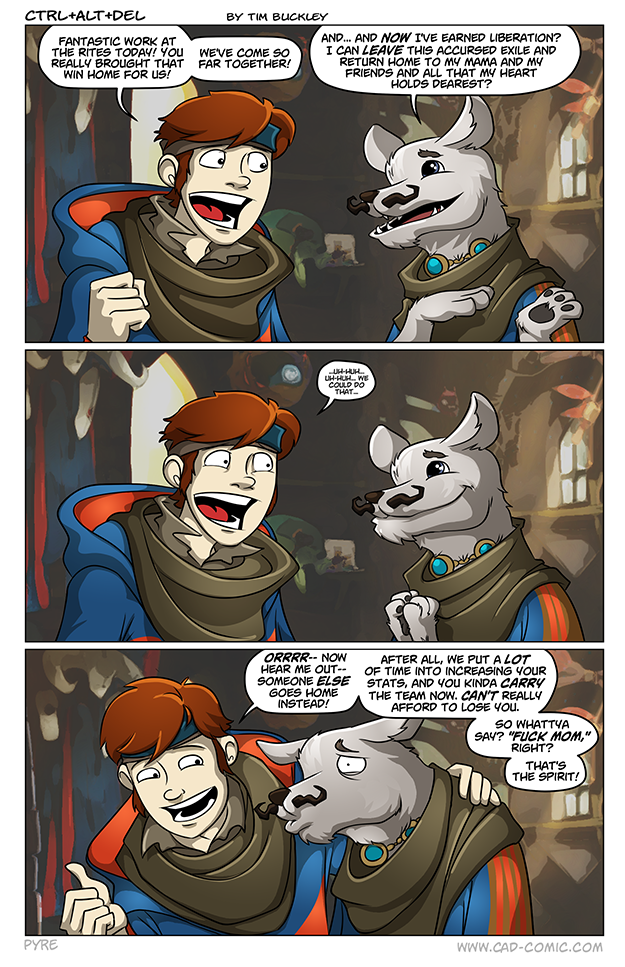 Pyre (PC/PS4) is one of those games that I’ve been really looking forward to, but I’m not quite sure how widespread the awareness of it is. It’s likely many of you have never heard of it, and if that’s the case, I hope if nothing else this comic serves as impetus for your enlightenment on the subject.

Pyre is absolutely stunning. The newest game from the creators of Bastion and Transistor, Pyre is a fantasy adventure wrapped around a magical 3v3 team sport with all of the gorgeous artwork and amazing soundtrack you’d expect from SuperGiant Games. I strongly urge you to check it out; this is one of those cases where every penny of the $20 cover price is worth it, in my opinion.

In Pyre, to sum up, you traverse the lands participating in Rites, ancient trials which culminate in freedom from exile for your team (each banished for some crime they committed). Played 3v3, your goal is to move a celestial orb into your opponent’s blazing bonfire to weaken it.

Your Exiles exude an aura around them that, upon contact, will temporarily banish opponents (like sending them to a penalty box for a few seconds). If you pick up the orb, the orb absorbs your aura, leaving you open to attack. You can also only move one of your Exiles at a time, leaving the other two stationary, so a clever combination of positioning, passing, jumping dashing and attacking are all required to get the orb to the Pyre.

It’s a relatively simply concept that is fairly easy in the early game as you get your feet wet, but through the introduction of various characters, all with different strengths as weaknesses, as well as a skill tree and talismans that further tweak an Exile’s abilities, it quickly becomes a deep contest you’ll be wishing you could take online (currently versus is local only; no online component here).

For example Jodariel, one of your first companions, is a large horned demon. She is painfully slow, but she emits a massive aura, making her key for field control. And, should she make it to the Pyre with the orb, she causes more damage to its flame in exchange for her low speed. Conversely, a quick and nimble character like Rukey does less damage to the Pyre.

The sports matches are fun and engaging on their own, but the entire experience is wrapped up in a world beautifully considered, and environments hand-drawn with a fantastic mix of gnarly and whimsical. As I mentioned above, there is a lot of reading involved in this adventure; artwork is mostly static save for some visual flair for tone. However what you’ll find here is an intricately crafted story with not a single uninteresting character in sight. Every companion or adversary you come across is someone you want to learn a bit more about, and watching your teammates interact is hugely rewarding.

I love that during dialogue, certain keywords will be highlighted allowing you to hover over them for a bit more information or lore from the world. I found myself gobbling up every little snippet of info about the Downside, the strange realm we were all banished to, and anxiously awaiting opportunities to ask my fellow Exiles what crime they’d committed.

Of course, this all lends to getting to know and love your companions, personally as well as on the playing field. So when the game presents you with situations where you can perhaps fulfill a teammate’s every hope and dream, but at the cost of losing them from the team, it becomes a gut-wrenching decision with lasting effects. And that, I think, is where Pyre really shines. It not only asks you to choose between doing what’s best for your friends and what’s best for your team, but also forces you to adapt based on those decisions.

It’s an experience that is going to stick with me for a while, and even begs replay for a handful of reasons. At $20, it’s a steal (I highly recommend playing with a controller over a keyboard/mouse though).

Hell, it’s worth it for the soundtrack alone.

i keep getting notifications on it from steam. But thats about it…

After Transistor and Bastion, I can’t wait to sink my teeth into Pyre 😀

I’m watching it currently, but I need to agree that it falls very short of Bastion and Transistor – by, a lot.
Not really hyped or interested at all – but yes, the art is exceptional once more.

Well, all I can say to that is that I hope you change your mind some day. I think you’re missing out on a great game. But if you don’t trust SuperGiant after Bastion and Transistor, I don’t expect I’ll change your mind.

I actually do want to play the game someday, I just haven’t played it yet! And I explode into sparkles when I really like something >w<

I loved Bastion and Transistor, but I can’t help but feel that this sport thing seems out of place. You’re probably quite busy, but do you have a moment to enlighten me on the feel of the story and its interaction with the game element?

I’m not sure what you mean “out of place?” In the game, there is a shining, beautiful society, and if you do anything wrong or illegal (such as reading, in the case of your character, which is forbidden), you are banished to the Downside, a bleak wasteland, for all eternity. You are told that exile is irreversible, but passages found in a book tell you otherwise; that there is a way to earn liberation and pardon back to society. That is by joining a triumvirate and competing in Rites, trials of skill, against other teams also hoping to earn their… Read more »

Interesting. I think I’ll go ahead and pick it up. By “out of place”, I meant “did they take a sports thing and wrap a loose story around it” – like if FIFA decided to implement a storyline of some sort. It sounds, from what you’ve described, that the story is quite interesting. Which is what I’ve come to expect from SuperGiant. I’ve never been great with or intrigued by sports games, which is what has me concerned as far as a sport being an alternative to combat. That’s my only real worry as far as my personal enjoyment of… Read more »

It’s a “sports” game in that that is the easiest descriptor for a 3v3 mechanic where you need to move a ball to a goal.

But make no mistake, it is a unique thing in execution.

… So you’re basically an NBA/NFL player?

It’s a much deeper game than it appears in trailers. The main game has enough elements of variation (play fields, aura effects, speeds, abilities, and enemy “enrages”) that it gets to equal levels of sophistication as Bastion or Transistor. It’s much faster-paced, so small variations in play matter much more.

*wakes up a few hours later*
Wha-
W-whose tears are these?

Also what do you do when only one guy is left…

Actually in such an instance it would seem most practical to end with a nimble character who can dodge opposing people by STAYING THE HECK AWAY all the time.

Shame there isn’t online multiplayer, I think I’m the only one locally who would play this 😐

So if the Exiled get to return home as their reward, what do the Chaste get?

To groan at the question?

Just starting the game myself (my limited playing time is torn between it and Andromeda). I love it so far. Do have to say that so far Rukey is definitely carrying my team, so this comic resonates for sure.