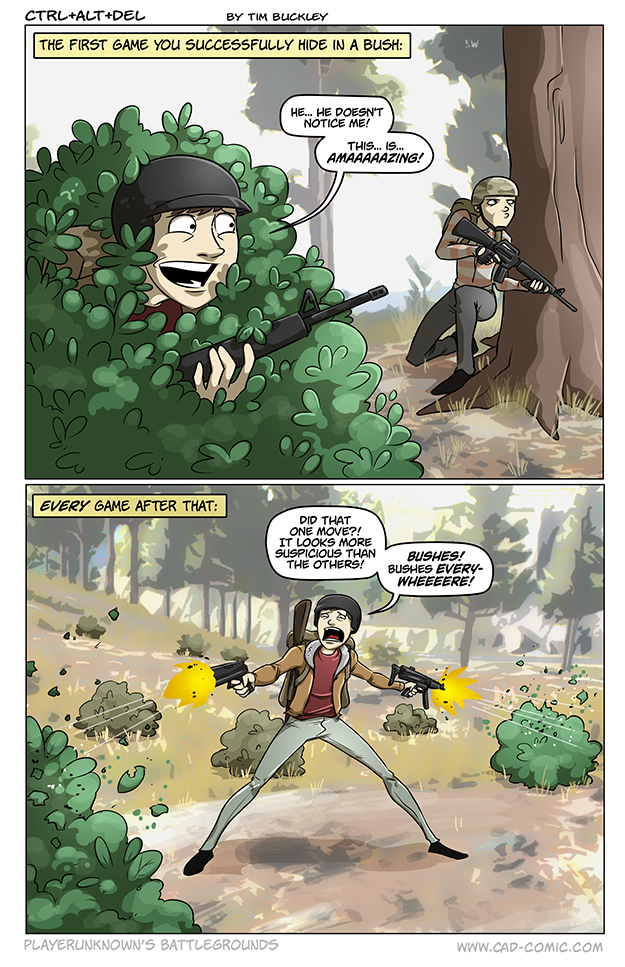 I won my first game of PLAYERUNKNOWN’S BATTLEGROUNDS on April 9th. I did so by running into a bush at the center of the final zone, which somehow nobody saw me do, and crouching down. There were four other players around me on all sides, and not a single one noticed I was there. They were too busy studying the trees they expected their foes to be behind, and completely ignored the bush, even though I was not 100% concealed.

Even when I started lobbing smoke grenades at one guy behind a tree, he could not figure out where they were coming from. He ended circling around the tree, giving me a clear shot at his backside.I won when the last guy, still uncertain where I was, backed right towards me, still scanning the trees in the ever-shrinking safe zone.

And I have been freaking out about bushes in this game ever since.

It’s the worst when I don’t have a good scope, because at a distance the subtle movement of the bushes in your peripheral vision can really play tricks on you. Is that the pixels shifting, or is someone in there?

It’s interesting that in the few months I’ve been playing PUBG, my indoor/outdoor comfort level has reversed. I’m curious if that’s happened to anyone else.

Whereas in the beginning I only felt safe indoors, walls around me, clearly defined entrance points, a place to hide, now I’m more at ease hiding outdoors. Most buildings have started to feel like death traps; stuck upstairs, only one way out, someone possibly below. If someone hears you inside, a well-placed grenade can make short work of your tiny room.

The dirty fucking windows on most buildings restrict vision hindering your position more than helping it. Even if you spot someone through their narrow fields of vision, the chances of lining up a successful shot with all those bars and grates are slim. And then you’ve just given away your position shooting at the window frame.

No, give me the wide open spaces these day. Sure, you’re exposed, but if you’re not moving, chances are people will glance right over you anyway. You can see in all directions, nobody’s sneaking up on you, and if they do spot you, chances are you’re far enough away that they’ll struggle to track a shot while you find better cover.

Don’t forget the part where players start lowering the video quality to remove bushes so they can see you “hiding” in that bush.

I thought they patched that out a while ago? Everyone sees the same level of foliage now regardless of system settings?

You are correct, this was patched out almost 2 months ago.

I definitely find myself to be far more comfortable outside now. Using the terrain for cover is far more effective than buildings and trees.

Yeah that has been patched out. I find crawling in long grass to be quite effective too

My mistake. I don’t actively play PUBG, so I was going off of past reports from friends, and other games that do that sort of thing :/

I had a friend who did that with his younger cousin only it was with Minecraft and hiding in tree leaves.
Basically, his cousin always had the transparency of leaves off, while my friend kept it on and then used it to snipe him with well timed crouching.
Same basic concept I think, though slightly different in some ways

I definitely had that same progression. Although for me, it has continued in such a way that I now don’t feel even somewhat safe, ever, because I’ve been shot too many times while outside, in situations where I was as sure as I was ever going to be that I was alone. Double checked, triple checked the entire surroundings, only to be taken out from the exact spot I looked at, and STILL not seeing the guy who did it.
…
I don’t play this game much any more…
– .-

Tim, this is why spending some of your life playing Pokemon is good.
Re(dis)member: Wild [Insert Opposition Here] like to hide in the tall grass.

I honestly thought the last panel was going to be two or more bushes shooting at each other.

I never considered hiding in a bush but I read this, hid in a bush, and scored my first chicken dinner today. Now I shoot at all bushes with wavy pixels.

Might I recommend you check out the youtube player Aculite? Quite possibly the best PUBG player out there, a lot of excellent strategy to be studied and learned. He also has very minimal commentary, and no stupid face cam.

i’m not a big fan of wide open spaces. i like when it lands on one of those one story yellow buildings with the back room with no windows. i also like having a hill or two to run around in the final zone. i’m more comfortable in buildings but i also don’t do solos. Side note, does anyone else cringe when it lands on ruins? The place is like my Achilles’ heel.

Hey, that’s even a real-life combat tactic. It’s called “Recon by Fire.” Also described as “When in doubt, grenade it out.”

Stay away from those bushes. Those are also some Bushes Of Love.