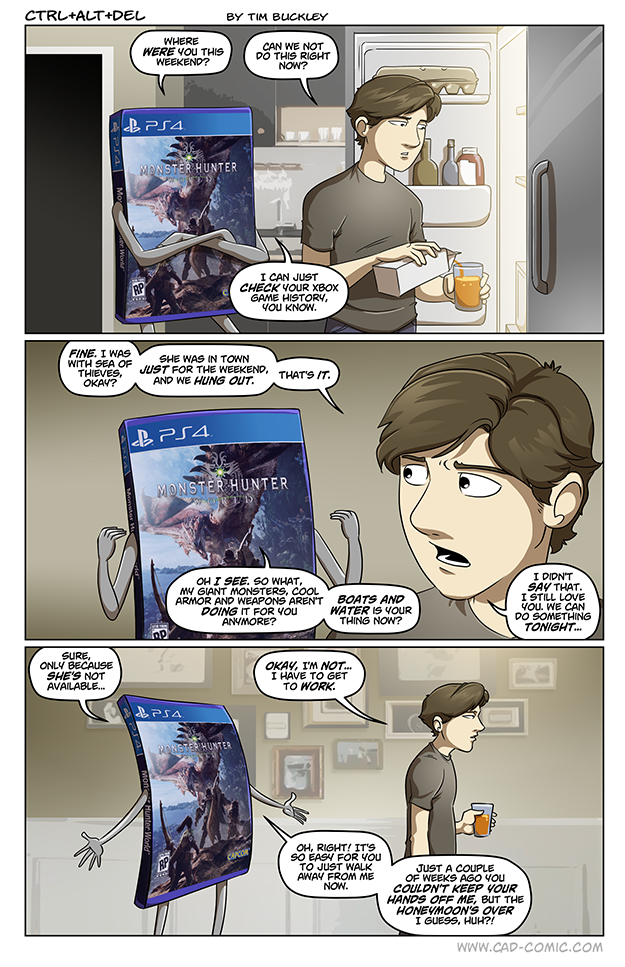 Totally made my day 😀
Although I don’t play the game, I’ve experienced the same with other games 😀

oh god…it’s so accurate it hurt’s.

Don’t you even think about breaking up with World. She deserves better than you anyway!

This is literally why I have so many unfinished games. It’s not that the game itself is uninteresting; Lord knows it’s gripping enough. It’s that something else came up that grabbed my attention. And if that something else grabs my attention for too long, it’s just too hard to get back into the game. It’s why I’ve never yet completed Super Metroid, despite having owned it on two separate systems. I play it, love it, get distracted, then I jump back in and am like “OK, so where the heck am I even supposed to be? I’ve got this new… Read more »

I never finished FF8 because I got distracted by playing Triple Triad (best minigame ever) and then I started playing something else.

You know, I hate to say it, but you’re probably not missing much. FFVIII starts out epic and exciting, and gradually gets less and less interesting and appealing as time goes on. I completed it, but honestly, it probably had more to do with me being a 14-year-old kid who only had two games on his PS1 than with the fact that I really enjoyed it. If I bought FFVIII today, I probably would’ve stalled out around Fisherman’s Horizon. I *loved* Triple Triad. I could never really get into Tetra Master on FFIX, which kind of sucked because of the… Read more »

It’s because Tetra Master is so maddeningly RANDOM. Triple Triad, you can tell before you play a card what the result will be (the ONLY thing I could never remember was if you applied Elemental before Same/Plus) – Tetra Master, you’re usually making a semi-educated guess at best.

Brent
Reply to  The Legacy

Wait, he still has one of those? Is he aware of this?

Urazz
Reply to  The Legacy

Tim’s wife just used him as a sperm donor and as a glorified babysitter called ‘dad’ so if anything, I think Tim got the raw end of the deal. 😛

This happened to me with Shadow of War. I got past the first several regions, and then along come the Switch. Talion had no chance against the Hero of Hyrule and the Mushroom Kingdom Crew. Then along came Civ 6:Rise and Fall, then Sea of Thieves….eh I’m sure Frodo’s got it handled.

Yeah, I know how that goes. When I first got last of us, I just stopped playing other games for about one month straight and just kept replaying TLOU, relishing in her beautiful graphics and deep story and…..and…..

Huh? What? Sorry, lost myself for a second.

My issue with the early MH is that once you get past the first or second set of quests (like once you complete the High Rank quests in MH3) you are basically doing amped up versions of the same fights. And it gets tiring. Here, have a wall of text. Some years back I found a GBA emulator from aeons ago and it had MMBN on it. The whole series, 1-6. Each version too. (Also many other GBA gems) I played the first 3 and those were fun at the time! They had soured a little with age, but you… Read more »

Just think. I “cheated” for Mass Effect: Andromeda for a few hours.

I need to get it finished up.

Nah… You really don’t need to. Save yourself the disappointment.