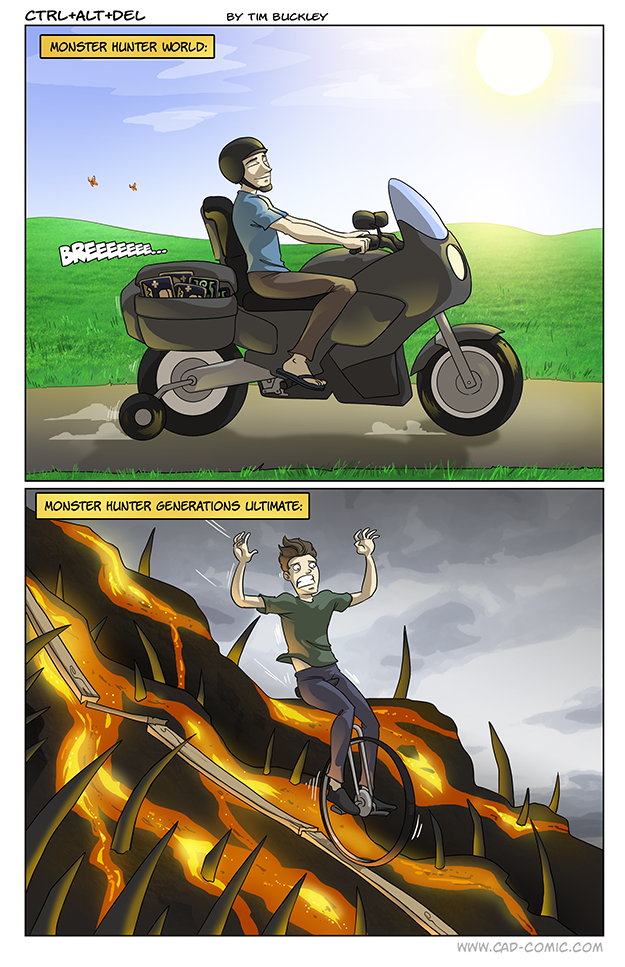 I’ve been playing Monster Hunter games since Freedom 2, so it’s not like I’d entirely forgotten how we used to play Monster Hunter… but I still experienced a bit of system shock when I fired up MH Generations Ultimate yesterday. Maybe playing so much MH World had softened me up a bit, but suddenly all of the changes it had made to the formula were thrown into stark contrast.

I figure we have a lot of new Monster Hunters this year, thanks to World, and they should probably be forewarned, lest they buy MHGU thinking they’re getting more of World’s gentle touch.

Obviously, it’s not entirely fair to compare the two games, as Generations Ultimate came out nearly two years ago, but it’s also impossible not to draw comparisons given that World came out right before this port.

Personally, I’m finding myself a bit torn between the two approaches. On the one hand, I loved MH World. I recognize a lot of ways in which World streamlined things for the better, little things that I didn’t realize how much I appreciated until they were taken away from me in Generations Ultimate: Lack of zoning. Drinking while moving. Always having a whetstone. Not having to pack pickaxes, etc. Part of me sees the way in which these things smoothed out the whole experience, made it more fluid and comfortable.

The other part of me, however, having now played a bit of MHGU, can’t help but feel that they contribute to making MHWorld feel… too easy.

Maybe that sounds a little snobbish, and maybe that’s partly coming from a place of nostalgia because it’s just how I played Monster Hunter for the past decade (“When I was your age, I hiked to school uphill in the snow, both ways…!”), but I do feel like there’s something about the restrictions of the classic formula that really made you have to strategize and hone your hunting skills in a way that being able to run back to the tent and swap gear, re-food, re-up potions, etc doesn’t do.

There’s also a pretty big contrast between the monster count (thirty-something in World to 90+ in MHGU!) and of course, the big one: G-Rank hunts. It feels to me, at least at the moment, that MHGU is overall a better Monster Hunter game. But if you’ve only played World, you should be aware of what you’re getting into: it’s a less pretty, slightly clunkier, slightly grindier, and less forgiving than MHW. That said, if you’ve conquered all World has to offer, then MHGU is definitely going to provide a better challenge, and lots more of it. And regardless of the bells and whistles (or lack thereof), when you get to the meat of it, the monster hunts, it’s just as exhilerating as anything World has to offer.

And speaking of G-Rank… I’m still curious to see if/how MHWorld will handle G-rank; typically it’s been the domain of a title re-release, but I’m not sure if that will sit well with the scores of Monster Hunter newbies who aren’t used to buying multiple issues of the same game. If they patch them in via downloadable content (which seems likely but also seems like something they’d want to charge for), I think that would be a great opportunity to also include the classic restrictions for maximum challenge. No changing gear during the hunt, you bring what you can carry and that’s it, etc. That would provide a nice ramp-up through World’s easier, hand-holding early game into what myself and many others consider Monster Hunter’s true end-game, G-Rank.

Hmm the comic itself does not seem to show on your site, but does on the preview on FB.

I loved World. Don’t think I have the time for “real” Monster Hunter.

If I’m being super objective about it, MHGU is definitely a step backwards for the series (obviously literally, but you know what I mean). MHW took a lot of positive steps for the series, and I love it.

It’s just that MHGU is a step backwards that I’m really familiar with, and so it makes it easier to sacrifice World’s perks for the content/challenge in MHGU.

For someone whose only experience is World, though, I picture that being a much tougher trade.

I think it’s a bit like spice. You get familiar with some pains and start to enjoy them. That doesn’t make the chili that doesn’t make your forehead sweat less tasty, or anything. They’re just doing something different. I figure the Monster Hunter series’s repetitive nature would go great with multiple difficulty… sorta the way Dark Souls does. I mean, if you feel like the first run is too easy, do it again tougher. Add that spice to the mix until you’re happy. Because starting with too much spice makes new people’s faces melt off and the screams just give… Read more »

That is definitely my situation. If World was as hardcore as MHGU, I’d probably not have bought it.

I also hope they continue both styles of games. Some of us are ok with a less meaty game that we can enjoy more without quite as much grinding and management. I know others want that. So either bake both into one game and give people the option. Or continue in the line of both.

The training wheels are a nice touch.

I’ve played a few Monster Hunter games since the first one, but World is the first one I’ve REALLY gotten into. The reason for that is I can focus on fighting the monsters themselves, rather than fighting with the game and it’s mechanics. I no longer feel like i’m struggling against these weird limitations and clunkiness. I can just enjoy the hunt for what it is.

I agree that World did away with a lot of mechanics that were a little outdated. The old games just sort of throw you in without a lot of explanation, and you have to figure it out. In that regard, World is fantastic for easing you into the game.

I just feel like it’s still missing a real “end-game” for those of us that have played a lot of MH, and that’s something MHGU has right now.

MHW really just needs more time, like the previous games have had, building on top of one another. MHGU isn’t just that game, it’s the culmination of the series so far. If MHGU did away and redesigned those outdated mechanics, they’d have to redesign the whole game which would take away from other areas. MHW is a new step where they had to do the monsters and everything from ground up which was like going back 10 games in terms of content for the sake of building something new, so there was no way they could build a roster like… Read more »

The quality of life improvements of World make going back to any older MH almost too painful, despite their better monster counts (though there is A LOT of padding in older MH games). The only thing I would really change in World 2 (when it comes out, because no way is CAPCOM not going to make a sequel to their most successful game EVER) is to make it so that in HR/G-Rank you can’t change weapons or re-up on items. Let LR be the training/introduction to the game where you’re free to experiment, try new things, screw up a bunch… Read more »

I guess I disagree with your first points. 10 years of playing MH-that-was versus three months playing World. It’s not enough for me to forsake the original formula, even though I recognize the system shortcomings (honestly, I think we all recognized them long before World fixed them, but their tedium had a bit of charm in a way). I wholeheartedly agree with your second point, though. G-Rank needs those limitations as a measure for truly testing a hunter’s skill. I love World, it just doesn’t feel finished to me, like a WoW expansion where they don’t release the raid for… Read more »

Honestly all I think that really happened between older Monster Hunter games and MHW was that enemies just have less HP And that isn’t necessarily a bad thing. Having enemies just be beef walls as a method of extending gameplay isn’t really….good practice. As far as I’ve seen I’m still approaching new enemies slowly, learning their patterns, weaknesses, learning what to bring to turn the fight in my favor. Monster Hunter has *always* been making quality of life. Letting you just go gathering rather than go on a mission, adding more weapon types to give players more options, giving you… Read more »

Difficultly isn’t really the word to go with. Anyone who’s tried a Tempered Monster in 15 minute’s Knows what true challenge is. And don’t even get me started with the Behemoth fight. Fact is, all the old mechanic’s were just replaced with new varible’s. Sure you Could scavenge your own whetstone, or you could go fish for one that work’s better. You Could build your own bug net, but wouldn’t you rather have a collection of Cute Pet’s? Some Challenging to gather? We just look at the old mechanic’s and Think they’re necessary for challenge, without realizing that they were… Read more »

Technically it started it’s life on the PS2, but yeah after that it was PSP and the Nintendo, mostly JP Only. Came out around the time of Metal Gear Solid 3 if I recall correctly. But yeah..it’s a hard question of balancing difficulty/challenge with rewards. What’s the real *benefit* of having to beat on a wyvern variant for 40 minutes simply because it has more health in a version of a game? Where is the *fun*? I said it above, I mean I do wish some enemies meant to be *epic* like the Zorah Magdaros were more difficult, but I’ve… Read more »

Well, the challenge in the original games was “Okay, this Wyvern now has more health, but I can still only bring the same number of potions, the same number of paintballs, etc, so therefore my game better be on point in order to survive long enough to beat the monster.” I agree that health/mechanics/etc shouldn’t be padded just to extend a false sense of “more gameplay”, but at the same time it used to be possible to lose a monster for a bit. If you didn’t have a paintball on at the right time, and the monster fled and you… Read more »

Hm, to be honesty I didn’t even know I could re-stock and re-equip until after I got into High Ranking on MHW and I still hardly ever take advantage of it…maybe if I flub a capture, but even then I used to carry two additional traps and Nets in older games. I mean, it’s still pretty OP compared to old games that I can get food at camp, making Max Potions nearly useless, but we used to bring as many Potions as possible and the things we needed to craft more as needed. Honestly, after going back to my PSP… Read more »

This whole discussion reminds me of a recent lesson in a Unity course I’m taking, the idea of the core experience. If you add something to a game it should add to the core experience, not distract from it. If the core experience is fighting monsters, and you have mechanics that just end up adding a bunch of chores that don’t really feed that monster fighting experience, you’re better off getting rid of them. A good challenge in a game is one that makes you use all your honed skills, vs just throwing things in the way. Granted, sometimes little… Read more »