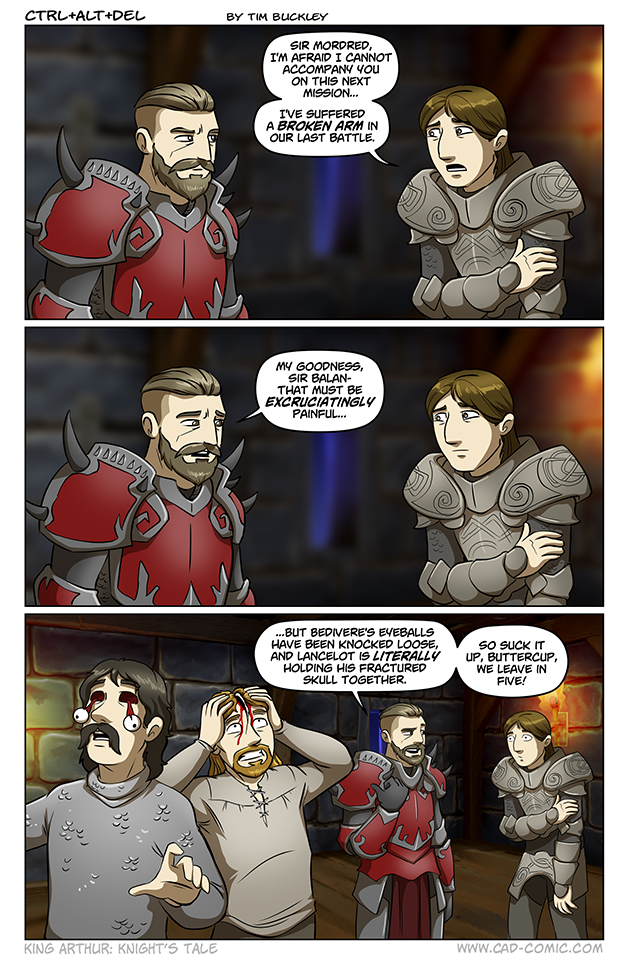 King Arthur: Knight’s Tale finally left Early Access last month, and I’ve had it on my wishlist for quite some time. I’m a sucker for Tactics games, and this one has landed pretty well for me. It’s got most of what I want in a good tactics game: the puzzle of figuring out each battle in the most efficient way possible, with the least damage to my crew, a bunch of cool items and skills to really customize my playstyle, and a boatload of extra stuff in between missions that gives you options while forcing some difficult choices. I’ve been enjoying it.

In Knight’s Tale, you play as Mordred, risen from the dead in Avalon and tasked with hunting down the corrupted and evil King Arthur after you both killed each other in battle. It’s a grimdark take on the Arthurian legend that gives the game some room to play with some of the established aspects of the round table.

In each mission map, there’s some minor ARPG exploration that lets you look for hidden treasure, buff shrines, or even hints to make other sections easier (In one mission I came across a soldier who had been left for dead by his company, the people I was tasked to kill. In his final moments, he wanted nothing more than petty revenge, so he told me his commander’s nickname, which I could holler as the battle started to throw him off his game).

Once you run into some enemies, the game shifts to the familiar XCOM-type tactics grid (and all the stuff you’d expect like attacks of opportunity, overwatch, reserving AP, etc). Your knights have a health bar that is split into two sections: HP and Vitality. HP is sort of like your squishy, padded outer layer; it’s healed with potions and campfires during a mission, or replenishes itself to full in-between missions.

Vitality, on the other hand, is your serious health bar. Once you lose your HP, you start taking damage to your vitality, and this is where things get rough. Vitality is much harder to heal, and every time you take vitality damage, you also risk a permanent injury; something debilitating like doing less damage, taking double damage from poison, etc.

Vitality and Injuries can be healed at special buildings in Camelot, but doing so takes your Knight out of play for a while. It can be rough early game when you have no alternates, but more manageable once you’ve built up a roster of heroes to swap back and forth between. Still, too many poorly fought battles can find you with a roster of “only mostly dead” Knights while your truly fucked up warriors recover.

Plus, the cost and time involved with healing injuries and vitality can rob you of resources you might want for expansion or upgrades. There are a number of buildings in Camelot you can upgrade and assign Knights to oversee, all of which use the same two basic resources as buying potions/items and healing Knights (you can pay to heal them in 1 mission, or do it for free if you’re willing to have them laid up for 2-3 missions). That means every coin you spend is a decision between multiple things you want/need.

There are a number of other layers to the game as well, a loyalty system that improves (or hampers) the strength of your Knights, some of which is tied to a morality graph that tracks your choices throughout the game. On the Y axis you can move towards being a Rightful ruler or a Tyrant. On the X axis you drift towards supporting Christianity or the Old gods. In each of the quadrants are a variety of characters and upgrades/unlocks unique to those alignments.

You cannot have all of them in one playthrough. So if you go Rightful/Old Gods, you can unlock characters like Lancelot and Morgan Le Fay, but The Red Knight will be unavailable to you down in the Tyrant path. It also means that as you drift in one direction or the other, your choices may lose you the loyalty of characters diametrically opposed.

I have heard that some of the game balance can be a little unpredictable on higher difficulties, but I’ve yet to experience any fluctuations that felt out of place. You can play a standard game on a variety of difficulty levels, but I’ve been playing the game’s Roguelite mode, which affords you one save, and overwrites it constantly. It forces me to just keep moving forward, and use a variety of Knights, as opposed to save-scumming for a perfect mission, and just using the same roster of four for the entire game.

At least it’s not Sir Pallas (think that’s how it’s spelled). If that dudes injured at all he isn’t leaving.

Pelleas. Yeah XD I heard there are tomes in the game (randomly dropped) that let you remove/change traits. I haven’t seen one yet (only the skill reset tomes), but it would be nice to be able to alter those.

I absolutely fricking love good turn-based tactics and RPGs. There have been a great number of them over the years and the most recent one I truly enjoyed was ATOM: Trudograd. In that vein, I’ve been eyeing this King Arthur-game for a couple of days: it looks nice, I’ve really only heard good things about it and all, but it’s unfortunately a tad expensive for my budget 🙁

Are there any plans to continue the Analog and Dpad stories? It stopped at a bit of a cliffhanger :'(

LOL Is this a serious question? 🙂

Jokes aside, I’m very personally invested in Zeek… and that’s why it’s good to give that chapter some time to sink in. Particularly in the archive – we have to think about future readers.

Aye it’ll likely return. He has several series that he rotates through, telling a chapter or few at a time, then he’ll close a story, sometimes on a cliffhanger, sometimes on a “oh my” and then he’ll do some pallet cleansing with some game industry strips or The Campaign or Console Wars, which usually have shorter arcs. Then he’ll deep dive into the next arc of Analog & Dpad or Starcaster, which tend to be his beefier series.
If he’s going to end a series – it’ll be an ENDING (likely followed later on by a new beginning). :p

I’m past deepwood right now. The only injury I suffer is from those event on map where you send your nights away for 1 mission to do some stuff.

Based on your description and recommendation (and some reviews) I purchased this game.

Yeah it’s silly. I think the textures and sound are not compressed, which helps it load faster but still… there’s no need for it to be that big.

Thankfully steam compresses game files hard on download, almost half size in many games. Thankfully SSDs have grown in GB/dollar over the years so it’s not a total disaster. 🙂 🙁 🙂

Arthur as the villain and Mordred as the hero?I would LOVE to hear the in story justification for that switch.

As I gather thus far in my story: After Arthur and Mordred kill each other, the lady of the lake takes Arthur to Avalon, where she attempts to resurrect him. In the process, the extreme magic she attempts to wield to bend fate in this way actually ends up tearing Arthur into pieces, corrupting his essence. As Mordred killed Arthur once, the lady of the lake summons him to do it again, traveling this twisted version of the realm to hunt down and destroy the fractured, corrupted parts of Arthur’s essence.

PplI know who tried it told me it was meh, so, idk what to think about it.

where we’re going, we won’t need eyes to see…

How is the story in the game?
I like rpg’s, both real time and turn based/tactical, but I only stay invested if the characters and story are both good.
This one is on my Steam wishlist, but I’ve not seen any reviews praising the storytelling as much as the systems in the game, so I’ve yet to hit BUY button.

Personally I been playing triangle strategy (on switch), would say that its easily best srpg of this year