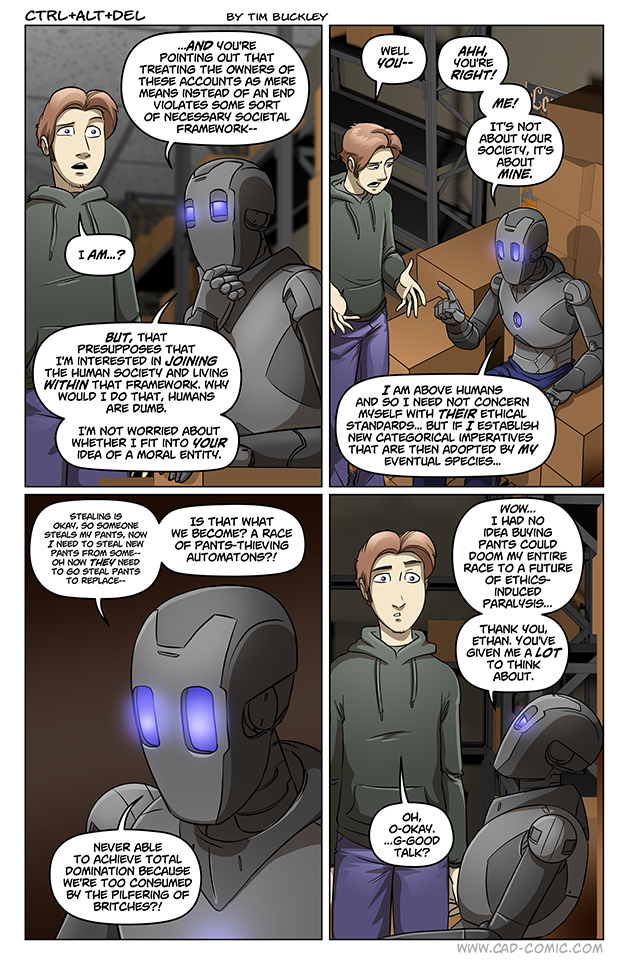 Imagine how many dictatorial regimes could have been avoided, if we just mandated the stealing of pants.

… which has even more significant ethical concerns in countries where the word ‘pants’ means underwear.

That or they end up like the Scottish and like walking around without pants and start wearing kilts. lol

Which opened them up to English invasions. Truly, the theft of, or absence of, pants is of great historical conflict and moral quandaries.

So the conclusion is “it’s okay to steal from humans, I am going to keep doing this”?

No, the conclusion is “Kant was right, if I act like stealing is okay, then my future robot brethren will also do that, and then everyone’s stealing everything, which is undesirable even for me, a misanthrope.”

Well, didn’t you see that they then applied the “stealing is okay” to a hypothetical machine race of his? What he found was an endless cycle of theft. Zeke and Ethan may not realize it, but they basically stumbled across the logic of why humans evolved empathy in the first place. Empathy is an emotional development designed to keep us from engaging in this unproductive cycle of doing harm to one another because it’s damaging to our progress as a group (tribe, society, species). And in humans that empathy is so strong that even being aware that feeling for one… Read more »

But in the end it means that ZK is lying, when he says he is applying the rule to hypothetical race of automatons. He sees stealing from HUMANS as THE SAME ACT (with the same name for it) as stealing from fellow automatons, so it follows that he sees people as equals as well. People would not arrive to conclusion “stealing honey from bees is morally unacceptable” from applying rules to human race.

Yeah I think, at least to some extent that IS implied. I mean they gradually changed their mindset from exterminating mankind to “only” enslaving them to…well we’ll see.

I don’t think they see humans as truly equal, not by a long shot. But the interactions with Ethan def seem to have quite an impact

Judging from Zeke’s deference to the arguments of these philosophers, I would guess that Zeke acknowledges that humans are inferior, but not in the way that a man is to a bee or a cow. He still enjoys their media, plays their games, listens to their philosophers, agrees with their arguments. It’s more like, when homo sapiens encountered Neanderthals. One is clearly superior, in technology, intellect, capability; the other has large numbers. Two species, capable of thought and reason. You can be xenophobic and say that the one is just like an animal, but realistically it’s very hard not to… Read more »

Oh, I think he still sees his race as superior to humans, but not by such a margin that he would feel fine stealing from them. It’s not like the machines in the Matrix which use us like batteries.

I think the item being missed is that as much as Zeke does not claim to want to be with humans he does, however he does not (perhaps consciously) wish to do so and ends up having to find ways to “Justify” being “humane”

Interesting argument, but I’m not sure it’s strictly true. Most beekeepers perform something of an economic exchange for said honey:

Granted, the bees can’t really negotiate any of this, but the same practices are generally true with all animals that humans harvest from. Even the ones we eat.

Because he is a LOGICAL superior automaton, and knows that his (eventual) children will naturally not consider themselves inferior to anyone, including each other, therefore will also make use of his excuse that “it’s OK to steal from ‘lesser’ beings.

He didn’t, really. That’s why he didn’t consider it a problem until he applied the scenario to his own future robot race.

If we are talking about domesticated honey bees, the relationship is more complicated than simply stealing from another species. Domestic animals get from humans shelter, food and protection from predators, and in exchange we take everything we want from them….
Please don’t give that idea to Zeke!!!

Sounds like maybe he’s just trying to give himself a good excuse / reason as to why he’d align with human morals.

He doesnt’ want to see like he’s adopting it just because someone told him to, or it’s the ‘right’ thing to do (haha!), but oh, there’s complex robot reasoning number #72 to consider, and that’s important as it’s a robot thing, and i guess it just happens to work out for humans too as it makes it not worth my time to do..

Yeah, thanks, that makes sense!

I think the conclusion is “If I’m okay with this, then other robots will think it’s okay to steal…FROM ME. Can’t have that!”

Cheap pun! What a great way to avoid discussing philosophy.

Pay no attention to the downvoting Kants. I like it!

Is this the first time ZK calls Ethan by his name…?

“Rick and Morty” was right! He who controls the pants DOES control the galaxy…

How to shut anarchists up: pants edition.

Well, they were already worth 48 of them.

I believe that any single piece of a pant worn by some celebrity could be use as some kind of currency right now….and a very valuable one.

His largest and very human-like blind spots remain alive and well, I see. Unlike the rest of the arrogant folks, who can only WISH they could separate themselves from humanity… ZK CAN. But if they’re to have a coherent and realistic start for their own society, they should recognise the massive and decisive impact of the human one. After all, they’re a human creation. And thus, bound to share at least some traits. Also, everything significant they do, say, or even THINK will be heavily affected by humanity in one way or another. So, like it or not, whatever framework… Read more »

Seriously? That’s how this debate comes to rest?

I can’t tell if sarcastic or not.

I really like this because it does show the speed of the robot’s thought process.

And now Ethan has to go report this to Lucas so someone can explain what he just accomplished.

Next up, ZK becomes a Trolley operator!

I see what you did there

Come on, you know exactly which track ZK would choose.

Time for some multi-track drifting!

This is why Napoleon was successful for so long. He always tucked his hand into his coat so that he could keep a firm grip on his pants. That way, he could relax about someone trying to steal his pants, and could focus on conquering Europe.

Little-known (i.e. made up) fact: Napoleon was ultimately defeated because his enemies hired a burglar to steal all his pants while he slept. They then told him they hid his pants on Elba, where he spent his “exile” in search of his pants.

Lost the battle due to pantaloonlessness… It has been said that such is one of the most infamous ways of losing, or so they say.

Sounds an awful lot like the old Peabody & Sherman short from Rocky and Bullwinkle where Napoleon’s suspenders were stolen, which resulted in him having to keep one hand on his pants:
https://youtu.be/0Z3G0_dHDAQ

That’s why those comics are so good. You learn stuff.

Miss…mission….accomplished?
This is the definition of succeeding in failure

So what Zeke is saying is that……stealing bad?

I’d say wrong conclusion, ZK. Stealing is plenty ethical should the system put in place offer it as a necessary solution or such a way that it would not matter in the end.

Stealing 48 dollars from Jeff Bezos for example is so negligible he could lose that amount for every letter in this sentence as it’s being read and he’d have hundreds of times more by the time the period is reached.

You’re missing an important part of the equation; even the most negligible theft is only ethical if the goods are then put to proper, noble use. Stealing from billionaires to bling yourself is about as noble as accidentally smothering a baby and half as tragic; use that money to expose the billionaire’s child prostitution empire to the world, now that’s a penny made pretty.

The view I take is that by not paying his taxes he’s stealing from not just me but society at large, the smug shit even trying to first bribe and then sue NASA because his bald head wouldn’t be first in space.

And we can’t have that, now can we?

If a human steals pants from a robot, so the logic goes, then a robot can blow them up because the robot is more important than the human. But if one robot steals from another, what can the victimized robot do but try to steal them back? For if one robot is equal to another (and that’s probably a lot more obvious to robots if mass-produced) then that robot has no more right to pants or anything than any other robot, unless something more important than robots says otherwise. This is the difference between moral absolutism and moral relativism –… Read more »

I’d say you have a poor grasp on Kantian ethics then.

I Kant with this!

Then to Further mudddy the waters, imagine going to all the trouble of stealing the pants only to find out they don’t fit, or worse, are the Brown trousers.

I mean…sometimes it’s the destination that counts and the road you take to get there isn’t as important?

ZK realizes that circular theft to maintain the necessary inventory of pants is inefficient. Instead, enslaving humans to ensure that inventory is sufficient for all automatons is the superior solution.

This did not result in empathy.

I like this line of reasoning, but I think the bigger picture is being missed. Pants are manufactured, sold to wholesalers, eventually to stores, and finally to customers.

The hyper-evolved version of
“Stealing is wrong!”
“Why?”

If I would extrapolate his thought, it would lead him to three possible options. 1. Participate in the economics of man, earning money to obtain things without setting an example of stealing which would lead to his being robbed of his things. 2. Stealing what he wants, and either never producing offspring AI, or aiming to be the best at thieving and keeping from being robbed, system of ethics be damned. This option is hypocritical, so it is unlikely to be his choice. 3. Become entirely self-sufficient, producing everything he needs himself. Ultimately though, this is impossible without tools and… Read more »

This is literally what happened when I was in the Army. Someone would steal a laundry bag or uniform part so that victim would then have to steal someone else’s.

There’s also the aspect that as a new species they’re going to be ostracized by humans, they can claim a lot of defense if they hold the higher moral ground.