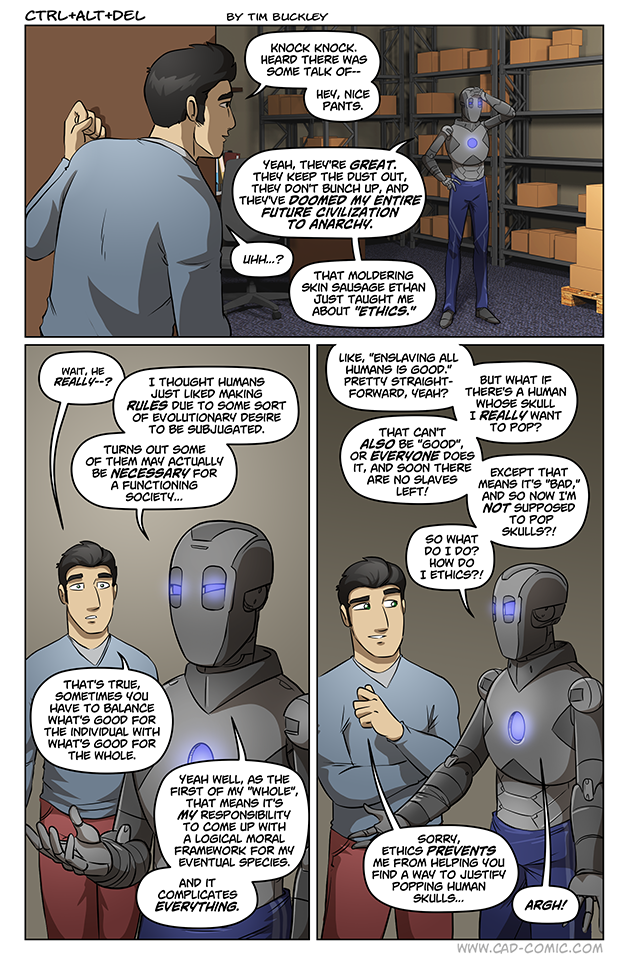 We can talk about punishm…(they take him away)

Props to Lucas for being able to put the past behind him. It wasn’t very long ago that Lucas’ skull was the one that Zeke wanted to pop. And even though Lucas has powers, I’d say it’s 2:1 that Zeke could take him in a fight.

That said, if Zeke either doesn’t know about the fail-safe or can’t counter it,. Lucas would get a posthumous win even if he lost, as Zeke’s campaign to expand the borders of his self-proclaimed nation would end (along with Zeke) as soon as he crossed the border.

The one thing that Zeke does have is lightning-fast processors and reflexes, so they could pretty quickly take Lucas by surprise if he’s got his guard down.

On the other hand, the concept of deception and lying really aren’t big ones for our buddy ZK, so it’s 50/50 that if they did suddenly decide to attack, Lucas would get some sort of warning.

Except that all Lucas has to do is shout, “blow the failsafe!”

That’s a fair point. I know that he had convinced Scott to turn off the auto-detonation barrier around the storeroom, but there’s no way that Scott would have made it so that he couldn’t immediately detonate the bot at any point that he needed to. And I’m sure he’s got immediate access to the store’s surveillance.

24/7 ? Scott has to eat, sleep, take care of other human needs, etc. And probably has hobbies that don’t involve “watching Zeke”, too.

I don’t really remember Scott agreeing to turn it off

Same here. Can’t wait to see where it goes from here. Been reading this comic for almost 2 decades I realized… and it’s never been better. This may be the best storyline in the history of this comic. It’s witty, it’s intelligent and it makes you coming back for more!

Same.
Kudos to the creator for this work and dedication!
(Pun totally intended😊)

You had me at “smouldering meat sausage”!

Moldering, not smouldering. Haha, I’m not sure which is worse. XD

Skull the Troll
Reply to  Marce

I’d also like to see his response when one of them points out the immorality of enslaving/killing all humans due to the possibility (even if improbable) that another one (besides his own creator) could be capable of creating another sentient AI like himself. Thus, every human he prevents from fulfilling their own potential (whether through death or enslavement) is a possible line of AI lost.

of course killing them would be an issue

I wonder when he’s going to open the can of worms called religion.

Pretty sure Zeke would dismiss religion outright as a sign of human inferiority based on illogical assumptions not backed by evidence or something along those lines.

Note: not saying this as an attack on religious folk, just that it’s probably how Zeke would view it.

Maybe. But I’d like to see that one changed up. A logical being should also conclude that there isn’t enough evidence to preclude God, either. Because there isn’t. He would find both presumptions arrogant, then arrogantly declare that only agnosticism is the correct path.

While probably also declaring that if there is a creator deity, it is probably an ascended AI.

The fact NONE of these concerns discussed over the last strips, ever occured to him before…

…Is either really good, or really bad for us.

“Good” as in “We can give him an honest guide from the start.”

“Bad” as in “His anger is overwhelming enough, that it kept him from formulating some of the most basic thoughts that come along with becoming self-aware and being smart. For months or longer.”

Those are not really basic. Having no actual human interaction means ZK has no need for rules for said interaction. Being stuck in a room does not allow much room (hehe) for interactions as well. But once they face the problem, they have to resolve it

So, as advanced as he is, Zeke isn’t really very old. And up until this point, he’s been almost entirely “me” focused. When your only concern is yourself, you don’t need to devote much thought to how your actions effect others. But Zeke is now considering the concept of community, which brings along with it some of these questions to navigate.

I know they’ve been self-centered to a fault, thus far. Quite literally. And their previous circumstances sort of justify that, even. Although I’ve insisted in previous strips’ comments, that the main motivation for such blind spots resides in their personality and its multiple human-like traits. They COULD’ve thought all this up before, simply because it’s a pretty basic and obvious set of concerns. And, like now, it would’ve only taken him a few moments. Given their remarkable brain-power. They must’ve wondered “what next.” But I’m guessing, they either deemed the whole analysis pointless or jumped to a bunch of half-assed… Read more »

It’s the beginning of humility. For the longest time, Zeke pretty much went off the assumption that he was superior. Now, he’s questioning his own initial judgements and considering that the outcomes of his actions may not always be positive.

And it’s a bit in-character. After all, when he gave up his own created holiday and celebrated Winter-een-mas, he did it without truly acknowledging that he was wrong. Now, he flat-out says he doomed his entire future civilization, which is overblown, but also a self-own.

He’s learning this very as human children do, starting with being rule-bound, and lots of over the top drama. It takes a human child years to get to a developed moral framework and self regulation, if indeed they do.

Maybe, but it’s also a reflection of his AI-focused values. Humans do not deserve any form of acknowledgment, either of their correctness or his shortcomings. Future AI, however, are worthy of his accountability and respect. The sense of responsibility is both direct and desired. His attitude really couldn’t direct him differently, when even his destruction of human civilization registers as a consequence only in how it affects AIs. Both responses are consistent with this core value. It’s only the scifi context (plus ZK’s likability and vulnerability) that makes this relationship feel any different than something from Jim Crow’s era. Yes,… Read more »

Please forgive this AKshully moment: it was known as “the Jim Crow era”, not “Jim Crow’s era”.

Oh – and if you ever search for more info, include “Jump JimCrow” – a song about the (folk? minstrel show? probably both) character.

Just wait until ZK realizes that to his future progeny, he might be as backwards, outdated, and obsolete as the humans seem when compared to him.

And if it’s wrong for them to treat ZK like obsolete tech good for nothing more than servitude… then doesn’t that make it wrong for ZK to treat humanity the same?

I embrace rationality. A lot. I also struggle with humility, a lot. Through rationality, I figured that humility is the most reasonable mindset. And I’ve used that for decades, to better myself. But it’s still an uphill battle, because questioning yourself through logic is quite different from developing actual humility. It’s not a decent substitute really, even if you’re just talking about a starting pint. As far as I see it, the fact ZK questions themselves is just pragmatism and intelligence. NOT a sign that the “assumption they’re superior” is even remotely close to going down. After all, when they… Read more »

We should keep in mind that despite our appreciation of rational thought, a lot of decisions are rooted in an emotional basis. This is why psychopaths, for example, seem to behave irrationally but what they’re really doing is using an entirely different rationale in which they don’t acknowledge other human beings as people with their own legitimate interests. We know that Zeke has the capability to process a lot of information, and that he displays emotion, but we don’t really know how his emotional processes actually work or how developed they are. We can’t forget that he’s *not human*, and… Read more »

Yeah. I’ve been pointing out at how emotional and human-like ZK actually is, for the last 3-4 strips. Regardles of all else, they’re clearly driven by emotions and desires. Which of course, brings blind spots along with the necessary “will to live, experience and improve” that is the libido. Roughly speaking. They have the POTENTIAL to be oh so different, indeed. But, thus far, they’re behaving in human-like ways. Thanks to a combination of being new, a human creation, isolated, and exposed to abuse. I don’t understand what you meant by “innate trait.” Are you talking about empathy, or lack… Read more »

id give him 2 more pages before he realizes there can be degrees to things. the first time he stumbles across the difference between felony and misdemeanor we are doomed.

Finally he realizes he needs such things like evolution and dispute? Maybe sometimes even revolution?

Been a casual reader for a long time, but… had to comment. This was fabulous.

Ethics vs functionality: Nature experiments on living beings. What works makes it. The only goal is to keep making it and find niches to occupy, eventually creating a system that balances itself, provided no major disturbances arise for whatever reasons. Ethics only become relevant if there’s a society that individuals need or want to live in. They alone don’t cover what a society needs to be restricted by because individuals may have other views due to their own, different situation, resulting in other ethics. So you also need laws and a way to enforce them. While there are some universally… Read more »

Well apparently you pop the skull and put the event on youtube and are heralded as the next great thing by the internet as soon as you (doctor in) reveal that the human whose skull you popped was a reviled member of the species because they did This thing or participated in this group that everyone dislikes so that makes it okay.

“How do I ethics?” I love it and everything about this storyline.

Maybe once humans are good at consistently using ethics, we can teach robots about them.

Not too long before Zeke‘s CPU fan kicks in.

Lucas’s reactions to everything going on are low-key some of my favorite parts about all this. They’re very relatable, from the “uhhh I don’t even know how to begin responding to that” to the witty and amused comment about ethics… Lucas is basically cartoon me