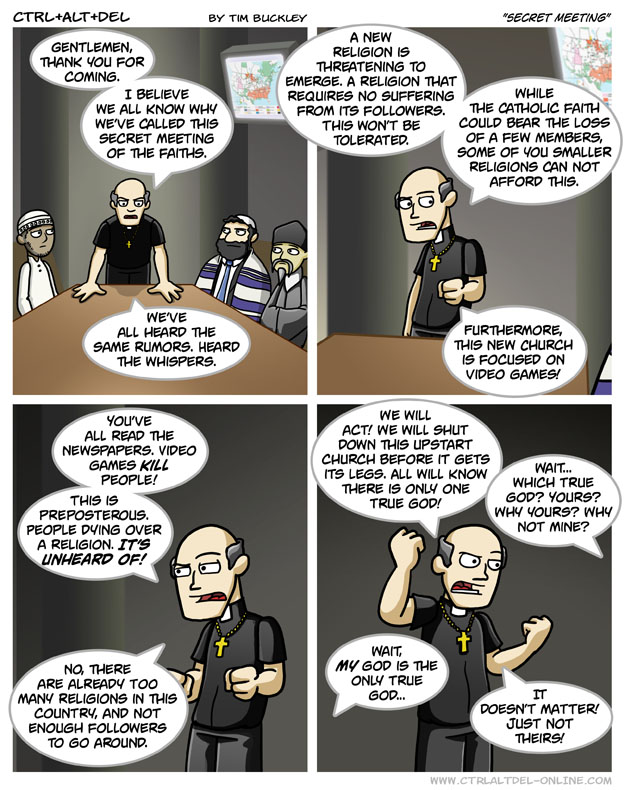 Two of those “religions” have the same God, they just worship him differently. That one has thousands of years of historical record behind him. The third has a god made up in the 600s because the “great prophet” couldn’t get the respect and understanding he wanted from the existing Jews or Christians in the time and place that he was living. So, like the gamer guy, he wrote his own holy book. Studying his life, it’s not hard to believe he was possessed at some point – if not literally, then figuratively, as he and his followers ultimately slashed and… Read more »

Actually, Islam has the same god as Christianity and Judaism. Islam split off from Christianity after Muhammad showed up, with more doctrine that added to the existing.

Let’s not forget about Buddhism and Hinduism

I don’t know that you will ever see this, but in case you do, Islam split from Judaism, just like Christianity. If you read between the lines of Mohammad’s life history you can see that he was interested in Judaism. He even studied it for the required year to convert to Judaism. Once he got to the point, he apparently decided to change Judaism into a format more acceptable to the Arab peoples and wrote his own book.

Cindy your no good

Do some more research. The so called “God” of Islam is actually the “moon god” from the days when they worshipped many so-called gods.

No. Allah is just the islamic word for god and The second last Prophet considering the islam is Jesus. So Islam is as Abrahamic as the other two religions.

Truth be told! Thank you.

Hey, I don’t see my religion at that meeting. Lucifer too busy to show up? >.>