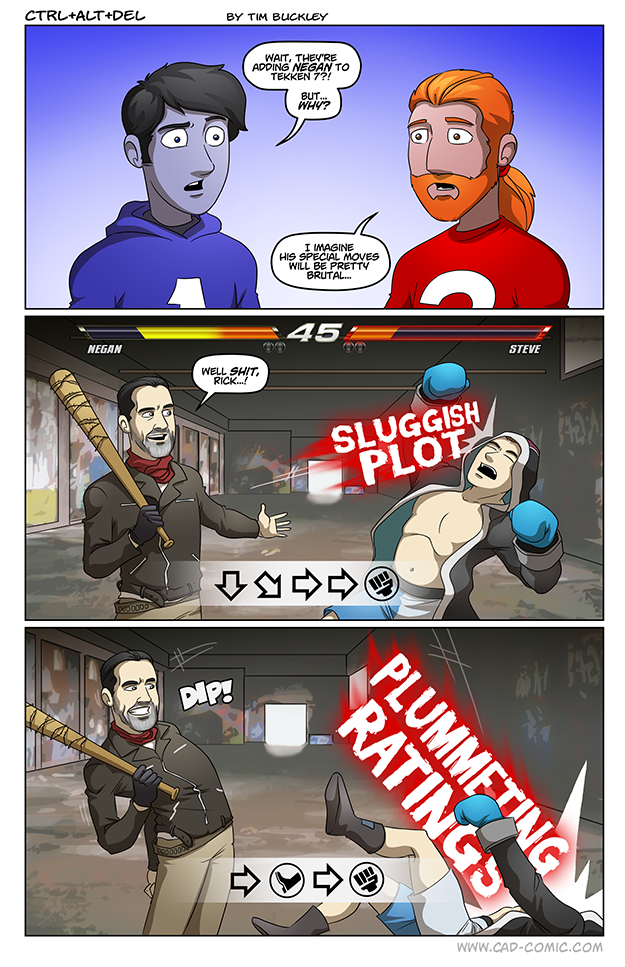 Apparently I will never cease to be amazed by the bizarre crossover characters that show up in fighting games (Yoda and Vader in Soul Calibur, TMNT in Injustice, etc). Every time I think it’s about as incongruous as it can get, they prove me wrong.

Don’t get me wrong, I love Jeffrey Dean Morgan (A Flashpoint movie with him as Thomas Wayne is the DCEU apology Warner bros owes us all) , but TWD has been an insufferable slog the last two seasons since Negan showed up. You can argue that it was headed south before that, but regardless I stick it out with shows (I watched Dexter until that bitter end). Prior to the saviors the show was at least watchable. Now though… Blech.

I’m curious on your thoughts on TWD Tim. I’m not disagreeing with you as far as the last two seasons, which is a shame, because like you I loved how Jeffrey Dean Morgan played Negan. But what do you think caused the show to get so bad, was it the lack of zombies, for too much people interaction? I’ve always liked TWD for how the show was more a portrayal of the group dealing with other people, but the last two seasons seemed to be all about that and as you pointed out, blech. I’ll be very interested to see… Read more »

No, it doesn’t bother me when the zombies take a backseat. That’s always been the whole point of TWD: a story of what humanity becomes in the face of an event like that. I think the big problem for me over the last couple of seasons is that while it focused heavily on a war between factions (okay), it completely stopped focusing on survival elements (not okay). An example would be bullets. Bullets are something that are not being manufactured anymore, and have to be scrounged. They should always be in short supply, especially when the group is staying in… Read more »

Something in the neighborhood of 12 Billion rounds of ammo sold each year just in the US alone…I’m thinking with 90% of the population dead, that leaves a lot of ammo to be grabbed for years to come. 🙂 I have a bigger problem with gasoline, which does go bad…yet Daryl always has gas in the chopper!

Negan was awesome, but the season really dragged….

This season should be interesting if they do the Whisperers right.

I’m not saying its impossible. Just that they can either have ammo, or not have ammo. They made not having ammo, and needing Eugene to craft it for them, a BIG plot element of the season that led to a BIG turning point. But it never felt like they were ACTUALLY short on ammo, and routinely just wasted it spraying at nothing. Yet then EVERY single savior loaded up on Eugene’s rounds like that was their only option, when nothing leading up to it made it seem that way? I’m mostly just using this as an example of how I… Read more »

You know, I think you hit it on the head. I’m really hoping this season turns it around. I’ve been looking forward to it since before the savior’s arrived. You do make an excellent point though, they really did just go crazy with the bullets lately.

I agree that the all out war plot was really slow. If you look at Fear the walking dead, they did a huge war plot in season 3, and the war took only half a season, and way more people died, and the fighting was a lot more tense. Mean while TWD stretched similar events out over 2-3 seasons. Also almost no one(outside random extras) died from the war itself in TWD. A couple of people did die but it wasn’t even due to the combat or anything.

TMNT is a DC product. They make sense, being in Injustice.

What? No it isn’t. TMNT was owned by Mirage for decades and only recently got bought by Nickelodeon. Neither of those are DC.

I think he’s thinking of either Archie comics or IDW. There’s been plenty of comics published featuring the boys under both of those imprints.

I’m curious, Tim, what are your thoughts on Fear The Walking Dead vs The Walking Dead? Do you have a preference, should Morgan have stayed on the parent, is there a post-apocalyptic scenario Alycia Debnam-Carey doesn’t kick ass on (First The 100, now this)?

(Those are just for examples)

FTWD still has me rooting for the zombies. I just don’t really care for any of the main characters. (And yet, for some reason, I keep watching.)

We have not watched FTWD yet.

Well, I’ll say this much for it – it definitely reignited my interest in the show universe after it had started to drag in season four (although to be fair, I don’t really watch TWD now, so…). Give it a shot when you can.

To be fair, the TMNT have something of a standing history with appearing in DC material (two crossovers with Batman I can recall off the top of my head) but yeah, this….this was Xenomorph in MK level wtf

I need to catch up in the Comics, It looks like even the show has past me. I’m not surprised the show has had a hard time keeping things interesting. Its a much different pace from the earlier seasons.

That *dip* move had me LMAO! If there’s one thing that annoyed the crap out of me, it’s how JDM’s spine seem to slightly give out on him from time to time. I suppose he wanted to add some physical move to reinforce his perception of Negan’s nonchalance or whatever, but damn if that didn’t look weird as hell.

I know, it almost got a bit cartoonish after a while, didn’t it?

Never watched TWD, I am the only person in America that does not care for Zombies, TV, movies, or CoD mini games etc. So I cannot speak on that though, but Dexter. The wife and I stuck out that show too just like you said, now I tell people that it is a great show, but you can probably just skip the last season, just quit while you are ahead and go a binge something else.

Nah, you’re not the only one in America who doesn’t care about zombies. They’re fun when contextually relevant, but the only place I found them relevant was in old horror movies where they actually belonged. Tossing zombies into games where they don’t belong as a sort of “survive the horde” mode, that’s just trash. Making yet-another-TV-show or yet-another-movie about zombies just reinforces Hollywood’s incapability of trying new ideas. Haven’t watched TV in nearly 10 years because everything was Game Show This and Zombie that, sprinkled in with UnReality TV shows, and the occasional gem that wasn’t worth the rest of… Read more »

I’ll admit, I loved the walking dead initially. I started to lose interest about halfway through season 3 (or maybe it was 4). I just could stand the ‘were going to make these characters who have proven to have relatively sane and rational thinking and good survival skills suddenly have the decision making capabilities of a coked up ferret snorting a pixie stick because…plot reasons’.

For some reason I find it more okay for that in The 100, but the TWD just ended up irritating me in the end.

TWD is reaching for the Z nation level of bad.

I typically stick shows out till the bitter end too, but TWD lost me. I can’t even bring myself to binge the last couple of seasons.

You can’t really stick it out to the end, because they constantly say it will go on forever and never end(well at least the comic). There is no real end in sight as far as the show goes though.

Power Rangers: Legacy Wars…now with Ryu (& others) from Street Fighter..

To me TWD went from a show i watched, to a show i watched in the background while doing something else. Recently i couldn’t even bring myself to watch it at all, it just felt like season after season of building up to nothing again and again.

Jeffrey Dean Morgan as Thomas Wayne!?!? Oh my gawd, fuck yeah, bro. I would watch the shit out of that. I liked him as Negan, but your comic hits the nail on the head, shit has slowed down and TWD isn’t the fun watch it used to be.

Man, I think this officially makes Star Wars characters in Soul Calibur the second weirdest thing Namco has ever done.

I honestly feel with TWD that the major problem has been the general premise rather than the individual seasonal situations. I mean I love a good zombie story, I really do. But the problem with making it into a TV series is that it eventually just feels like a zombie movie that’s gone on for far too long. They’ve covered all of the major high notes of a zombie apocalypse story. First stage being the initial frenzy where people struggle to come to terms with the fact that the dead are coming back to life and consuming the living. Second… Read more »

… As a side note, I wonder exactly what Negan would do with the Soul Edge