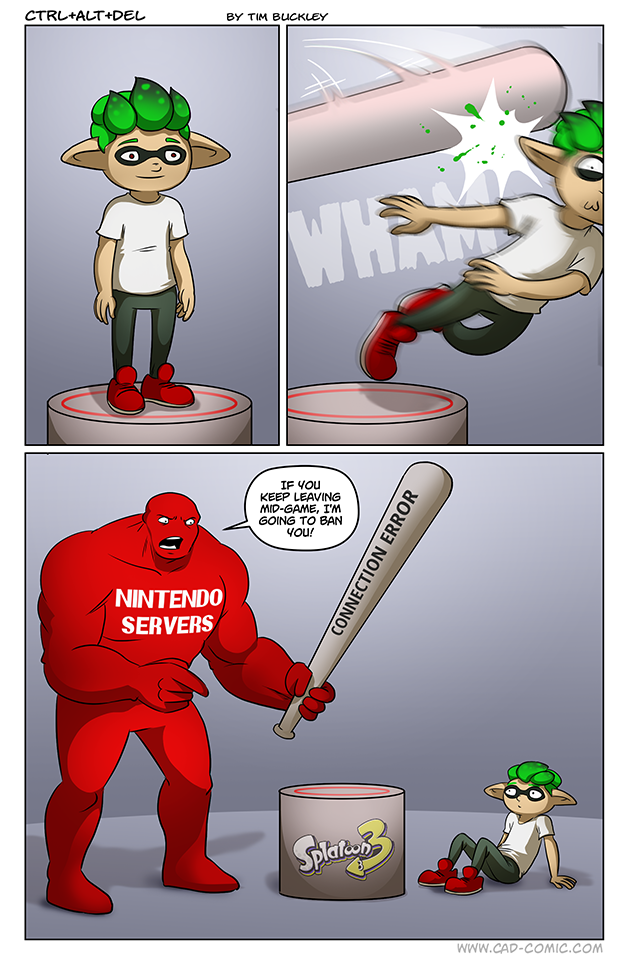 Splatoon 3 is a blast. When you can actually play a match.

It seems not even Nintendo was prepared for the massive success of the game, because I’d say one out of every three online matches I play ends early due to a disconnected player.

Connection errors are running rampant, and while that’s not unheard of in a wildly popular online game its first week, what’s (not so) amusing is that Nintendo’s system views this as rage-quitting a match. I’ve not gotten a ban yet, but the system has started warning me of the consequences if I keep leaving the matches (that it kicks me out of). I’ve heard of others actually getting 10, 30, even 60min bans from the game for the disconnects.

It *is* a blast. I’ve already put far more hours in this one than I ever did the first two.

Having a proper lobby system where you can team up with friends actually helps.

Also rather than a waiting room, you get a shooting range. This is especially helpful in Salmon Run where the weapons are modified, and it’s important to know things like “does this one-shot a chum” and “how many shots does it take to kill a cohock or a steelhead?”

Honestly, yes. And not just that, but being able to practice moves and get a feel for different approaches, maneuvers, aim, etc. without pressure of a match.

I wish there were more maps, but this is Splatoon; half the content comes after launch.

I wouldn’t have a problem with that (and never complained about that in Spaltoon 1) if the online was free. The moment you pay for an online service, that sort of frequent connection errors are simply unacceptable.

To be fair: this is an issue with Splatoon 3 itself, and not indicative of the online service. I never have had connection issues with any of the other games I play online; Smash, Splatoon 2, MK8, or even any third party games like Dark Souls or Fall Guys.

Splatoon 1 never had issues like this. This is maybe dropping 4 or 5 matches per hour. Sometimes mid-match. This isn’t an acceptable issue, even if it *was* free online. Splatoon 3 is a $60 game that is 90% online multiplayer.

And remember: Nintendo expects you to pay them $20 every year for this.

Nintendo fans are some of the most vociferously outspoken in the industry. You’re literally commenting on a comic that IS A FAN COMPLAINING.

Also, I hate to be THAT person, but… punctuation. Punctuation is good.

The console wars never died.
Twice I’ve made a comment saying that while I prefer the SNES, I can list the things that the Megadrive/Genesis did better. Then I get called both a Nintendo fanboy and a Sega fanboy by people who outright reject everything I said.

They even go so far as to say that everything I said was purely subjective, and that I shouldn’t list such things as facts.
I mean seriously, the things I’m saying are stuff like the SNES displays more colours, how on earth is that not an objective fact?

Have you ever sat in a room with a bunch of Nam vets? They will talk about the war in detail – where they served, who they served under, what they did, decisions that were made, things they were frustrated with. In great, vivid detail, as if it was still happening. But the Vietnam War ended almost fifty years ago. To us veterans of console wars gone by, the scars are still there. They never go away. And it doesn’t take much to bring them to the surface. Even though we’ve since made peace with the other side, invited them… Read more »

lots of fan complain tho, you’re full of shit

Nintendo has always had garbage online services. I love Nintendo games but cannot justify a game if its multiplayer is online only and doesn’t have couch coop. And sadly I don’t get to play much of that either. So my switch gets used less and less.

Erik B
Reply to  Canis Dirus

We basically refuse to get any game that can’t do online couch co-op, since my wife and I like to play with our other couple friends, or sometimes even more people. If we can’t play 2 of us on one system, 2 on another system, we don’t play it. Smash bros is reserved for when they visit us, because we can’t play all 4 of us in one match, and one on ones suck.

In the early days of League of Legends, I got banned for a day or two for “leaving” and “queue dodging.” The Season 1 patch was utterly broken that matches wouldn’t start after the players finished selecting their champions. And if you could get a match, often half the players could get disconnected at any time and then get stuck in the login queue, unable to re-join the game.

personally I haven’t had a disconnect on splatoon 3 even during hand handle mode during my lunch breaks at work.Seen afew teammates/enemy dc but nothing abnormal high.
now splatoon 2 was a dc fest, couldn’t even last Amin in hhm with that one.
The only thing I wish is to have the options of switching weapons during a match. Kinda annoying to have one entire team of rollers vs a more balanced team

My experience and observations have been that Nintendo is bad at online anything. Online gaming servers, connecting to friends online, their online store, what online things you can do with and without their subscription service.

I’ve had almost no problems with connection issues *except* when my wifi connection is bad, which is actually a Switch hardware issue. This can usually be solved by resetting (actually powering off) the Switch. Case in point: I have three switches in my household playing Splatoon 3 at the same time, but one time one of them kept disconnecting, 3 matches in a row, while the other two were fine. A reset later and that Switch hasn’t had a connection error since.

Reminds me of when i was playing Elden Ring, and I kept on getting disconnected while being invaded. The game, in its infinite wisdom, decided that i was ragequitting and banned me from online play unless i played 10 hours offline. Ridiculous.

Thanks for using the Rick and Morty mouth on the second panel. ♥
It’s my favorite cartoon mouth expression I’ve seen as an adult.

Oh so it’s not just my chronically spotty internet to blame? Thank goodness, I’ve been basically unable to play at all outside the single player campaign

my buddy had this issue with overwatch long ago. his pc was having heating issues and was causing the game to crash from time to time. funnily enough only when we were winning lol. the fact we could only play one or two matchs a day in competitive really made us just give up on it. cant get out of the shithole that is bronze if you only do a couple matches a day.

oh i forgot there was an online mode. I’ve been having fun doing the campaign.

After the length of time we’ve had servers for games, you’d think that they’d have scalable architecture and they’d have dealt with someone (or setup themselves) an ability to scale out the number of servers during high load periods (like at launch, but also if it gets popular later). That’s something businesses (and not just the Googles of the world) have been doing now for years and years and some without a massive expense. If the failure is software that gets glitchy at high load conditions, what in the name of electrons did they do for testing? We’ve also known… Read more »

Review bombs and rage refunds is more likely the case.

I absolutely dont get the hype but I’m happy everytime I see a nintendo game being popular, especially in online multiplayer

Penalties for server issues kinda reminds me of one time with GTAO I logged in to get one of the little 150k or so log in incentives, only for the game to then kick me and upon reconnection I got a message saying the 150k was taken away because it was considered illegit.

“Supposedly there’s a patch incoming soon.” It doesn’t even matter if it’s the servers or not. The core issue is that they make an assumption for something they can’t know but only guess. Devs should be more competent than that and that’d mean no penalties but creating play groups for players of similar connectivity, which should always work, whether it’s the players themselves or their servers. It’d be infuriating to be called guilty for something I’m not AND getting punished for that as well when knowing full well that it’s not my fault and I can’t do anything about it.… Read more »

In Splatoon 2, the only punishment was a 5 minute cooldown before you can play again. There is no ban system in place for Splatoon. The only way you can get banned is if you cheat with modded software, and that basically just removes all online services for your entire system.
I mean it’s still technically a kids game, so they don’t want to punish people too much for small mistakes they may make.
It also got 3.5 million purchases in 3 days. That’s definitely something they didn’t anticipate.

I’ve never actually had many problems with server connection, other than the occasional disconnect, though I suspect most of those are just my own internet being weird. Guess I just got lucky with the servers, considering I’m not even in the US.

Can barely play a match every 3 or 5 Disconnection error.

Banning players is one way to handle the load of too many players. Sounds like the problem will fix itself shortly 🙂

Banning for getting disconnected is stupid as hell. Putting a 5-10 minute delay for deliberately quitting through the menu should be the only penalty.