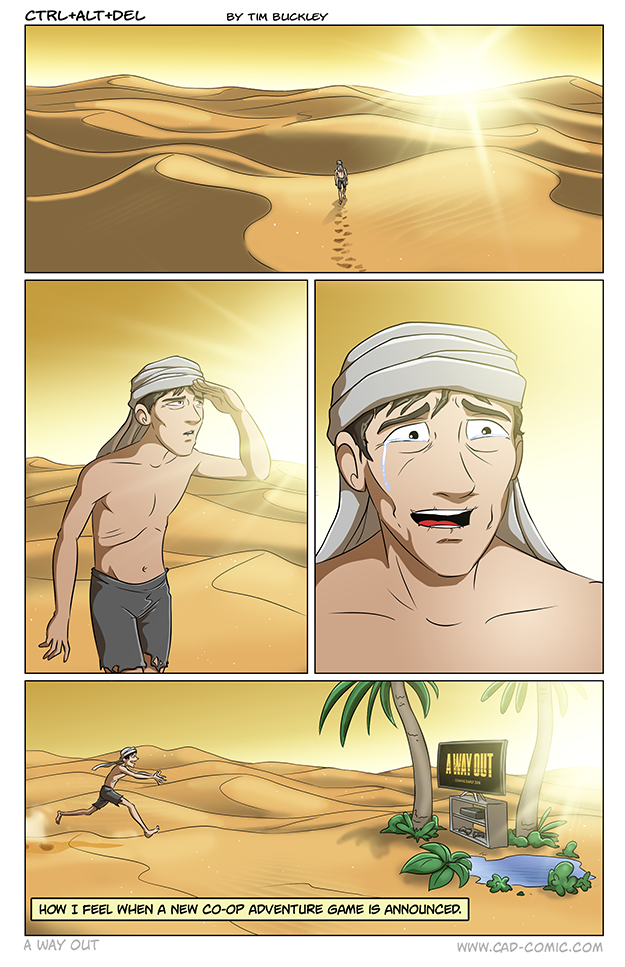 Legendary Showdown: Presidential Edition has reached its funding goal! The campaign has a couple of days left, so there’s still some time for you to score a copy, and help them hit some stretch goals!

So… E3 has just begun, and I’m sure we’re going to be seeing a lot of cool stuff this week, but oh man I feel like, at least for me, it’s going to be pretty hard to top A Way Out.

Don’t get me wrong, I’m psyched to hopefully see life for the Nintendo Switch beyond Splatoon 2 and Monster Hunter, and the new Destiny– wait, I mean Anthem– that Bioware is working on looks pretty slick, too. And there will be plenty more, I’m sure. But unless any of them are co-op story games, my heart may be spoken for.

I never feel like we get enough co-op adventure games. Most often it seems the best we can hope for is a tacked-on secondary character that can join the primary protagonist on their hero’s journey. A character for the second player to control, to participate in all of the gameplay, yet none of the cut-scenes. They are a shadow, faceless and voiceless. It is seemingly the least amount of effort a developer can invest in co-op, and yet even that much is rare.

Even better, but less often, we get a game that is designed to be co-op friendly. Army of Two, Kane and Lynch, Divinity: Original Sin all spring to mind as titles that allow a second player to join and actually be a part of the story. To play characters with agency. The game can be played alone of course, with the AI controlling the other character, but if you bring in a friend they are allowed to become as invested in the adventure as you are,

And the rarest beast of all, is the game that commits wholeheartedly to the co-op concept. That says, unabashedly, “Bring a friend or begone.” And those games have the chance to be something really special, because in not trying to please everyone, they can explore elements of gameplay, communication and cooperation that we don’t often get to see in other games.

There are moments in games that stay with us for years. Experiences that we have, and they can come from all sorts of games, be it an amazing shot you made in multiplayer, a crazy glitch that had you laughing or ass off, the first time you completed a favorite game, or what have you. Moments that, for one reason or another, stand out among all the other moments.

A lot of mine are from co-op games. Playing and experiencing alongside a friend. One of my favorites is from the Kane and Lynch games, actually. Now, you can say what you will about those games, they had some flaws, and they were embroiled in some controversy for sure, but they were a solid co-op title and sometimes you take what you can get.

Anyway, my best friend and I were playing through the campaign, in the living room but on separate televisions. At one point we were escaping from some thing we did (the details are hazy at this point), we’re making our way through some crowded streets, and suddenly I look over and my buddy (he’s playing as Lynch) is just blowing away civilians left and right. Just brutally gunning down people in the street.

I yell at him, like “What the fuck are you doing?!” because obviously he’s going to bring the law down on us, and he replies “The cops! They’re all over me!”

I say nothing for a minute as I watch him continue to gun down civilians, and that’s when it dawns on me: on his screen, he sees these civilians as police officers. Because Lynch, the character he’s playing, is mentally unstable. I was floored.

I know why we don’t get more co-op adventure games, from a business standpoint. Developers want wide appeal, they want replayability, and they want flexibility. And that’s easier to obtain when the concept of co-op is limited to drop-in, drop-out, parallel play that doesn’t require much investment.

If you start a co-op story with someone, you’re making more of a commitment, because if your partner bails, it can be harder to find someone else who is ready to step in at the exact same moment in the story you left off on. And for gamers without someone they can rely on to partner with, and who may not want to make that commitment with a match-made stranger, co-op becomes too frustrating and untenable.

So yeah, I can fathom all the reasons why we don’t see more co-op adventures. But that doesn’t stop me wishing for them. Or from getting really damned excited when they do pop up.

This sounds promising. I hope it will be as awesome as Army of Two and not as annoying as that brother carriage boredom.

But coop emphasises teamwork, which did not work in some games. Like assassin’s creed. Let’s hope that there won’t be changes or broken promises like in that embarrassment we must not speak about.

Right, sometimes it doesn’t work. Like when they tack it on to an existing game not originally designed with it in mind.

Did you point out to your friend that he was “hallucinating”? How did he react?

I think it messed with him a bit more because it was like that moment when you realize you might be crazy, and can’t trust anything you see. XD

alas, it was but a mirage

And as the weary wayward wanderer finally reached his destination, he found that his map was upside down, and all his progress had been for naught, as his goal lay in the Southern Plains, not the Northern Tundra.
But dismay he did not feel as he put together his exploration crew, refilled his supplies and made haste, lest another claim his true prize.
– When I decide to try writing a momentary short story about doing a quest thing and then realizing you looked in the wrong place

when you mess up between a place called Southern Plains and another named Northern Tundra and you end up wandering a desert, you know you can’t read a map for shit XD

Based on a possibly true story.
Or when you go to “Buried Ruins” but it’s actually a mountain cliff 1280 feet in the air.

I agree with this so much. I love co-op games but I know they are hard to develop and are not as popular as other modes.

Yeah, unfortunately a co-op game with a story, you’re naturally going to want to play through it with the same person(s) start to finish. That means not only finding those people and committing to play together, but then also not playing your shiny new game unless they are also available to play. That can be a tough sell for a lot of gamers, but they’re some of my favorite experiences.

Agreed. Luckily, my fiancee loves to play with me so I always have a person that is readily available. I’ve played a lot of coop games, but do you have suggestions on your favorites?

Mario!
Oh wait, you meant FAVORITE not most likely to tear your family apart.
Spelunky is a platformer that is co op and a lot of fun. Finding out all the intricacies of the mechanics is actually incredibly enjoyable. Like how you can use a ghost to push a shopkeeper off the side of the cave, then loot his stuff and when he goes crazy he’s 30 tiles below.

Maybe that’s an obvious answer, but Portal 2 co-op is just genius. You can also find some great fan-made maps, single and coop.

Doesn’t the guy pictured in the comic have a slight problem with the whole Co-op game concept, seeing as he’s alone?

I mean it seems as though he represents me 😐

It’s okay, you are never more than a couple thousand miles from the nearest human.
It’s just a tin can’s descendant’s display. And copper. And iron. And silicon. It (presumably) can’t have feelings.

Not necessarily, you can play the game with a friend online…

… because clearly he has an internet connection in that oasis

Well…
There could be a router next to the oasis that you can’t see.

and electricity, while we’re at it XD

Idk. I’m still boycotting EA. I’m not sure if this will be enough to get me back in. I really don’t want to install origin. Maybe if my friends could dedicate more time to play co-ops with me but they’re too busy with “school” and “degrees” and “studying for tests” bah…

I get it. EA has certainly done enough to warrant the hate they receive, and they make a lot of bullshit decisions.

With that said, though, I try to cut some slack for independent studios that publish through EA. I don’t believe EA can exert QUITE as much control over the studio when they don’t own them outright, and their level of involvement will depend on the terms of the publishing contract (and whether EA is financing the game).

What I worry about most in this arrangement is if A Way Out does really well and EA decides to snap up the developers. And then kills them a few years later.

Hopefully then EA will become a Snapping Turtle and move very slowly, and then will not release as many of the bad games it releases yearly.

Eh. I’d keep walking until I find an oasis with a couch.

On a more serious note, this game DOES look pretty awesome. I liked the concept of a co-op jailbreak when I saw it with The Escapists 2, and I like it here. I’m the kind of person who thinks that graphics don’t matter so much as long as the game is well executed, so we’ll see which I get.

I don’t care about the Oasis, just the game 😉
Because it will give me…A Way Out!!!
*lame meme*

I love the idea of co-op games… unfortunately, I don’t have any friends that I can play couch co-op with and most of my friends online are either in a completely different time zone or just can’t find a time to meet up.

I really had a lot of fun playing Borderlands 2 with two RL friends, but then they moved to PS4 while I stayed on Xbox. 🙁

…
I play PS3, 3ds, Wii, GBA, DS, Origin, and other things because that’s just what I can see looking around.

And I’m the guy who reads this thinking, man, I wish I had a friend to play it with.

Hello, mister Buckley, this is ZSphereMaster.
“A way out” going out to the Nintendo Switch. Look’s promising…

Anyone else suddenly getting login prompts for http://www.killerrobotgames.com? I smell an ad virus. Just to be safe, I’m blocking the entire domain.

KRG is the company producing the card game I drew art for. If you’re getting a login prompt, it may be a weird result of the ad for the Kickstarter above, which is the only thing on this page pointing to their url.

However it’s been there a month now, and this is the only time anyone has mentioned anything like this.

Just started today. Whenever I load the page, there’s a native browser login prompt for it. Like this: http://blog.stevensanderson.com/wp-content/uploads/2008/08/image1.png

The KS is over in a few hours, and then I’ll be removing that ad from the page anyway.

It probably was because of effectively misclicking it.