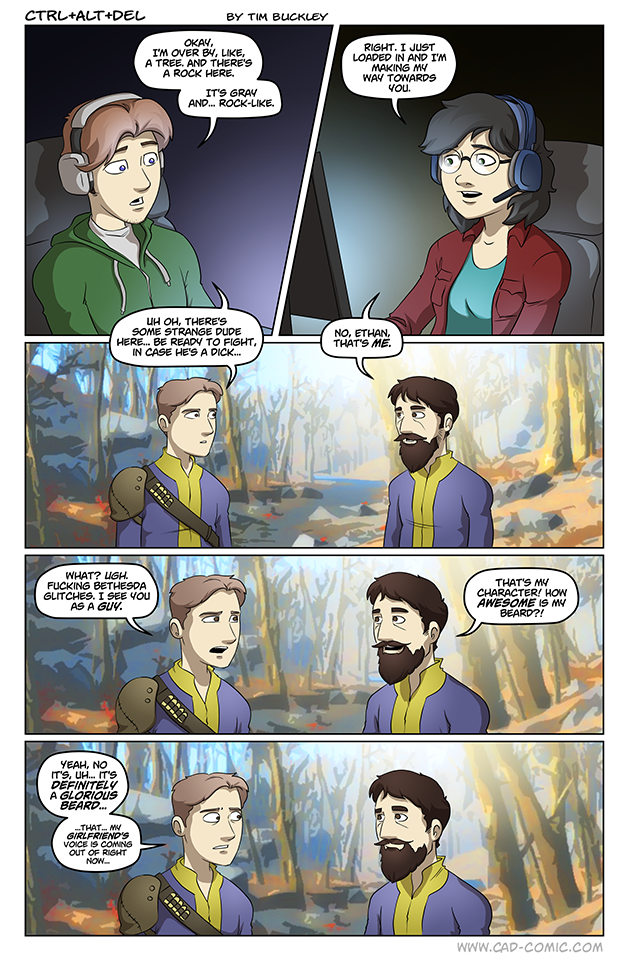 Just a heads up so you can, you know, mark your calendars or whatever, but word is we’re going to be launching the new Ctrl+Alt+Del store on Monday November 19th. We’ll have a bunch of brand new shirt designs which is something I haven’t been doing a lot of for the past, oh, six years or so. If you follow me on Twitter, you may have seen some of them. We’ll have a design for Winter-een-mas 2019, as well as pre-orders for the first-ever Ctrl+Alt+Del collectable enamel pins, which hopefully you guys like.

To top it all off, we’ll be launching on the first day of a Black Friday sale, so you’ll be able to shave a cool 15% off to boot. So yeah, that’s a thing we’re doing next week. Don’t worry, I’ll remind you.

RE: Fallout 76… yeah. I’m not doing it. I thought I’d do it, I wanted to do it, but got right up to launch day and couldn’t pull the trigger. Kept hoping to see a thing, anything, that made me feel like the concept was going to gel and come together, but… nope.

Don’t get me wrong, I was on board with the idea of online survival in the Fallout universe. I love that they wanted to try something new with the franchise for this one.  But the game’s still gotta be good and what I’ve seen just… isn’t. I dunno, maybe it will improve over the next few months, but right now it just kind of looks like butt. And I’m not going to put down RDR2 and Hitman 2 to spend time with a game I’m not psyched about.

ahaha that has to be super disturbing

False. If Ethan was playing a female character, his boobies would be bigger than her beard.

Protip: not all males have beards

True. Some males are children.

Of course, I do grant exceptions for those whose uniformed standard requires clean shaven, and those who have suffered injury preventing growth

I’m on board with you sir. I was excited when it first came out, fallout MMO/multiplayer game. Then the more I learned about it the less excited I became and realized it was just another Minecraft, rust, 7 days to die game. I figure I’ll skip it. Hopefully fallout 5 will offer coop

Technically you’re half right. Its Rust, but without the procedurally generated map or obligatory PvP outside of modded PvE only servers and with leveled weapons just….everywhere instead of having to be mostly crafted by you…. and its Fallout, but without the generally good story, NPCs, skills, interesting decision making, player choice, Wasteland aspect since it takes place in a surprisingly well-forested area even though this entry takes place the soonest after the bombs dropped, none of the lore since this technically takes place before any of the already established games even though it heavily references that lore, or apparently even… Read more »

Ethan has a free “crazy pass” for as long as he is playing ’76.
Just a decade or so ago Ethan would have a psychotic break after hearing “Fallout”, and now he’s playing the game consciously and in a presumably non-delirious state of mind!

That was a different Universe. The Ethan in this Universe is much more stable.

Stable and yet somehow worse.

Here’s my reason for not wanting to play Fallout 76. I’m not a fan of MMO type games. I’ve tried several in the past, but each one’s been a let-down to me. To this day, the most fun I’ve had in gaming was a co-op session of Saints Row 3 with one of my Steam friends. We had voice chat on, and got 3/4 of the way through the game before he got bored with it. (To be fair, it was my second time through, and his sixth. I was having fun, he was going through the motions and occasionally… Read more »

Honestly, Fallout 76 is not an MMO it is much more about friends hanging out together than it is about strangers. There are so few people on the server that honestly I rarely see strangers and generally it is just me doing my own thing, and that is despite the fact that it just started up and we are all doing the same noob quests. That being said, I don’t recommend the game, but not because of the MMO aspect but because of the game aspect. The game is freaking empty. I know there is a lot of content out… Read more »

And can’t wait to get my copy in the mail today and get it booted up.

I JUST started Chapter 4 last night with RDR2, and I play it like 6+ hours each day since release (still accidently shooting people when I want to talk to them).

AND I Have the Gold edition of HITMAN 2 all loaded on the ol’ PS4 and….yep haven’t even started yet cause of RDR2.

Fallout 76…Never even interested me remotely BECAUSE it’s multiplayer.

Jacob
Reply to  Daniel the NeonKnight

It took me a dozen reads to not read that as a Star Wars reference R2D2.

This probably isn’t the best place for this comment, but does anyone else have it happen where they report an ad and the ad reporting system just says “posting” indefinitely? I’m wondering if my ad reports ever go through.

Him.
Reply to  Pat

Sometimes things get stuck, including comments.

I remember reading somewhere that 76 is not to be considered an iteration of the core franchise, but more of a spinoff, like ESO. So I don’t mind the MMO aspect to it. I’m more interested in the story arch of the infantile wasteland. I like seeing the unspoken lore get built up, even if it’s lost in mutant sloths and pvp conversations.

Hahaha, well most players have done this. Granted, I think any ingame couple sex would be REALLY weird under these conditions.