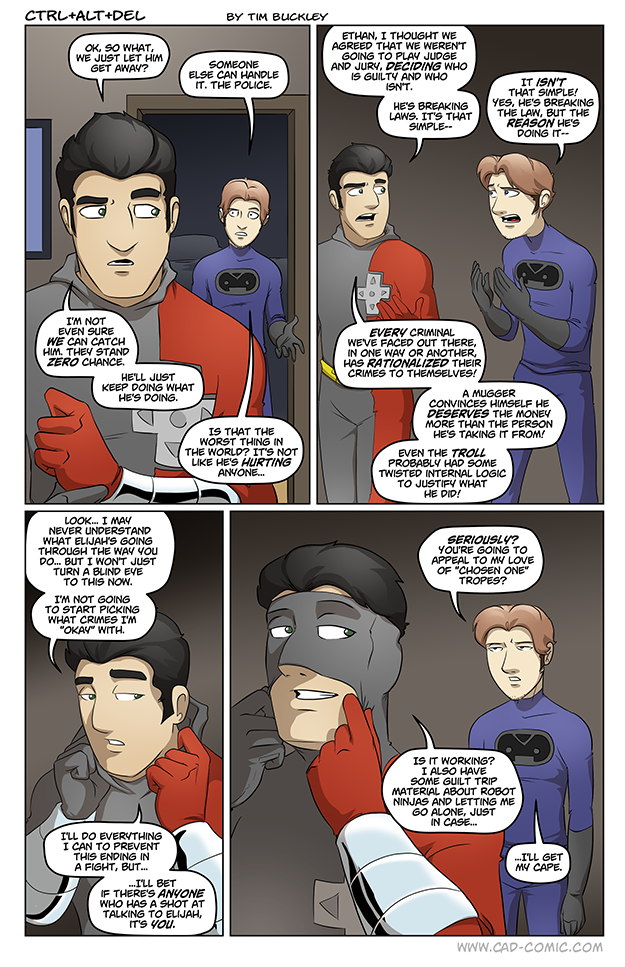 The books we had in the US are gone! Sold out! Forever! Thank you to everyone who bought one, and sincerest apologies to those whose orders I had to refund; our system oversold a handful of books before we could catch the error.

We do still have the digital copies of the book on disc, though. The digital copies on disc are the high-resolution files the printer used to create the books, and higher resolution that the versions you download (for file size reasons). The disc set also includes both seasons of the old Ctrl+Alt+Del Animated Series and a bunch of extra digital content, which the downloadable versions do not have!

Additionally, if you live in Australia, the handful of sets we have sitting at a warehouse there are also discounted! You can purchase one of those using the button below! THESE BOOKS ONLY SHIP TO AUSTRALIAN ADDRESSES.

Nevermind, I don’t think the Australians want these books. I’m going to keep looking into a move to the EU. I’d need enough EU customers willing to order the book up front to make it worth it though. I’m putting together a price, and as long as it’s cheaper than it would have been to order a book from the US, I will pitch it and see what kind of response we get.

Just for the sake of clarification, and the fact that I’m getting older and have a horrible memory, is vigilantism legal in Analog and D-Pad world? Or is it just tacitly accepted, Jim Gordon style?

Because if not, then they’re also “breaking the law, it’s that simple”.

I’m guessing accepted, since Captain Prime seems to be a celebrity hero.

Lilah: “The vigilante laws afford you no compensation, barely any protection.”

So there does seem to be SOME law covering it, though we don’t know what it is, and some of the super-powered folks seem to be implied to be working more directly with law enforcement.

Ah, right, like I said, I have a horrible memory, lol. Thanks 😉

Him.
Reply to  Jakk Frost

It’s legal, but there are many circumstances that will probably be treated as crimes, even if they should not be.
The vigilante crimes probably just cover basic assault and certain legal issues pertaining to the super POWERS themselves.

The Schaef
Reply to  Him.

Does it cover dropping people off roofs?

A Wild Gamer in his Natural Habitat
Reply to  The Schaef

I’m guessing since there isn’t a super-powered manhunt looking for Ethan…. Yeah.

I’m guessing accepted, since Captain Prime seems to be a celebrity hero.

Cool. All our attentions are belong to youse now.
Hey,wondering if we can submit ideas to our great and mighty Tim, or if the plots already foolproof?
If it’s asked before let me know.

Reminds me of an idea that had been voiced during the Starcaster story….but it maybe related to the polls and the consequences of their results….

Crime in this city must be fairly nonexistent, if two superheroes can devote any time at all to a tagger.

Probably not focused on the small time crime that police can handle.

From what can be gathered from the comic major crime is often handled by government backed heroes known as the Captains. Its probably a population thing. Your city gets big enough it gets its own well trained government funded hero, maybe more than one as it gets larger. They take care of a lot of the ‘big’ crime such as super villains and anything that would land you on the news.

What they don’t have time to handle falls to police and non-government supported heroes.

Well, they got Captain Prime for the “real crimes” as they got the police for the normal crimes. So that leaves only the “annoying crimes” for our hobby heroes to solve.

I know they’re not the avengers, but there should be bigger crimes than being a graffiti artist – specially a GOOD graffiti artist. Plus, their quarry’s brown skinned – they should know the police won’t be exactly fair with him.

They only really got involved because it was their store that was tagged, and now they are only continuing because they are not just going to walk away because they understand.

Besides, they really do need to talk some sense into Elijah so he can do some actual good with his powers rather than just tagging stores.

I mean, they live in a world with superheroes… can’t it be a world where racism isn’t so pervasive too? :'(

I have to say, I was kind of sceptical about the whole rehaul of CAD-story at first. I really loved the sillyness of the original from page 1 onwards.

Now I have to say how wrong I was. This new era has still kept the sillyness and even surpassed it at some points, and the depth of the story and rewamped characters is nice. Specially how the characters are alot more relatable compared to the previous story.

Keep up the great work Tim!
*greetings from Finland*

A crime? It´s barely a misdemeanor. I mean, I would argue that the heroes would do more good volunteering at a soup kitchen. I´m guessing Elijah will do something bad that justifies him being a villain. But for now, it just seems like a waste of time more than anything else.

Him.
Reply to  Fredrik

Lucas said that Ethan should talk to Elijah, not beat him to a pulp. I think Lucas is worried that he’ll do something worse, and is seeing a second, less aggressive confrontation to be a good choice. Because, you know, Elijah doesn’t see them as a threat and didn’t run off, so they should be able to talk to him.
Maybe.

The rAt
Reply to  Him.

Oh sure, it’s no big deal. He’s not really hurting anyone… right up until he graffitis Ethan’s beloved Uncle Bob. Only then will they realize the truth:

NNextremNN
Reply to  The rAt

“video-game-related responsibilities” … looking at my sims graveyard, a dead tamagotchi and all the family relatives who had to die so I could go on an fun adventure for revenge doing a lot of pointless totally unrelated sidequests …

I actually expect Elijah to put his powers to better use rather than becoming a proper super villain. I mean it will be a lot harder for him to be a super villain with them already knowing his identity (though not impossible), and it will be an even harder turn when I expect Ethan will talk to him as Ethan and not Analog in this coming.

Bad Lucas bad!
This really isn’t the right path. I mean, Elijah’s a freaking graffiti artist. Not even a high-class pickpocket.

Wait, read that a bit more closely and Lucas seems to want to talk to Elijah more than fight him.
I stand corrected

Meh. Honestly it would have been better if they had shown Elijah becoming more violent in his methods other then just tagging and them wanting to keep him from going to far. As it is this just seems a bit pedantic.

Man of the West
Reply to  Critic

True, but sometimes heroes don’t need to pulverize a guy and put him in jail. Sometimes being a hero means helping a person heal before that person gets to a point in their pain where they would cause real damage.

NNextremNN
Reply to  Man of the West

This reminds me of a deadpool comic: https://imgur.com/gallery/2eKh1

It will be pretty interesting seeing Ethan talk a criminal out of crime. Amazingly, I actually think he can pull it off in this case.

Oh Lucas. About those studies. If your kid is playing video games, don’t stop him. A recent study conducted by Oxford University suggests that young people’s development improves if they play video games each day, as long as it’s not too much. A study that engulfed 5000 British children from the ages of 10 to 15 revealed that 75% of them play video games regularly, and from the questions about certain social factors the conclusion of the benefits of video games were reached. The study claims that those playing video games on a regular basis are more satisfied with their… Read more »

Przybylski XD
Etymology aside, that seems fairly accurate. I’ve seen plenty of kids who were too shy to interact with their classmates make friends because they started talking about games. While an excessive amount is obviously harmful, playing games isn’t inherently bad and in most cases is good.

Wow. We should tell Lucas and Ethan that it is 2018 already: protest grafitti is an important part of our culture and politics. Also, there might be unfair laws.

Enjoying the comics! Hope Lucas gets a bit less Lawful though

Did somebody say my name?

Man I wish this kind of discussion and people talking to each other happened on every CAD comic strip. This deserves to reach more people

As one of the ones who got a refund instead of the books I am extremely disappointed. I know I waited too long but this was the perfect storm for me. I had money, you had what I wanted when I could afford it. If you hunt up another cooy count me in.

Ugh Don, I’m sorry 🙁 I felt awful having to cancel orders. There was a discrepency between the inventory I had in my system, and what we actually had in the store. I assume from replacing some sets that got damaged in transit.