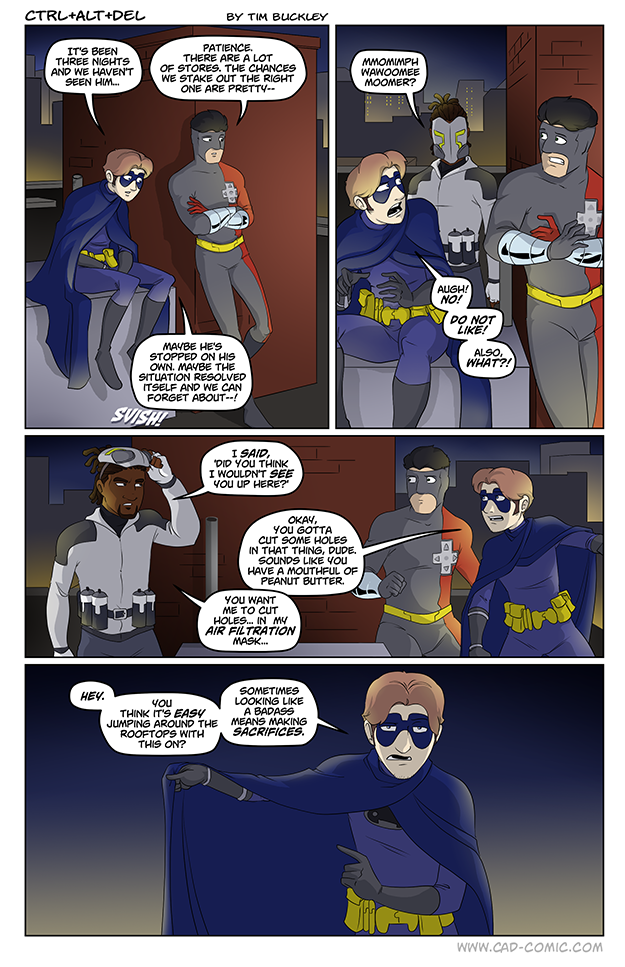 Ok, we are officially sold out of CAD 1.0 Box Sets in North America! Thank you to everyone who picked one up, and again, I am incredibly sorry if you ordered one only to have your order canceled. We oversold some copies that we simply did not have stock for, due to a discrepency between what I thought we had and what the warehouse actually had.

We do still have the digital PDFs of the book set on disc available. These files are the highest resolution possible (the same ones I sent to the printer to print the books), and are higher resolution than the digital download versions (for file size reasons). And at the moment, you can actually pick up the disc set (which also includes both seasons of the animated series) for less than digitally downloading them!

And that just leaves, 35 unsold copies of the Box Set left in the world. And they happen to reside in Australia, but apparently every Australian that wants one, has one. I had promised to look into moving these books to Europe, for customers there that might want them, and for a moment it looked… unlikely. But I crunched the numbers, and if there was enough interest, I could freight these remaining sets to Germany for distribution for $120 per set. That is for the books, delivered, anywhere in Europe that is not Russia, Turkey or Israel. It’s not as cheap as I’d hoped, but it is less than the $180+ it would have cost to ship one from the US.

However, I can only do this if I know these books have homes. Meaning enough people willing to commit (pre-order) them before they make their journey. I don’t want to take any money until I’m relatively sure I have the interest, so to that effect: If you live in Europe (except Russia Turkey or Israel), and you are interested in purchasing a box set for $120 shipped, hit this little poll and let me know. If there are enough of you, I’ll open orders and we’ll get these books on a boat or a plane or whatever.

Well at least hes using proper safety equipment with all those aerosols.

120$ could be good enough for me to get one (in France).
195$ was too much even I like your comics very much.
Could be a nice christmas gift from me to me

Being a European the sentence “Europe – except Russia, Turkey or Isreal” disturbs me very deeply….:-X
SCNR 🙂

Well, russia and turkey ARE, for a part, in europe. And israel take part in european football (…. soccer, sorry) competition (for obvious reasons like war and stuff).

Okay, next time I do the googe-fu before I try to be a smart-ass 😀
Seems like I’m an ignorant dude 😀

Well…then again he hadn’t planned to talk that much while doing his thing, I reckon 😀

This is one damn cool looking air filtration mask!

Him.
Reply to  James Rye

Yeah, every night while he’s running around he stops to reapply the spraypaohhhhhh

Hm, so that’s what the mask is for.
Makes sence, after he said in Tagged page 10 “I’m not hiding behind a mask”, while actually he’s doing so, wearing that mask. So it’s only for his health?

Well, it could be protecting his face from stray particles as he goes super-speed as well, wouldn’t want to get hit in the face with a stray pebble while zipping around at ludicrous speeds.

Him.
Reply to  Tim

foducool
Reply to  Him.

Josh
Reply to  Him.

probably avoiding sucking in too many particulates/inhalants… Speedsters along highways with exhaust, and using up entire cans of spray paint in seconds… I guess I see it.

You ever wonder why in the Flash you almost never see Barry Allen’s apparent near-genius intellect after like the third episode?
Now you know.
The DC speedster suit doesn’t have an air filter on it.

He couldn’t find a mask that let’s him be understood? I’m pretty sure those exist, since firefighters use them all the time.

Most of gas masks have a drum like membrane, making your voice hearable outside of mask.
It’s not a standard and most of civil use mask (3M for example) don’t have it, so you need to scream pretty much.

Small mic in the mouth piece blue toothed to his phone with an earbud and a speaker. He could stay masked, talk and use his phone hands free. But if he is serious about full disclosure, maybe he should remember to lift the mask when he wants to talk? Instead of sounding like he is in a gimp mask?

I just want to say I’m really loving this mini-issue. Not quite a full round of A&D, but more than enough to scratch any itches and comes with a nice helping of laughter. These mini-arcs are genius.

Sucks that you can’t get the books sold in Aus. I would’ve picked one up but the combination of the price being in US (rip our exchange rate) and that $35 shipping fee (seriously? it should only cost that much if it’s going somewhere extremely regional, if the books are in Sydney it should only cost $5-$7 to get it to me, I guess you can only choose a flat rate with the store or something unfortunately) turned me off.

This is probably the most civil conversation a super heroes/villains have ever had together.

Doesn’t it wake you in the middle of the night to know that one day they will come for you and your children?”
“It does indeed.”
“And what do you do when that happens?”
“I feel a great swell of pity for the poor soul who comes to that school looking for trouble.”
“….You know this plastic prison of theirs can’t hold me forever. There is a war coming, and I intend to fight it….by any means necessary.”
“….And I will always be there, my old friend.”

I see what you did there.

Absolutely love the dynamic and dialogues between Erik (Eric?) and Charles

Would love to get one bookset over to Argentina 🙁

If he’s serious about his activism he can help people a lot better and more productively in ways that aren’t criminal (and small time vandalism at that).

His graffiti just isn’t really going to get his message across, it looks like some weird gang sign for a gang call the poison traffickers.

He’d do much better becoming a super hero to protect people from shootings and constantly putting his beliefs out there in the media in his interviews. But of course, in his anger and grief and lack of knowledge about how to do something positive, his actions make sense.

Well, given that I’m in Israel, that sucks!

What’s the size and weight of the book set?
Will it fit in a large suitcase and if shipped when would they be delivered in Europe (specifically The Netherlands)?

Very off topic but Tim what is the name of that crazy board game you picked up a while back that was very difficult and permadeath was quite likely?

Tagging is a misdemeanor at best. Citizens arrest would only work if they were caught in the act of performing a felony.

Talking is pretty much all they can do in this case, if they try to stop him using force, they are the ones who have become the criminals.

Well a few pages later, we learn how his sister was shot. I can’t actually get to the page due to restrictions.