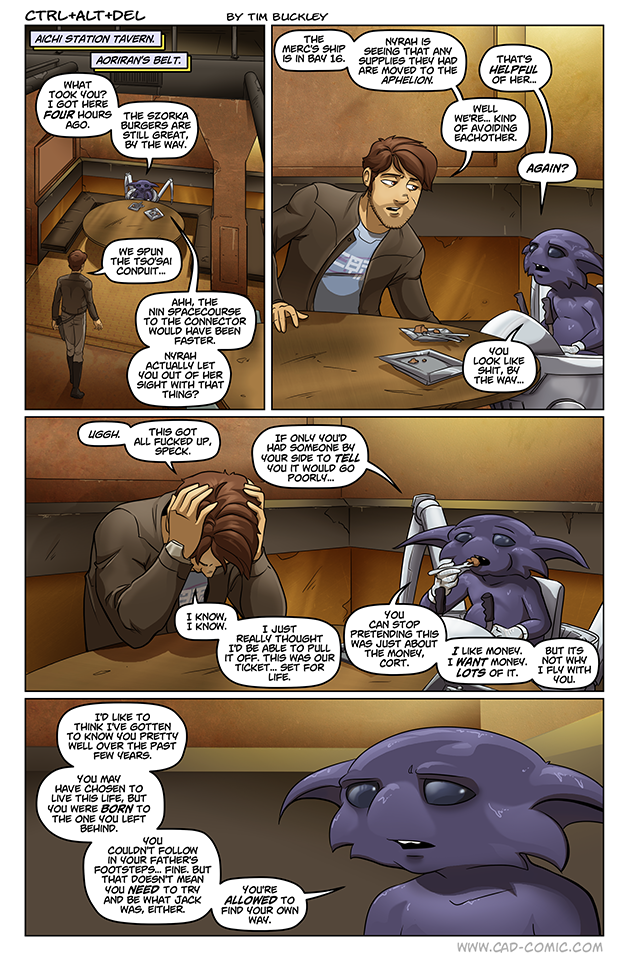 One of my Patrons asked for Cort’s Auridos Shipyards™ shirt to be made available for purchase, so I’ve done that for a limited time here.

So this is a test poll to make sure they work ahead of our next Starcaster vote, but I also thought it might be a good time to do a little “market research.”

I’m working on putting together some books collecting the work I’ve done over the past five years. There are three books I’m working on:

Now obviously I’m going to put these together with as much additional content as I can, and I can offer them digitally. But a lot of people like to own books, and that’s going to require Kickstarter. I can either tackle each book individually as its own project, or I can wrap all three of them up into one larger Kickstarter. Logistically that’s tougher and more work, but if a lot of people would be buying more than one book, it would save you money on shipping and make it worth it in the long run.

So I’m trying to get an idea of demand/interest for early planning. Each book would be >$20, and there would likely be some sort of early bird discount for buying all three, if that influences your decision at all. These are also much smaller books than the massive, heavy collection I did a few years ago, so shipping wouldn’t be quite as bad.

Well, there go the theories that Jack and Cort’s father were one and the same. Thanks, Speck.

So, we haven’t kicked Nyrah off yet? That’s good. Surprising, but good.

So Jack is Julio Scoundrel. Fascinating.
(And no, this does not mean that Cort’s father is Tarquin).
This conversation about Cort and Speck’s past is really nice 🙂

words of wisdom from speck corts own version of yoda .plus cort has a little bit of star lord daddy issues going on .

I reeeeeeeeeeally am curious about the time Spreck came to join Cort as friend. So Jack was like the Freelancer/Smuggler teacher while his father was most likely a highly decorated Officer of the Feds, but for whatever reason Cort failed his father and now “fails” to be like Jack because he is not money-hungry and harden enough to just put his own interest above all and everything. Good for Cort to have a friend like Speck with him. Though he should never give him a high-five or a hug without his suit on. xD

look at our purple melting yoda, throwing wisdom pearls around

I like it when all of a sudden the story / conversations go deep. Good work, Tim. Especially the drawing…just gorgeous!

Does Speck have to carry his own plate and utensils into restaurants with him, or is his species common enough that most places will have melt-proof spoons?

Probably his own gloves and utensils set. As long as he doesn’t touch the plate with his not-protected body parts a plate from the restaurant should be fine. If he eats carefully he could even use the utensils from the restaurant too. Maybe his lips are one part of his body that is not acid?

Based on what we’ve seen in the comic, I think it’s actually just his skin that melts stuff. Anything internal doesn’t have the same melt effect; otherwise, there could have been some serious spit attacks going on at some point or other in the temple (although there was a moment of offscreen action….). Bearing that in mind, any standard utensil set should work fine so long as he wears those fashionable gloves we see on today’s page.

My guess is that the muck is something secreted by his skin, so things like his teeth and inside of the mouth would be fine. After all, there’s no hissing and bubbling sounds when he eats his food, and as his tastes are similar to humans, I assume he gets to taste it before digestion.

He does carry some basic utensils and some nivium-chain gloves to help him interact with the universe at large. Mimions aren’t necessarily common outside of Niven II, but they are also not the only corrosive species (just the MOST corrosive), so some larger establishments will actually carry their own nivium wares.

Just a heads up – there is an auto-play video ad w/ sound on by default. First time I loaded the page was potbelly sandwiches, then Mazda when it reloaded for comments.

Couldn’t find a readily available contact button, but I found a minor bug on the site:

If you click just above the show comments link, the section with the link disappears. Refreshing the page fixes it, but I still thought you might want to know.

@Tim, are the Cort’s Auridos Shipyards™ shirt also available in women’s T-shirts? If the Medium would fit a guy that big, then a woman my size (5’3 and tiny) would swim in even the Small size.

Jane- I looked into adding women’s shirts, and a lot of them that this service offers (according to reviews), run really small, which would make finding the right size a hassle (and with lots of returns).

However there was one women’s Swoopneck tee that had great reviews and comments that they ran true-to-size, so I’ve gone ahead and added it to the store. If you decide to get one, please let me know how it works out. https://cad-comic.shop/collections/apparel

Thanks Tim! I appreciate your doing this for me! I shall be ordering one in the next day or two, I will let you know how the sizing goes 🙂

I would definitely love like a comic trade paperback (or hardbook) of Analog & D-pad and The Starcaster Chronicles. For regular CAD comics, I’m willing to wait for another compendium volume like I have for CAD 1.0.

This series has been what’s shown me that I really enjoy comic books, just not the traditional ones sold in comic shops (despite liking the characters from Marvel and DC). Would happily buy a printed book of the Starcaster Chronicles especially with the details of paths not taken. Really curious as to how this series could have turned out had we made just one different choice.