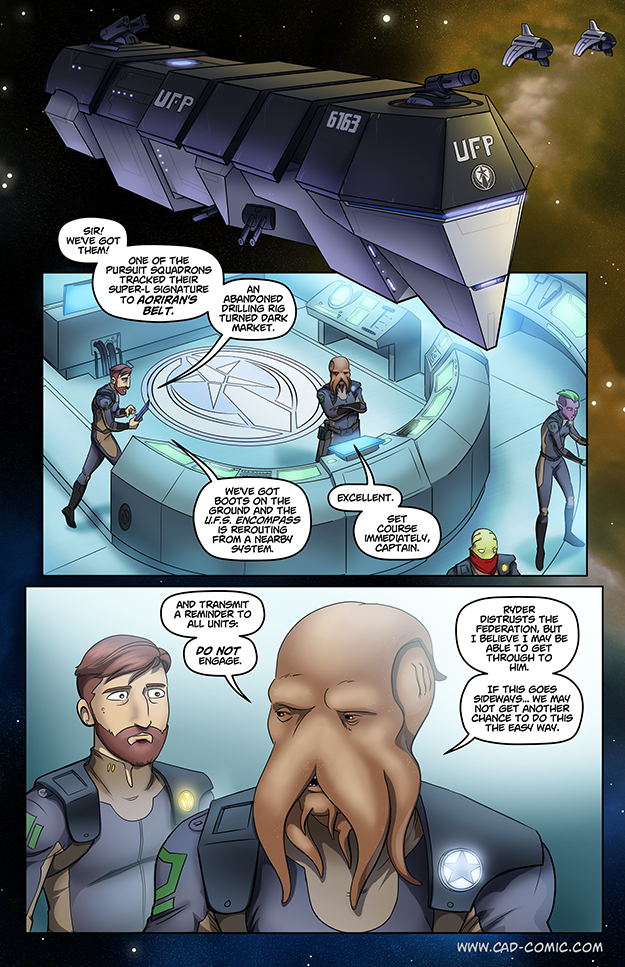 We fucked up man!

Him.
Reply to  qwerty

Not really. Look at it this way … (again) People vote for what they think is the better option – and there is no better option, both ways can be fatal. Either the distraction messes up, or the order not to engage is being ignored or it comes too late, or not through at all. Plenty of things can go wrong, depending on what the script might be.

So short version I guess is don´t think in min/max conditions with this. 🙂

A bit, but let’s be honest here. Sending a legion of spies beforehand is not exactly a great move if you want to make peaceful contact with someone who *already* distrusts you.

screw the federation
Reply to  qwerty

So yeah, you tried to fuck up, but thankfully the sensible votes outnumbered you. ?

Great work guys. (I voted for straight to the ship)

Me too. Well, it was nice knowing them, I guess.

Don’t worry, we saved you from your bad voting.

Tim, I’m curious. When you first started CAD, did you just post stuff whenever you had something to, or did you build a buffer? I know that it is different now, but I’m wondering about the state of affairs in the beginning of it all.

Author
Tim
Reply to  Him.

When I started I updated seven days a week. That didn’t last long XD

But yeah, I had a little buffer, because I started the comic, then I had to build a website to actually put it online for anyone to see.

Well, this may still turn out in our favor. The problem is that the Merc is also tracking the federation. If the group goes directly to the ship, then the fed’s will still track him. A diversion could allow the group to escape without the federation (and by proxy, the merc) seeing where they will go to lay low.

Or we could loose an important part of the ship again during the resulting chaos. still a toss up but I dont think this was the safest choice with the info we had. Chaos can lead to an inadvertent firefight and geting in a firefight is always riskier than just not being there.

screw the federation
Reply to  Merendel

It was the only safe choice with the info we had. Letting ourselves get taken in by a corrupt organization that also has a merc following them to get at us is a stupid, stupid plan. I don’t know why so many of you want to deliberately fuck Ryder over.

I may not trust the Federation, but I trust squidface. He does care. The only issue is when the assassin swings by. O.O

The Inqusition
Reply to  The Legacy

Nothing like a little Xenofobia.. It makes the world a better place.

All glory to the God-Emporer

Him.
Reply to  The Inqusition

No one expects the Spanish Inquisition?

Him.
Reply to  The Legacy

Quell is one of the good good guys from what I can tell. Unlike the Turncoat Fed officer on the Whatsitcalledanian sector, he would rather broker intergalactic peace than get rich and have mild leniency in the aftermath. That’s not to say he’s on Cort’s side…but at least he is a good person.

Allen
Reply to  The Legacy

screw the federation
Reply to  The Legacy

Squidface is one measly cog in a giant, corrupt machine. He’s more trouble than he’s worth. Avoid at all costs.

Well, This is going to hurt! Why did everyone chose the wrong path. Acting anything, but normal is always asking for trouble. Calming going to the ship was the wise call.

My thoughts exactly. We were told that they didn’t want a confrontation from the get-go. We knew the Council wanted to keep an eye on Cort. And we know that Ryder’s one ally in the Federation is on his side. So for me, it was an easy choice to just go for the Starship and get outta dodge.

I don’t know what either choice changed as far as what this page showed. They’re still going to follow them. We didn’t see what the distraction was or what happened to the officers that were watching them. This page feels like this could have happened whether they went to the ship calmly or they did the distraction. Only difference being we don’t know if the officers would have tried to stop them at the ship or not.

Of course the choice didn’t affect this page. This ship is systems away at the moment.

BUT this page might have affected readers’ votes, so it comes after the fact.

FTR – I’d love to see the ‘what might have happened’ scribbles like you did before https://cad-comic.com/images/COA_storytree.x60343.jpg
I don’t know if you’ve done that for all of them? Maybe a Patron only kinda thing?
I also used to keep my finger in the page of the ‘choose your own adventure’ books so that I could flip back and forth and see where the other choices went 😀

Tim, In the past you have shown a quick tree break down on the different paths how certain choices we the readers have made changed the story. Are you thinking about doing the same thing again?

The book will contain a section where I discuss alternative paths. But no, a tree is not possible for this story.

Would be fun at some point though – like Zero Time Dilemma. 😀

Thank you for your reply

They don’t want trouble, but they also are not going to want him to leave. I still definitely think that this was the best option, especially with the psycopath hunting him as well.

screw the federation
Reply to  Greeny_putyed

We chose the correct path. You’re the one complaining about not choosing the wrong path.

Quel, you never hand the universe a straight line like that.

…….shit. This is as good as us having drunk from the bottle that says ‘Definitely NOT poison!”, isn’t it? Sorry we readers just made your life harder, Quell.

as if the easy way was ever an option

Mr B
Reply to  foducool

Of course it was. And a bunch of us voted for it. But the landslide “Oops, in hindsight i guess” people screwed us over… Oh well, it is just a comic, and if the chaos makes quel think about “different ways” then it might not all have been for naught…

screw the federation
Reply to  Mr B

Nah, the landslide correct answer people saved us from you screwing us over with your ridiculous “turn ourselves over to a totally corrupt organization that also has an assassin on their trail looking to get revenge on us” votes.

You’re welcome, by the way.

Well, at least I was one of those who voted “go calmly to the ship” instead of “cause a distraction” so I know I’m not to blame for what happens next. :p

But I hope that they still manage to get to talk calmly and sort out something equitable in the end. Maybe even something like what I already suggested earlier: Cort agrees to help in case of war, in return for being left in peace otherwise.

I still think it’s Cort’s best decision to make a diversion and break for it. If he had run straight for the ship? No engagement, but they’d be much better able to track. There would eventually be a confrontation between Quel and Cort. And if that happened, there would only be two options: Join the Federation, accepting everything they offer and what inherent dangers are there which only Cort knows about, or try to fight out of an outnumbered, outgunned, surrounded situation. There’s currently no Federation ship at the location, only Federation officers, and so by causing a distraction and… Read more »

Yeah the comments on this page are kinda backwards to me too. We know that Quel is his buddy, but we also know the rest of the Federation is kinda corrupt and crazy. Causing a distraction and sneaking away will still keep him off the radar of assassins, at least that’s how I see it.
I regret nothing about the way I voted haha.

Bro, we all know that outta the 3 requirements for the distraction “not lethal” will be missing a mark. So we get a loud, chaotic and lethal distraction, ending up with the entire destruction of the space station and thousands of deaths including the Fed agents turning Cort into a terrorist in the eyes of the Fed who will hunt him down for the kill and no longer will ask him to join them.^^

That’s kind of going to the extreme, suggesting that Speck’s suddenly going to turn to mass-murder. Most likely, I’m taking his comment as a funny quip, meaning that he couldn’t guarantee that his distraction wouldn’t cause injury or death. Which, to be honest, is realistic.

Though watch – for all you know, the Wednesday comic will feature Speck with his guitar, doing an impression of an 80’s hair band. Loud and non-lethal, but not so chaotic. And he’ll melt an amp at the end for effect.

If you were to take his quip seriously, it could wind up being a Chaotic and Non-lethal one…which is to say, Speck could slip by the main generator, melt a power cell, and place the backup cell right next to it. Chaos ensues even after the piece is replaced, and because it is replaced no one dies (assuming there isn’t anyone on life support)

^This guy gets it.

Of course it was the right one. The last thing we want is to wind up in the hands of the Federation or being tracked by the Federation. The Federation itself is insanely corrupt, and then they also have The Grin hot in their trail. An organization and an assassin we want to avoid. Plus everyone seems to assume two things about Squidface: 1, that he’s on our side, and 2, that he has power. I don’t trust either of those things. If he finds himself in a position where he has to choose between loyalty to Ryder and loyalty… Read more »

“Ya know, somehow ‘I told you so’ just doesn’t quite say it”

…..I only voted for him to take that path. Tim’s the one who actually WROTE the murder.

Man e3 was funny. Thank God he’s writing this though

“Yeah! How come he doesn’t just do the one thing day in, day out for the rest of his life like I want him to?! Dance monkey, dance!”

HEY GUYS, HE’S FINALLY GETTING IT! WE MIGHT NOT NEED THE ELECTIC CATTLE PRODS AFTER ALL!

This is going to go sideways. We all know it. It’s the will of the people. XD

How do you know that? This is space, after all; there’s every chance it could also go up, down, in a loop of indeterminate size, or backwards

But there’s no “up” in space, you just…wait, someone already made that one

Things rarely ever go the easy way to begin with. Why should that start now?

It’s worth noting that while sneaking would be the “right” path, chaos is more in character for Cort, with or without knowledge of this page’s implications.

Ya know. I just realized how amazing his lighting effects are becoming. the slightest hint of fuzzy blue light. gorgeous!