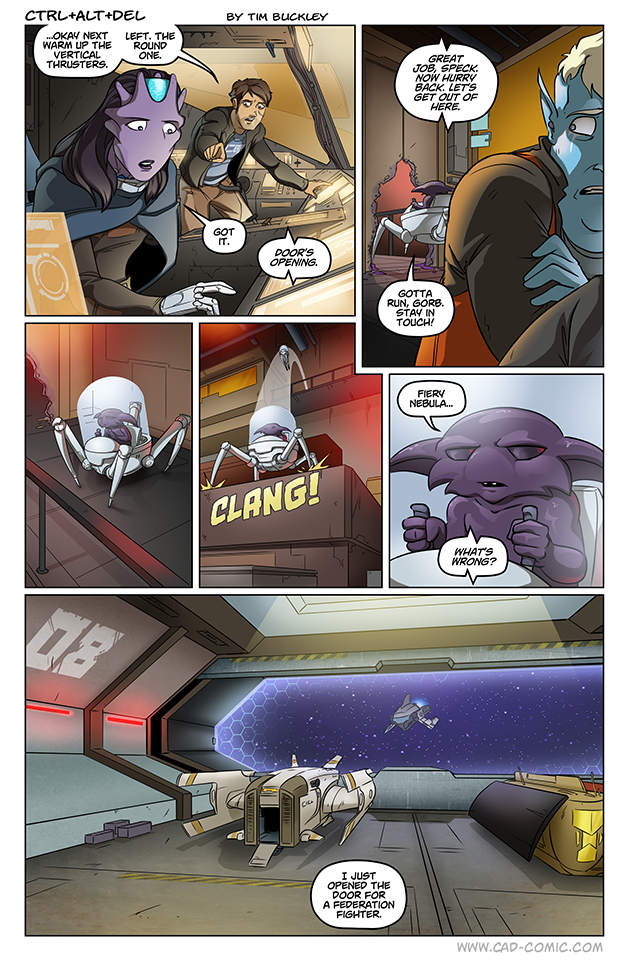 Supercurious… Everything Speck touches melts… how do his joysticks not melt?

The metal they’re made from is Mimion-proof

Erik B
Reply to  Edwin

At least the security guard was able to keep his hands!

Well, at least one.

*rolls across the ground*

Were this D&D, would this be more of a Nat1 roll, or a surprise encounter (from the Players perspective, IE Cort, Speck, Nyrah, as they had no idea whats going on outside).

Just a bit of fun curiosity.

Probably surprise encounter. Like I guess if the DM really wanted to he could’ve had the Speck player do a roll to see if he noticed the fighter on sensors or something, but that knowledge really wouldn’t change what they were doing (like Speck still needed to open the door, they still need to get the heck out of there and flying out is still their only option) so seems kinda pointless imo. It would be one of those “Congrats, you passed! You get practically nothing out of it but congrats!” checks and those are rarely fun.

DM
“I have devised a sophisticated challenge which will force you to go into hiding on this station. There you will meet the underground resistance movement and….”

DM
…… “Yes, AND you encounter an incredible threat that was most definitely on its way to face you already and not something I just pulled out of my ass.”

Pilot: “I fire all my missiles at the incoming threat!”

DM: “”You… you’re still in the docking bay. You don’t even want to launch before–”

The better DM reply would be:

DM: The explosion lights up the loading bay, alerting everyone within sight. In moments, an entire armada appears in your view as they change course in your direction

I believe this is the stolen fighter which if memory serves, has had its weapons and navigation shut down by remote control, leaving nothing but the bypassed engines still running.

So if Cort is quick, the most he should have to fear from this particular ship is not running into it, or it not running into him, which (considering that the other ship’s navigation systems are off-line) shouldn’t be that difficult to accomplish.

The one thing which might be a problem is if the fighter decides to do a suicide run and crash into them before Cort can take off.

Oh….oh, that’s GOOD, Tim. Drawing Gorb like that so we can’t quite tell whether his final injuries are physical or just mental/emotional…..I approve. Well done.

And hey, they got reunited pretty quickly, all things considered. Should have expected a suicide crash appearance by Mr. Happy to ruin the final moments.

….Are we SURE Cort’s not in a proper state to starcast?

Gorb has at least one of his hands. If Nyrah can get by, he can too!

Redemption_rocks
Reply to  The Schaef

Whelp, just when things couldn’t get any worse…

It looks like there is a fold on the sleeve there,..

Did speck “just” melt off one hand?

I believe that’s his leg. He’s sitting on the floor with his legs pulled up close.

Burajon’s right. The whimpering ball of tears formerly known as Gorb has currently assumed what’s known as the fetal position, so that sleeve you see is actually his upper right leg

Further thought – if we can see his upper right leg like that, I think it’s a safe bet that the rest if his right leg is also fine, which means at least 62% of his limbs are still attached (right leg and lower, left arm and attached, upper right arm)

Given the fact that Gorb hasn’t passed out, I assume he’s fine and dandy (as much as anyone can be in such a situation).

A side not for Tim: I’d appreciate if the site stopped logging me out every week, especially since I checked the “remember me” box.

If any of the above – there is your problem.

No, no and no. And other sites don’t log me out ever.

I don’t know why, but that’s a really satisfying “dun dun dun” moment. The exasperation is set up and delivered just right.

That’s… not how it works. *digs face into hands*

That walker’s a lot more mobile than I’d realized if it’s able to jump like that. Hm.

At… at least the ship has no functional weapons?