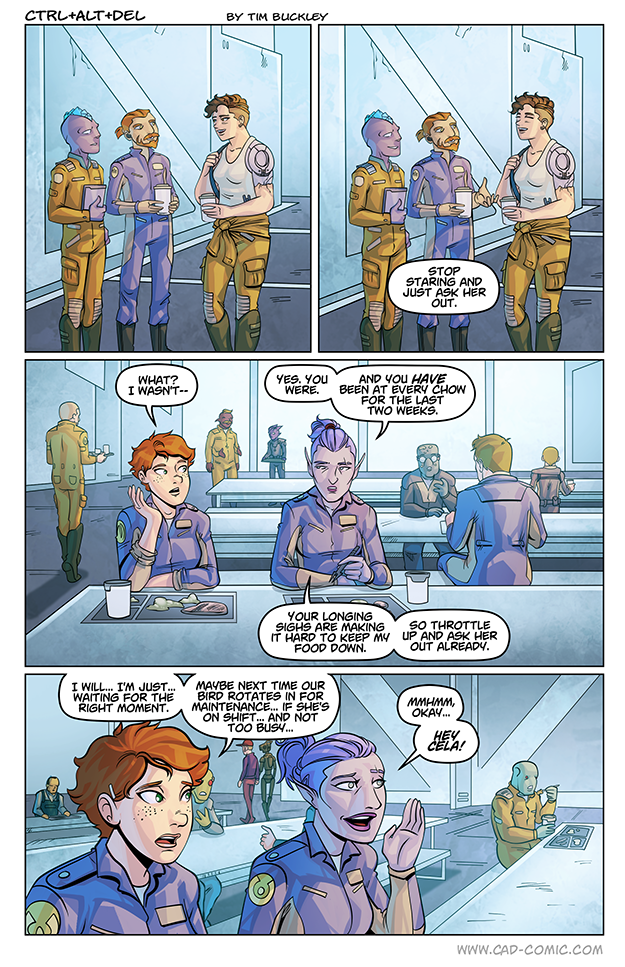 Hmm, not the start I was expecting but I’m piqued.

Why do I feel everyone in this room is going to die horribly a few strips from now?

GRR Martin. Start up a book with a bunch of strangers so that when you brutally murder them all, nothing major is lost and you’ve set the tone for the rest of the story.

If Cela says yes and just gets vaporized or spaced ima cry.

If that’s the case, I just hope the vaporisation happens soon enough to spare that poor girl the embarrassment.

I like the new art style. Reminds me of something I can’t quite peg.

Author
Tim
Reply to  -The John-

If you mean the colors by Nicolas Chapuis, he also colored the last issue (as well as the very first issues of Starcaster).

The ink looks different. The blacks are fatter now and it really give everything more volume. Colors are great as well but they have been always consistently good.

Darkening
Reply to  -The John-

So artificial shoulder but they managed to save and re-attach the arm? Interesting.

Maybe it’s not the result of some injury but an intentional augmentation of a shoulder?…

Or just really realistic (flesh-like) coating around the prosthetic, though that does seem unlikely here

could be a crush injury, so the local area was trashed but the rest of the arm was still healthy/had nerve connection

hah I’m out, I will wait for the Etan and gang run to return. man, so freaking uneasy and cringe! ah, the diversity, ruining the entertainment industry since the middle 2000’s.

Girl having lunch with an alien: Doesn’t bat an eye.
Girl has a crush on another girl: WHATTHEFUCKITYFUCKISTHISNONSENSE?!

You know Lucas is gay, too, right?

You can take your homophobia elsewhere, you won’t be missed.

I know he’s gay, and I dont have any problem with that. if I have any phobia or bias is against laziness and use of current trends to just please or signaling for a certain kind of audience. you can do better as you did with Lucas, Ive to say it was well paced and written. but this… another character with her sexual preferences exposed? lazy as he’ll, we don’t have more then 8% off all population samples like that. but you have to pander and make it look like 35% or something like that.

First of all, I’m sorry to be the one to break it to you, but the existence of gay people is not a “current trend”. Second, in the first draft of this script, the characters were named Pilot 1, Pilot 2 and Engineer. The dialogue didn’t change one bit between then and the moment I had to figure out who these characters were going to be in order to draw them. So I know for a fact there is nothing inherently gay OR straight about the conversation these characters are having. The point of the scene is to have a… Read more »

According to statistics, about 10% of the population is gay. Less so in nations that throw them off roofs for being gay, but otherwise, every single person you meet in this world is 10% likely to be gay. That probability translating into a comic doesn’t phase me in the slightest. It would be different if they took an established character like Batman, made him a woman, and set her militantly lesbian nature as the main backdrop of the series. You know, something like that I would be opposed to. But this is just, “Oh, this person we just met is… Read more »

Honestly, I feel kinda sorry for this guy, his life can’t be an easy one. Trying to avoid any mentions of “the topic” nowadays is like dodging raindrops in a storm. With wind changing every second. While hopping on one foot. And- well, you got the idea.

Well, we were warned it was named Starcaster Chronicles for a reason. Good to see a different part of the universe in this case, unlike a certain Abrams trilogy…

“I can’t wait to get into the fine details of each new character’s backstory!”

I already love them, but I’m warnin’ ya, Tim, if this turns into Bury Your Gays I’mma fight you.

On a re-read, I just noticed that the red headed man looks like Player 2.