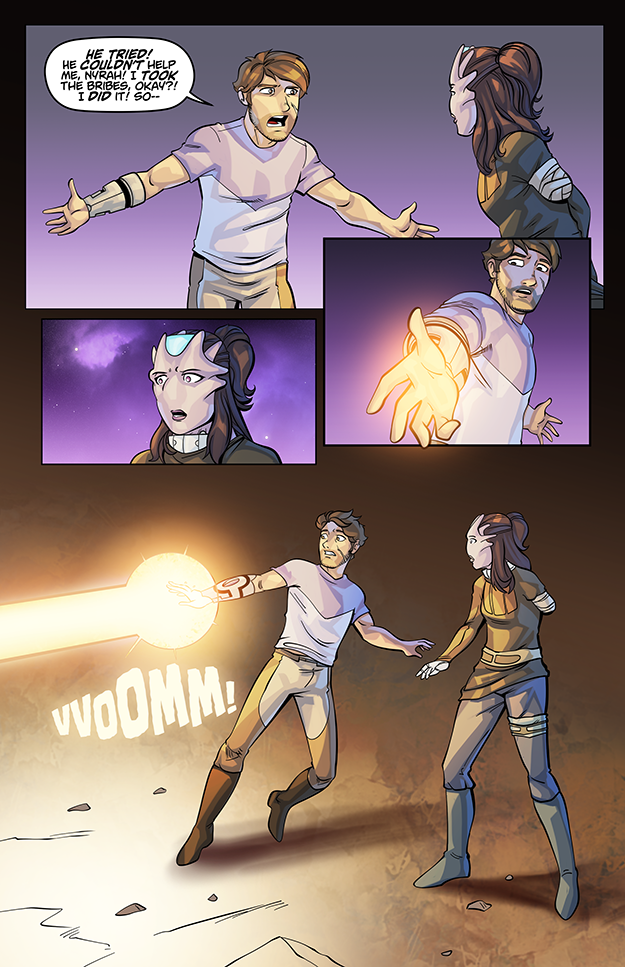 Well… It’s a good thing he wasn’t pointing that thing at his face! Nyrah gave him sage advice.

yes, yesssss
give in to your anger

That is one HECK of a lightsaber…

Let’s just be glad it wasn’t double sided, or Cort would be missing a shoulder.

well he might have liked that it, wouldn’t be attached anymore.

Anger or perhaps honesty is the true trigger…

Unlucky man if it is you got a Nyrah strapped to your arm forevaaaa….

Could be that dishonesty and guilt was what was holding him back. Maybe the starcaster didn’t consider him worthy, or Cort himself didn’t. Maybe lifting this weight is helping him put his mind to rest, letting his thoughts actually reach the device, so to speak.

Nobody
Reply to  Vice Versa

Pretty much what I was thinking. You need a clear and focused mind to control it and normally he is distracted by the nagging guilt of what he did.

Life or death situation gave him that for a few seconds. Full control will require him to get over his past and move on.

Congrats, he got it to turn on and now it’s just about the other thing…turning it off.

Ah, so it is self loathing that activates it.

“That’s my secret captain, I always hate me.”

Cort’s been running from his guilt so hard that he’s taken to generally repressing his emotions. He couldn’t get properly angry or enthusiastic because the one big emotion waiting for him if he ever opened up to himself was that shame and guilt.

See? Just glad he went for “arms spread out wide” rather than “point straight at you.”

or went for the suck muh dick pose

“Sir, why did you destroy that planet? It was full of kittens and fluffy pandas!”

Welp, that makes the decision to not trust Quel back then even worse and I am pretty sure most people didn’t went with him because they thought he had betrayed Cort and would do so again.
Man, Cort is such a tragic figure in this whole thing. Trying over and over again to help the son of his best friend and said son just refuses the help and it only gets worse with every help offer declined or spit on.

I think your names are mixed up. Cort is the MC and son.

‘Cort’ wasn’t the unspoken subject of the last sentence, Quel was.

Nope. Still stand by my decision. My decision was based on the fact that, once Cort was in the hands of the Federation, there would be nothing that Quel could do to protect him. Much like they don’t just let anyone in the military tour a nuclear weapons site, Quel would have no ability to affect what happens to Cort after the Federation get their hands on him. If the Federation decided to vivisect Cort for not playing ball, Quel’s ability to protect him would amount to little more than a ineffectual policy protest. In fact, in light of his… Read more »

I remember when Sgt. Johnson from Halo was rumored to have eyes so powerful that he had laser vision. Like a Spartan Laser. This makes the UNSC seem like a joke.

Well, it worked, but at what price?

I love the power Glove. It’s so bad.

Wait, is that recoil making him lean back? I love it when energy weapons actually have recoil, like they’re actually a dense plasma and not just a beam of photons! Which makes more sense anyway when you’re siphoning power from a star to shoot the pew-pew.

Could be recoil or it could just be him reflexively flinching away from the planet slicing death beam that just ignited in the palm of his hand. hard to say one way or another with a single frame of action.

I don’t know about you, but whenever MY arm spontaneously shoots planet-slicing photon bursts, I just stand there, unflinching. Like a MAN.

AND you don’t look at the explosion!

Probably recoil, his hair is blown back too so theres some physical OOMPF coming off it

I was rather thinking about the inertia of the photons while reading your posting. That would be some serious kind of beam.

So the question I have is will Major Danton have felt the starcaster activating? The chase could be on here very shortly if I understood the comic correctly! I’m really enjoying this strip!

Oooh, good call out! I can see that happening!

With another successful starcast confirmed, I can’t see Vectanix leaving this one up to the Darkstar Syndicate. What an honour it will be for Cort to meet with the Dranglaex personally. >:D

Didnt Danton say that he didnt have the sensitivity to do that only the other SC Dani? did

He said maybe he could sense an active one but only she had a chance to detect one that was not in use. I’d say fireing the laser counts as active so its possible.

unfortunately, its pointed at the ship ^^

It might have been if it still was landed.