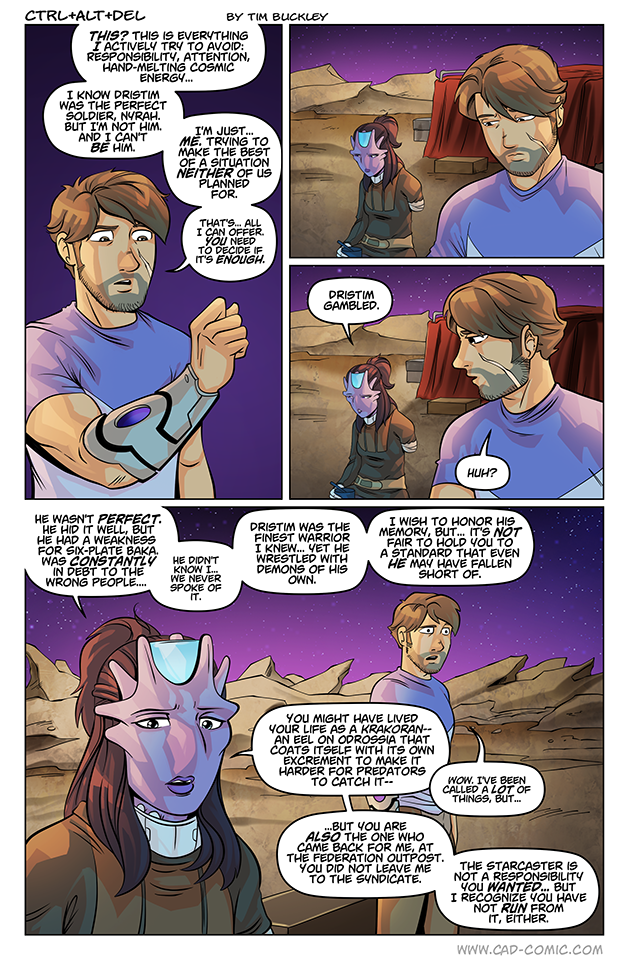 That face as the slow burn starts to hurt….. Well done.

that was a very imaged insult lmao

Yeah she’s been holding on to that burn for a while, just waiting for the exact right moment to pull it out.

Or is it the other way round? 😀

not the galaxy the hero deserved but the one he needed?

I foresee him eventually having to make a choice that someone too greedy or too altruistic would get wrong.

There are people so tied to their values that they are totally inflexible and thus can’t get much done. Some minor flexibility does not rip your values to shreds but it might let you make things happen.

Problem is, there are entire movies out there who’s plot is about a good guy who basically went “maybe… let’s just be a little flexible this one time…” and then watched their whole world burn from “that one time”.

Nyrah is starting to get more forgiving, I like it! I felt like she would be furious with Cort for longer for lying to her about the bribes. (and us, right? We were always under the illusion that Cort was squeezed out, not actually taking the bribes?)

Not That Brian
Reply to  Esc

I held no illusion that he was on the up and up. I always assumed that he did something he shouldn’t have.

That said, I also didn’t expect that he was actually on the take. He always struck me as someone who was benefiting on the fringe: Aware of the bribes, and while not taking them directly, being compensated for his silence in other “non-tangible” ways.

Seeing him reveal that he was actually on the take was interesting.

“You might be a shit covered bottom dweller….But you’re an OK guy”

This may sound weird. But I went back to the first strip for The Starcaster Chronicles. And wow has the art improved.
It wasn’t bad before, but put them side by side and you might think it was two different artists.

Nearly a decade, oh come on– – – – OH! Wow, it really has been 7 years since the first episode. It’s hard to believe it’s been so long. As for the art style, it’s definitely improved.

First time I read someone being insulted as a shit-eel. xD

To Further add to the imagery! Mating season must be…Slick.

That was unkind. Borax for the mind’s eye!

Curious why she has a mirror for a forehead….

I mean, maybe there wasn’t enough tissue, but couldn’t they have got something a bit more in-palette to blend?

So, Distrim was baka for Baka?

Im so happy they can be friends again..

Now for a crash landing.

That’s the face of a man who is horrified and insulted, or is putting 1+1 together the 1st time over some insults he didn’t understand the 1st time.
Hey, Nyrah can unclench her morals in a casual setting after all!

Wait, is he remembering having eaten krakoran? “Kraken, crackers, whatever.”