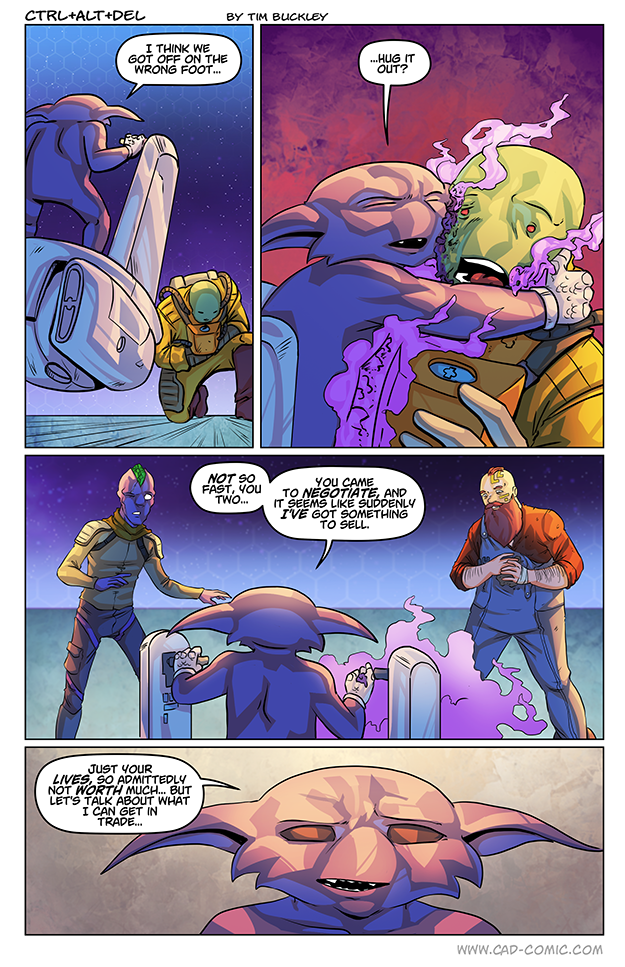 Well, that was fast enough.

I wonder if hugs were the way they ended fights in mimions kindergartens.

I mean, they don’t melt each other so…

Wohoo, way cruler than expected. I kinda like it.

I dunno, it just melts one heart to see that kind of loving embrace from Speck I’m sure. lol

…and sundry other organs, but who’s counting, eh?

I’d say my heart melted watching that loving embrace, but it wasn’t quite mine.

Righty’s heart has room to expand three sizes this night!

It was a hug to die for.

Tim,
did you enjoy drawing the picture number 2 as much as i enjoyed looking at it? 😀

I am curious on how many times that was redrawn to get a image suitable for all audiences. That could have been allot more gruesome/disturbing.

Aw, yay! Lefty gets some mercy for trying to avoid the fight! And Righty might survive too.

I’m a bit sure you can’t just go melting people even in a backwater space station..the reward on his head must be high

Was it deliberate tho?
I mean the man was quite clumsy, he fell and I forgot I was a mimion and tried to catch him… Tragic really…

He is an outlaw already, I don’t think this changes much.

Obvs he was expecting fight, that’s why he came with goons

Maybe a bit of “cliche” for my self, but in outlaw places violence is fine, but not murdering, because that bring too much attention.
Anyway, is true even in the real world, there are places where people is killed and the authorities don’t move a finger…

For there to be murder, there has to be a body left. Not just some purple goo.

I guess the three made sure that any attention was currently unavailable.

He was threatening to rat him out to Feds. Bring the authorities to the station probably wouldn’t have gone over well.

It’s illegal for a mimion to even be on a space station, but that hasn’t stopped us so far.

Where was this established? I know Cort joked about being nuts flying with someone who could melt the ship, but I don’t recall it being illegal.

One of the reasons Tim so so highly regarded as a storyteller is that he knows what needs spelling out and what can be left up to the audience. After all, when we’re dealing with such precisely crafted worlds as the ones we see in Analog & D-Pad and Starcaster Chronicles how could you cover all the relevant laws and societal norms without prefacing it with a thousand-page treatise? In this particular case, Tim has faith in the reader to realise that the laws governing Mimions on space stations would be at least as stringent as the ones we have… Read more »

Wow. Danger cuddles. Thats quite the burn after killing somebody, wonder if the guy on the right is even okay, some muck got on him near his heart (he looks human atleast so prob).

its possible mimions can “focus” the acidity levels when using that projectile attack. in this case, the little bit that hit the human was enough to damage clothing, but since he wasnt the main target like the big green was, it didnt do more. so when a bit of splatter hit him, it didnt melt halfway through. or maybe the acid levels need to be adjusted for different races, and the green ones need less than the humans do, so a wardrobe damage for a human ends up turning green bald and arrogant into half the being it used to… Read more »

Its acidic, so volume counts. Acid reacts to make salts and water, but only so long as there is chemical left to react. This is why, after catching him off guard with the throw, the bad was finished off with more direct contact.

Righty got a much smaller dose, though he’d probably still want to finish removing those overalls.

Then it just dissolved into nothing lol

that was entirely deserved

I’m surprised that Mimions aren’t flagged by everyone in the known galaxy as *Do not approach unless covered in nivium* as early as galactic kindergarten. Like approaching high tension electric wires or following strangers into their shady freighter marked “Free candy”

Speck pretty much terrifies everyone he sees up close who thinks he might be annoyed with him. But considering the fact that it’s extremely dangerous for a Mimion to be off-planet (they have this curious problem of melting through floors and straight out of starships, not to mention into the depths of a planet) you almost never see them.

So you probably run into people who have heard of them, but don’t recognize them by sight, and people like Righty here, who probably flunked every class he had and brought a wrench to a fight with a Mimion.

To be fair, the wrench could hurt Speck, but the wrench would dissolve almost instantly on constact.

Most it’s going to do is knock him off his Nivium-coated carrier.

Which will pretty much kill everyone as he dissolves straight through the floor and towards the vacuum of space.

I think the one guy said he didn’t tell them it was a mimion.

Even made money outta that hug. XD

I’ve been noticing a trend in the characters that while both of them are comfortable using violence, Cort is much more restrained about it than the mimion (whose name escapes me).

It seems the mimion almost enjoys these kind of engagements. Probably from spending a lot more time in the underbelly of the galaxy.

thetruerift
Reply to  Not That Brian

His name is Speck

It’s easy to remember, just think about what he flung at Bubbles here.

Uhh, Mr. Overalls, you probably don’t want to put your hands on that.

I would suggest they offer something that the guy who hired them owned that they can go retrieve. A good deal for everyone!

I’m just surprised they didn’t run and why would you F with a walking acid tank without some kind of weapon, like a lot of baking soda. The melted blob wasn’t too bright I think.

The green ones never are in this story. The worst military officer yet (well, competing with the guy who nearly sold Nyra back to the enemy) ignored his superior’s command to sit-&-watch and decided attacking a non-aggressive fleet would bring him glory.

I think you missed something there, because that officer did not attack a non-aggressive fleet, the fleet of criminal ships were the ones launching the attack. Ulogg’s orders were to stand by and oversee ‘operation convince Cort to come quietly’. Then Grin tossed a small criminal fleet at them as a distraction while he made his own move to seize the starcaster and/or kill Cort. (Which Ulogg then misinterpreted as a rescue attempt, since he didn’t know the Cort and the criminals weren’t on the same team). There was nothing Ulogg could’ve done in that situation that wouldn’t make people… Read more »

Considering he’s scraped the muck off for credits before, I don’t think it’s that big of a deal.

How did you NOT get a black BG for text??
Anyway Lumi, I’m betting Speck would have shed some acid for money even if it was difficult/painful/hard to regenerate. Money is vital and these guys repeatedly land in desperate situation.

Ah so That’s what makes their acid so potent. It’s Hungry type that keeps working after initial contact until nothing is left. As opposed to the surface kind that just dissolves as long as the source of the acid remains in contact, but no longer potent once that is removed. For chemistry terms the difference in strength between weak nitric acid and strong fluoroantimonic acid.

I love Speck’s laconic cheer and brutality so, so much.