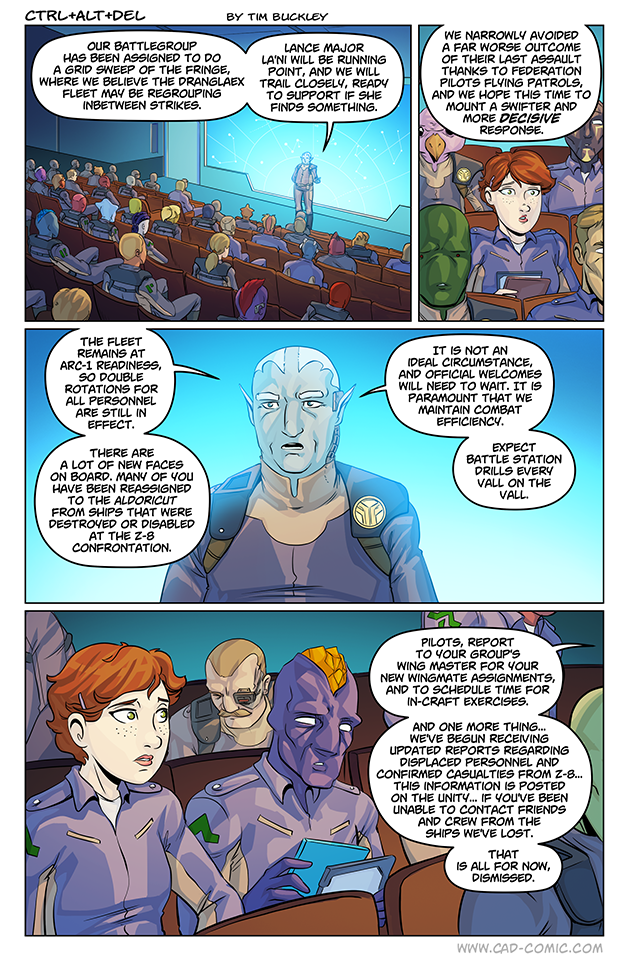 Not exactly uplifting, but informative atleast.

That’s how a LOT of military speeches are, really. They don’t bother with morale, they just give information that is deemed useful. How you process it is up to you.

they don’t need to be uplifted, they’re in SPACE!!!

what is “every vall on the vall”?

equivalent to “every hour on the hour”

cant expect the universe to have a time system based on planet earth now, can we? 😛

No, that can’t be right … the entire universe is terracentric; it’s gotta be!

And they speak english to! The brits really did some excellent conquering it seems! 😮

Since all aliens have two arms two legs and a face, I don’t bother for the common language and measurement units

I think the canon argument there is that all of those species were cultivated by the Aug.

That’s exactly it. Starcaster Chronicles has an actual reason for Star Trek Syndrome, where 99% of the races are bipedal humanoids, because all these different races are creations (descendants?) of the Aug. Because they share similarities in DNA with the Aug, they are able to use their tools, hence, the Starcaster. We’ve seen some non-Augish races… the only one that’s coming to mind is Ssissimias, and that one’s pretty clear because they’re a colony of sentient worms inhabiting a corpse. I *think* that mimions aren’t Aug-descendant, but I’m not 100% certain on that. Speck’s obviously a bipedal humanoid, but his… Read more »

Star Trek has a reason as well: TNG “The Chase” — Ancient aliens found they were the first/only life out there, and made it their mission to seed the galaxy with life. Humans, Vulcans, Klingons, Cardassians, etc. all have the same distant ancestors.

I read that as Kardashian…

As per the TNG episode The Chase, Star Trek has much the same explanation for Star Trek Syndrome, as well.

A sure fire way to both kill morale and decrease effective readiness. If you KNOW that a drill is going to happen on the hour, then you’re pre-prepping for the drill to happen. Which is great if your goal is to look good in drills, not so much if you want an attentive and responsive crew. What happens if they make hostile contact on the hour? Sound general quarters and get everyone thinking they can be a bit lax because its another drill…

if you want an attentive and responsive crew are you attentive and responsive when an alarm goes off? When you are/were in school/work/shopping? I work in a supermarket and when our fire alarm goes off maybe a few will look up to see if something is going on and then just continue their shopping because the chance it went off by accident is greater than for an actual fire. These people however are on the edge of their seat. A lot of their friends just got killed. They will not lax “cuz it might be another drill”. If an alarm… Read more »

Harsh. that has to be devastating to morale despite the drive for revenge it’ll inspire for a while.

In case you really like this story (I do!), then you might consider becoming a Patreon for the Starcaster Chronicles asap. Why? Well, it would allow you to read right up to issue 12.16 immediately, AND it will allow you to still vote on the biggest decision probably yet to be taken in this entire storyline… and for the record: Tim doesn’t sponsor me, but it’s a really cool plot & decision, and I would hate anyone to miss it 🙂

The Legacy
Reply to  Martin Junginger

Oh boy, I better start catching up then! 😅 Been neglecting reading it as of late due to RL.

Fringe. Sounds like where Cort and the others are, so she may run into them. That’d be cool.

But if they never cross paths, it’ll still be fun. I like the story and setting being presented from different perspectives, one way or another.