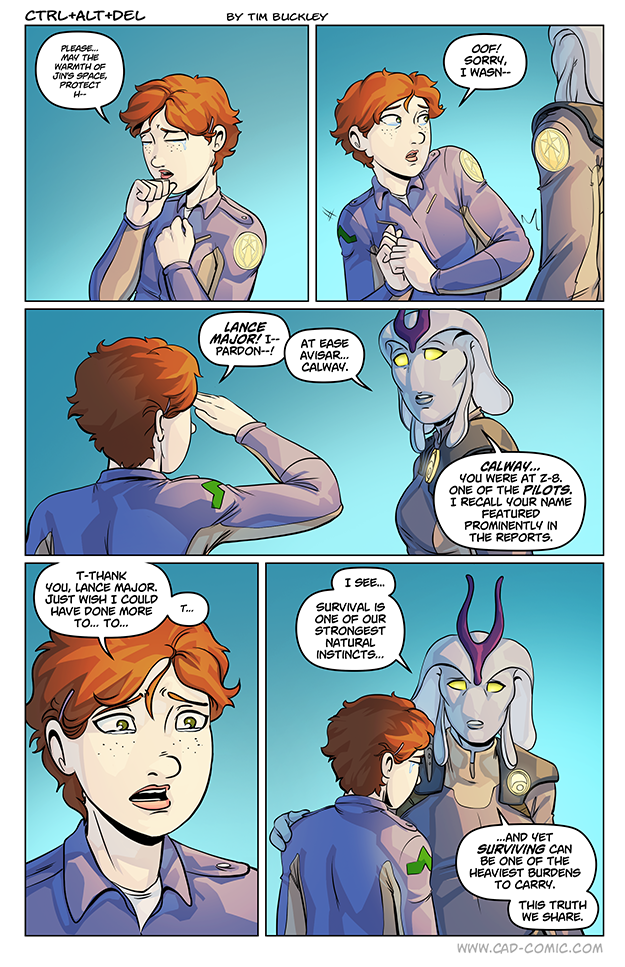 The survivor syndrome, hard to deal with

That lady has a starcaster right? (the one with the long ears)

Yeah. Also rumours say the last of her kind.

Erik B
Reply to  FuzzyT

*one* of the last of her kind.
“Her and a small band of refugees were all that’s left. Took them two chryons at super-L to reach us, but she got them her alive, barely”

Plus, she’s comforting Janora, who is a wonderful amazing warm cinnamon bun of a character who must be protected and cherished at all costs.

… why oh why then did my brain immediately think of a flag with the words “Death” pop?

Redhead will end up having the second Starcaster, called it now 🙂

What second starcaster? I guess there’s two that we never got the details of

The Dranglaex have one, the Federation has two (the individual in the panel is one, and we haven’t met the other Starcaster-wielding Federation officer) and everyone was looking for the fourth, which Cort has.

We have met the other Federation Starcaster-wielder, very briefly in Chapter 8. Cort’s ex-partner was questioning him about a wielder’s ability to sense another wielder. His name is Major Danton.

Also, there are two more Starcasters that are accounted for in the possession of another group, but Speck was cut off before he finished his sentence, so we, the readers, do not know who has those last two.

I believe there were only 3 total known in existence, with Cort’s being the 3rd (and the 2nd in “Federation” hands)…

Erik B
Reply to  Mano308gts

There are 6: Two in the Federation, one with the Dranglaex, one with Cort, and two others that may be known to be somewhere, but we aren’t aware of where they are, or who they are with.

How does he make such in depth characters with really just a several panels of dialogue and scene setup. Feel like most movie companies could learn from his story development style.

Because Tim has been writing for years, and used that time to fine tune his ability to develop characters. He’s always had talent, but when you combine talent with over a decade of practice, regularly almost uninterrupted nonstop updates….well, this is the result 🙂

I think the harder thing is how on earth does he manage to write and plan a coherent story when the audience can “choose-your-own-adventure” the entire thing off track.

I believe he has mentioned he only gives choices when he has good story ideas for both routes (or something to that effect), so it’s not like the audience can truly derail the story with their choices.

Erik B
Reply to  GeorgeV

We potentially could derail the story, I believe. Tim has always indicated that he has different paths available, depending on what we choose in the polls. I think early early early, like issue #1, he may even have indicated that if we choose poorly, one or more major characters could be killed. We seem to have avoided that so far. Thus far, there have been mostly decisions that appear small on the surface, but shape character growth maybe, a handful of more beefy decisions that direct the narrative of the story, but currently, I’d say we have one of the… Read more »

Franky
Reply to  Erik B

I’m pretty sure Tim explicitly said at the very beginning of this storyline that there won’t be choices that lead to catastrophic events such as the death of major characters. Unfortunately all descriptions of comics older than the redesign a few years ago are gone.

I definitely did not say that.

What I likely said was that there would be no blind “you choose to turn a corner and now you fall off a cliff” sudden, unforeseeable deaths.

The death of major characters is always on the table.

I think maybe Franky was referring to an early adventure involving a character’s unfortunate introduction to fan blades, and that things like that might not happen again?

Tim has had a few… Rough patches to learn from. The internet won’t let him forget about them, but I personally never got the “joke”

I do want to just point out, for anyone remotely interested, that I believe this is the first time we’ve ever seen religion, other than the pogrom-style religion of the Dranglaex. I am not only intrigued, but happy that a sci-fi story shares it in a light that isn’t simply “religion is evil” or “religion gives you magic Jedi powers,” which seems to be the two extremes most stories swing to.

Ever read “Lost Fleet” series. Religion is on the back ground and every once a while the main character goes to pray Ancestors for quidance. Ancestral worship having become a thing as humanity started to spread to the stars, it is more spiritual than actual organized religion the only common thing being space burials but other than that no official religious heads. The other faiths are implied to still being a thing. But yeah it’s closer to this than the two extremes. As much as a rando on the internet can say, highly recomend. And if you get hooked there… Read more »