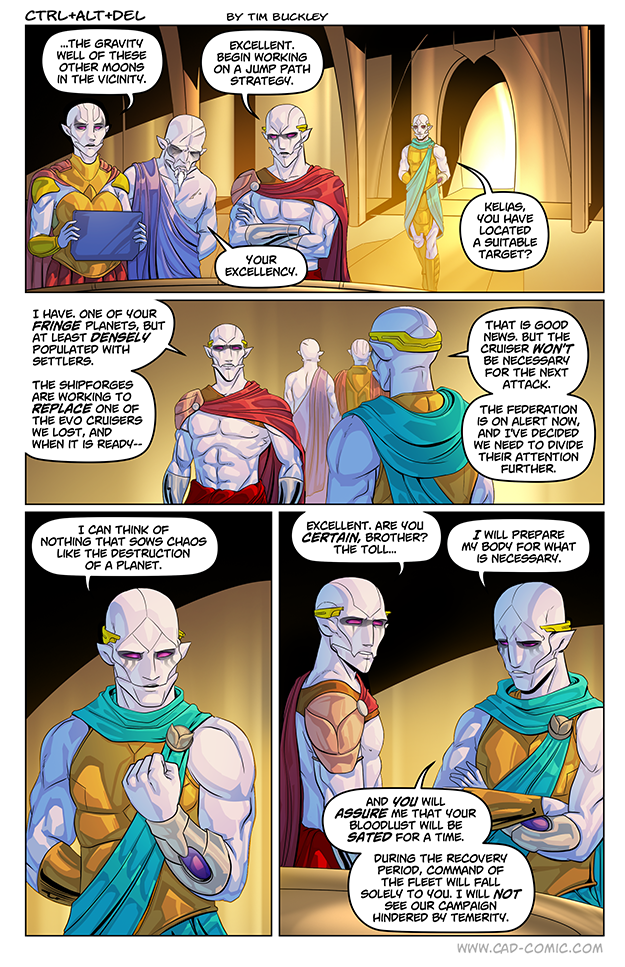 Community Notice: A Vote is live for Patreon Backers that will decide something VERY IMPORTANT for the Starcaster Chronicles. If you wish to be a part of this decision, you have only a few days. By all means, join us and help decide the future of the story. The vote can go either way, so your voice WOULD matter.

But how? I just joined with the 3$ monthy tier, I can filter and see one page from the next chapter with Quell and a guy with red hair, apparently posted 27th june. Thats it. In the feed some 1$ posts are visible but blurred. Load more does nothing.
Edit: Ooooh, I did wrong – joined the cad patreon, not the starcaster. Aw, well.

The Legacy
Reply to  Arcatus

Message Tim in Patreon; he may be able to help (or, at the very least, give you an alternate way to vote)

The Legacy
Reply to  BakaGrappler

.. after spending all that effort destroying a planet and exhausting himself, brother Starcaster is going to return to a hostile fleet, isn’t he?

Additionally could be an opportunity to take out an exhausted and weakened Starcaster weilder.

Yes, but he also knows the starcaster’s use comes with a cost. While he may want blood, who will HE trust to command while HE recovers if he murders his brother for the weapon? I think more needs to happen before we can say that fratricide is on the table.

what if fratricide is on the table, but in Cort/The Patrons hands?

Maybe Cort has choice to do what he does best: fast talk the brother into tipping the scales into chaos?

hmmmm…… What if the Starcaster only damages those who use it to destroy. What if when someone uses it to create new life it heals them and makes them stronger. ¯\_ (ツ)_/¯

I’m sure you noticed that Lance Major La’ni was using her Starcaster for space flight without suffering starburn. It doesn’t seem to be a skill issue either; Vectanix incurred incapacitating starburn when he cast a star beam.

I kinda doubt it. The Starcasters already heal their wielders automatically, with no magical power-ups involved. The damage they cause doesn’t seem like it’s directly related to the destruction, it’s just a natural side effect from channeling an immense amount of energy through a body not designed to handle that kind of pressure. On a meta level, I’d also consider it uncharacteristically poor writing if things went down that way completely. The strain on the user is a really nice drawback, it keeps Starcasters more interesting than just being completely unstoppable. It’d be rather weird/disappointing if that could be completely… Read more »

Huh….you know I think this is the calmest we’ve seen the red brother since his introduction. Literally, calm, collected and focused on his job rather than frothing at the mouth like a rabid dog.

Maybe every other time we’ve seen him so far he was hangry?

… Something something grab some nuts?

I get the impression that Kelias is a more complex character than his handful of previous scenes made him appear. He might covet the starcaster, but I think he probably also cares about Kelias.

Maybe the reason he wants to bum rush the core worlds is less about his bloodlust and more about winning the war before his brother succumbs to the toll the starcaster is taking on him.

You say that, but if the opportunity arose to do it without suspicion, I wouldn’t be surprised if he figured out a way to off his brother and become the new wielder.

Perhaps, but Vectanix is also handling the situation with his brother very adeptly. He doesn’t lord his position as a bearer of a Starcaster over his brother, and frequently acquiesces to his brother’s calls to act rather than continue waiting. And now he’s even about to leave his brother in sole command, showing him a high degree of trust despite their opposing natures. Being the twin without a Starcaster – the “lesser” twin – would naturally cause resentment in most cases, and there’s definitely some of that there, but for the most part, Vectanix treats Kelias as an equal, even… Read more »

Sounds like a situation where Cort could stir the pot!

Or so he can get his own starcaster from the federation, maybe

A good point. The fact that they can win a second starcaster is something to abate Kelias’s envy. There closeness to winning one, (or 2!) might be spurring him to impatience.

Also, If they do win a second, who could Kelias with it if he murders his own brother for his?

If Kelias wants a starcaster badly enough to commit fratricide, he’s going to have the opportunity real soon. I wonder if he might struggle with the thought of that.

I feel this shows some of the trust and concern the brothers have for each other that we haven’t seen before. Giving Kelias sole command of the fleet is an action that speaks louder than words. Kelias’s “are you sure” seems to override his bloodlust. It speaks to show how they’ve managed to work together for so long. I don’t think a betrayal is imminent.

well nice knowing him. hope scar is gentle plunging the knife in his back.