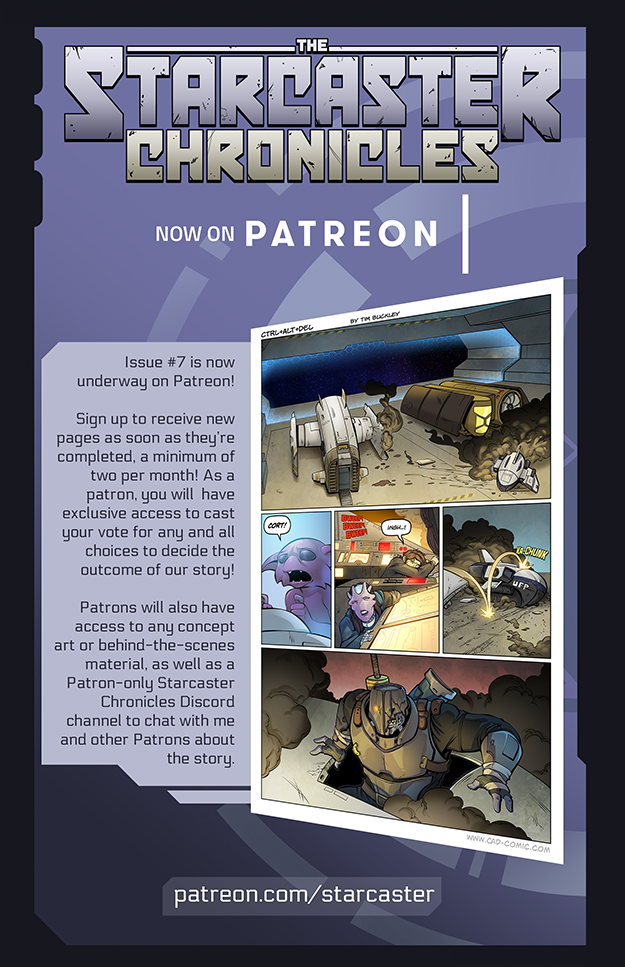 The Starcaster Chronicles Now On Patreon

TL;DR: The Starcaster Chronicles is now on Patreon. The first two pages of Issue #7 are immediately available, including the first vote of the issue!

I’ve been struggling for a long while with how to continue with the future of The Starcaster Chronicles. I outlined some of the issues in my vlog post last year, but basically it came down with trying to reconcile my desire to produce more (or at least more regularly) pages of Starcaster with the only way for me to achieve that (bringing on help).

For a while I toyed with the idea of handing things over to another artist, and simply acting as writer for the series, but even that proved incredibly difficult for me; I really enjoy The Starcaster Chronicles and I like having a hand in creating that world. Plus, I (and others voiced a similar opinion) liked the idea of having a continuity of art from issue to issue, and that’s not something I can guarantee with an outside artist that might not stick around.

There’s also the matter of cost; hiring help obviously costs money. I hired a colorist on the first five issues of Starcaster, and that helped, but I also paid that out of pocket. I’ve eaten that cost until I can (hopefully) recoup it when I put out the first Starcaster book. But since I’ve obviously yet to put out that book (working on it, I promise), I’m still in the red on Starcaster. So the idea of hiring help has to go hand in hand with finding a way to break even. That’s all I’m really concerned with. I’ll put the time and effort in to write and draw the series with no promise of compensation, I just don’t want to going into the negative to do so. There has to be some method of breaking even for me.

Which leads me to my next problem; The Starcaster Chronicles started free to read, and I want people that started reading it to be able to continue reading it, even if they can’t support it. I don’t want to rip it away six issues in and say “now that I have your interest, pay up!” That feels skeevy. So I need the support from people, but I don’t want to hold the pages hostage. What other leverage do I have?

Well, after much back and forth deliberation (for the better part of a year, actually), I think I’ve settled on something that I can be happy with. Patreon has been really good for Ctrl+Alt+Del so far, our primary Patreon Campaign is what keeps this site going, and what allows me to put out the volume of work that I already do. And they’ve added a lot of great tools  for publishers as well, so I think it can be good for The Starcaster Chronicles too.

I have now launched The Starcaster Chronicles Patreon.

The campaign is simple, there’s only one pledge level. For $2 a month, you will get a minimum of two pages of The Starcaster Chronicles.

I will continue to function as the writer of The Starcaster Chronicles, and I will continue to pencil the pages. The lineart is mine, which ensures a continuity of vision on the page. However I have now also hired an Inker and a Colorist to work with me on the series. Bringing in an inker and a colorist frees me up to focus more on the lineart itself and draw more pages.

I will produce 2 pages per month, regardless of how much support this Patreon gets. Hopefully, we can hit a break-even point on those two pages. If we get more support than that, our goals are set up so that every time we pass a threshold where I can pay the inker and colorist for an additional page, then another page will get added to everyone’s monthly pledge. The more people we have supporting us, the more pages you’ll get each month for the same pledge amount.

All of the proceeds from this Patreon are going towards inking and coloring fees; I am not taking any compensation for myself. My goal is to get as much Starcaster created as possible and as regularly as possible. That’s not to say that I don’t hope to make some money from my work, but I’m content to wait and see if I can do that on the back end (either from books sales down the line, or maybe some advertising income when I put completed issues on the website).

As a Patron, you will be the first to receive new pages of The Starcaster Chronicles, at a minimum of two per month, and have exclusive access to cast your vote for any and all choices to decide the outcome of our story!

The completed issues will still be posted to Ctrl+Alt+Del sometime after they are complete. However only Patrons will have the power to vote in realtime to influence how the story proceeds.

Patrons will also have access to any concept art or behind-the-scenes material, as well as a Patron-only Starcaster Chronicles Discord channel to chat with me and other Patrons about the story.

If you enjoy Cort and Speck’s adventures in The Starcaster Chronicles, and you would like to see more of it, your support on this Patreon campaign would be very much appreciated.

Ah bloody hell I’m going to have to get a Patreon account now (he complained after enjoying years of content free of charge).

For what it’s worth, I believe it’s mostly “set it and forget it.”

You’d get the comics right in your email inbox. You might have to pop over to the Patreon site (or mobile app) to vote in the polls, though 😉

I’ve never become a Patron yet, but I feel as though I probably should. This is the only web comic I’ve read for the past, well… 10+ years? If not more? Haha.

Just promise us that Cort won’t die after the second vote, no matter how stupidly we may vote =D

Your support would certainly be appreciated 🙂 However even just making sure you don’t adblock the site here helps us out.

Thank you for reminding me to turn adblock off! I recently switched to uBlock and had not unblocked your site yet.

The good news is, most of the ads on CAD are very unobtrusive. And on the rare occasion, a bad ad slips in, this site has one of the best ‘report bad ad’ tools I’ve seen. Keeps me comfortable in unblocking the site.

If you want any more material, I have a few small coffers worth of webcomics for you to read.
Gunnerkrigg Court, xkcd, Paranatural, Three Panel Soul, Cucumber Quest…
HELP I’M TRAPPED

I like that idea of Patrons being the only ones eligible to vote — that’s a neat perk that I don’t remember seeing elsewhere.

I’m actually fine with this. Sure, I won’t be able to vote on it, but even then, I wasn’t really active in that. Plus, this might actually keep the story more interesting because we won’t end up with all the random people showing up and spamming the obviously-stupid option just because they want to see the world burn. I’d support if I could, but I’m currently in a major save-up situation where I’m trying to get my funds together to upgrade my GPU and get some new case fans. It’s hell trying to game with a GTX 275, and it’s… Read more »

So what I’m hearing is: Patreon members get semi-regular Starcaster updates (precise timing will vary). Freeloaders still get Starcaster, but in one big burst much later on.
Alright, sounds good. Kudos!

Oh, my one request for this:
Even if patrons are the only ones who get to vote, if you do make a coherent base flowchart for the plot of the issue, if you could release that alongside the “free” iteration of the relevant Starcaster issue, that would be great.
Even if we can’t do anything, it’d be nice for everyone to have a chance to see where the story could have gone, even if it is barely a glimpse.

I don’t do flowcharts for these. They’re not neatly contained divergences and there are too many nuances to encapsulate in a simply node tree or chart. Each collection book, however, will include a section where I discuss each choice and what would have happened had the alternative been chosen.

How about at least show us what the choices are?

Instead of hiring a random inker and colorist, have you considered joining forces with another artist? Sohmer and Lar have been doing that for years and years.

Ryan hired Lar because he can’t draw a stick figure to save his life 😉 They’re a great team, but Ryan pays Lar just like I’m paying the artists I’m working with. They’ve been at it a long time, and become friends, but it started the same way. Nobody’s going to (or should) work for free, so “joining forces” with someone else isn’t much different than what I’m doing. 🙂 Additionally, I’ll point out that I think it’s easier for a writer who isn’t an artist to hire an artist, because you aren’t constantly looking at their work thinking about… Read more »

Could you give us a more in depth view of what inkers and colourists do? I am intrigued, but kind of just thought it was all one person and process that took black and white linework into colours.

ALSO: Starcaster is THE reason I am officially going to get patreon. I cannot be without this series knowing that it is available. Kudos, you get my money for something other than my coffee table weight.

I can show you, Erik 🙂 I made a gif showing the different stages. The pencils (me), the inks (Cole Brustad) the flats (Daniel Cruz) and the colors (Nicolas Chapuis).

Sweet, interesting look into the process!

Did you link your Discord account to your Patreon account? I think the invite is automatic from there.

Let’s not forget Lar is the third artist Sohmer hired. Lar does his own stuff as well, and it shows he has by far the better talent of the two. Sohmer often drops into writers block and drags his stories beyond Walking Dead depressing (that show sucks).

I voiced my concerns with the Patreon model in the comments section back when you posted the vlog post.
But I have to admit, that with the setup you outlined now (single tier patreon, min. 2 pages per month, completed issues posted to public with some delay), I think you have made the right decision.

Also, not having to check back every single day for votes when an issue is running actually works better for me now, since my life got a bit busier. 😀

“The completed issues will still be posted to Ctrl+Alt+Del sometime after they are complete.”
How long are we supposed to wait until they’re posted here? “Sometime” is a little vague.

making a choose your own comic behind a patreon pay wall? look I get that you have bills to pay and respect it but for a choose your own story that was free to read its a bit tool baggy. the players or their DnD story I get but starcaster is a wrong call

Since you think the choice has anything to do with “bills to pay”, it tells me you didn’t bother to read the post or the reasons behind the switch at all. The Starcaster Patreon is about finding a way to reliably and regularly produce pages of Starcaster. The money raised there goes towards paying the inker, flatter and colorist that work on the pages with me. I am paid nothing from the patronage for my work. You want the work to keep happening so you can keep reading it for free (which you still can), yet you complain about steps… Read more »