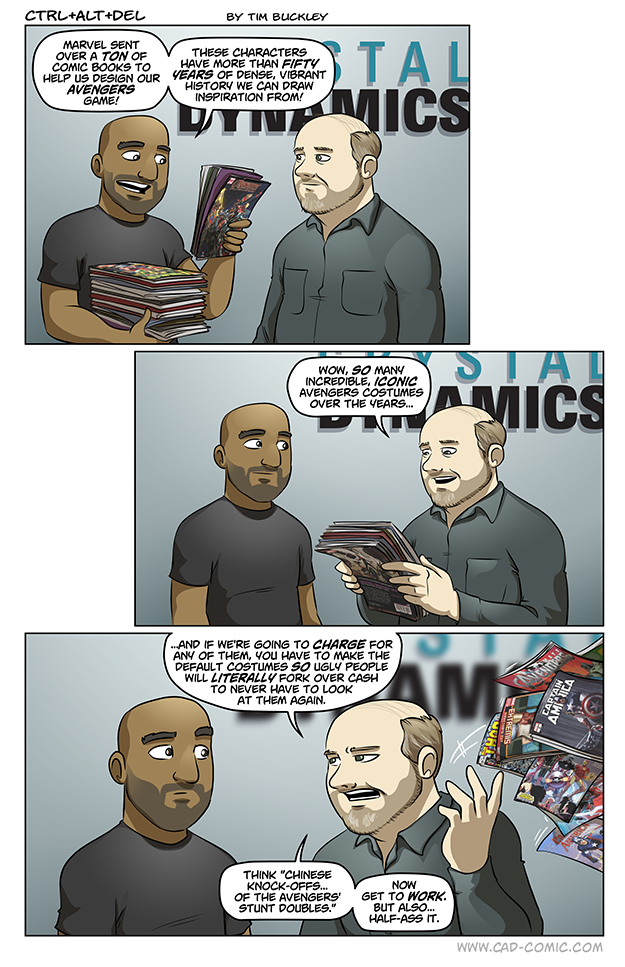 It doesn’t bother me a bit that the new Avengers game does not feature the MCU heroes (and that’s speaking as a massive fan of the MCU). Anyone who paid even the slightest bit of attention already knew that was not going to be the case way back when they first teased this game. Marvel Studios has spent ten years crafting a pretty tightly woven storyline, that doesn’t leave much space for untold stories. Some of Cap’s time in WW2 maybe, any of Thor or Black Widow’s earlier days I guess… but none once the band got together.

And I’d rather them not try to squeeze one in like “Oh, and inbetween Avengers and Age of Ultron, there was this whole other world-threatening event you never saw and they never mentioned!” I’d rather Marvel develop a Video Game universe and let that be its own thing. So I’m not super bummed that Cap doesn’t look like Chris Evans.

With that said… there’s still no excusing the lazy, hideous costumes some of the heroes are wearing. Cap’s weak-ass riot gear that totally fumbles the marriage between comic suit and reality that the MCU pulled off time and time again… Thor’s massive dinner-plate sized chest medals that feel more like the headlights of an old buick the longer I stare at them… Tony’s dollar-store toy version of the MK43 is probably the least offensive of the bunch, but they all just look… off to me. I like it when they try new things with heroes’ costumes, but these aren’t clicking.

As they’ve announced that A) They want to support this game long term and B) they’re not going to charge for new heroes/levels, that only leaves one real source of income for their microtransactions: cosmetic skins* (which they’ve confirmed will be in the game and I’m guessing we got a glimpse of in the trailer with the Starboost/Gemini Iron Man Armor).

*And let me also state that I have never had a problem with microtransactions are long as they are cosmetic only.

So I would not be AT ALL surprised to find that, via an in-game skin, we can actually get an outfit for Cap that looks like the MCU Strike Suit, or the Endgame scale mail, or a comic-classic suit.

They may just be sold separately, in which case the Eyesore Avengers up there may in fact be a shrewd business tactic.

I’ll admit I was having a really hard time with the new costumes as well. I was trying to honestly decide if it was because I’ve gotten. So accustomed to the MCU that now I see them that way by default. For example I don’t think I’ll ever not see Robert Downey Jr as Tony Stark. So when the trailer dropped, I was like ok it isn’t MCU. But yeah I don’t know Thor and Cap just look off somehow.

I know what you mean. It feels like all the characters were replaced by strangers. But you are supposed to treat them like you have known them for years when they are completely different characters in their own right. Somehow also creepy.

Yeah, it’s very interesting how you only can imagine R. D. Jr. as Iron Man, or Chris Evans as Cpt. America. Heck, I don’t want to imagine anyone else doing the Wolverine than Hugh Jackman. In contrast, there have been so many Hulk / Bruce Banner actors that I don’t really care about it that much, also I find Mark Ruffalo to be the best fitting one. And looking away from the MCU or Marvel in general, I completely don’t bother who’s playing Batman / Bruce Wayne. There have been so many actors now, that you’re used to see another… Read more »

They’d be better off making them look completely different rather than close but not quite.

I thought the entire thing was alpha or something. Those character models are just…bleh. Black Widow looks like a guy.

Huh, looking at the figures and the red ropes around the plane. I thought these were actors to ‘play’ the Avengers at some kind of air show or something.

Honestly, aside from Black Widow’s look I don’t really mind the default outfits, probably because I had already assumed this would be it’s own little canon verse as trying to jam it into MCU would be… something only EA would be dumb enough to do.

When your characters look less visually appealing than their LEGO counterparts you’ve done fucked up.

If they can’t even get something as basic as a costume to look decent it doesn’t actually inspire faith in anything else.

It’s not even the costumes that bothers me. It’s the terrible faces. And no not because they don’t look like the actors. We knew that wasn’t going to happen (most likely anyway). But they all just look…….blah and pudgy. I almost feel like if you took off Thor’s hair and beard and put on Black Widow’s, it’d be the same character. They just all don’t look good. Now. That said, if the gameplay is solid, I’ll likely get it. I just wish we were getting the masterpiece that was Spiderman, in an Avengers format. But we’ll see what more there… Read more »

Marvel Heroes very much used this tactic although they usually had decent but not overly popular costumes as the main free ones in game, damn that just makes me miss Marvel Heroes again. 🙁

In other news Cadence of Hyrule came out for switch. A rhythm game and more importantly a collaboration between Nintendo and an indie developer (brace your self games) loved it personally but if it’s not on your radar you should check it out!

Agreed, they are doing a spectacularly bad job on the characters for this. Luckily, it’s not my style of gaming, so I won’t be spending anything on it.

With that said, and sorry to be off-topic, but one of your ads is hijacking browsers, redirecting to a phony Microsoft page that says I have a virus. It actually spawned a download to my computer. (No, I didn’t accept it, or call them and a scan is already being run…) I took a screenshot if you want.

Other than Thor’s, I don’ really see anything wrong with these costumes. But then, I’ve never really cared much about such things, either.

Honestly? Since it’s cosmetic, it isn’t too big an issue for me. I might get annoyed by the trash looking heroes, but that’s a small gripe as long as the game itself isn’t locked behind many payments. If they’re going to be fair about their microtransactions, and make us pay for a costume to get a costume instead of tying it up with lootboxes, I really won’t mind.

At least they got Cap’s shoulder flag patch right.
In all, Tim’s article seems like a very astute observation. I can picture the design meetings going exactly like that. “No, these costumes are bad, but not bad enough…put them in a discounted starter pack and try again.”

If you offer cosmetics as microtransactions because you’ve come up with some good alternate looks, that’s a shrewd business tactic.

If you deliberately go out of your way to make characters look like ass, and save the actually good looks as microtransactions, that’s why we have the government wanting to get involved with video games these days.

I guess I’m the broken one who actually likes them

I dunno, perhaps they’ll grow on me. I loved Spidey’s white spider from the PS4 game, but I know a lot of people had a very negative reaction to it at first and came to like it later.

These just seem like rough drafts rather than finished products to me.

Good point. Spider-Man PS4 looked amazing. The characters didn’t look ripped from MCU, but they looked epic all the same. What Avengers has up there looks ripped from alpha gameplay where they’re not finished with the models.

I don’t like the excuse of “microtransactions are fine if it’s cosmetic only”. It’s still scummy and locking a fun aspect of games: LOOKING COOL, away from people that don’t want to drop thousands of dollars across however many games they’re playing with that shit

If it’s cosmetic, if it in no way affects your ability to play the game, then it is 100% player choice to purchase (as opposed to things that make you feel like you can’t play as well or experience all the content unless you buy). If they’re going to support the game post launch with new heroes and new missions, and those are free to download, the developer deserves to be compensated for that and cosmetic microtransactions are the LEAST intrusive way to do so.

I totally agree, the cost of a AAA game hasn’t gone up anywhere near the amount that other luxuries have in my country. The fact I can pick up the latest installment of Call Of Doody for about the same price I could 10 years ago blows my mind when I expect a far more advanced product than I did back when MW2 came out. If game companies want to charge for cosmetic only items (I am aware that this is not how Call of Duty does things) then I’m all for it. When I was 18 I couldn’t afford… Read more »

I’m more concerned by that black widow look. I’d swear thats a guy in a wig and fake tits. When your female character model looks less feminine than your average M>F trannie you might need to go back to the drawing board. That is unless they actually intend to make BW a trannie, in that case the look might work but I’d bet fans would be upset for that instead.

Avengers: Made In China.

Pretty much my reaction too. There’s plenty of good reasons they can’t/choose not to use the MCU likenesses. But they don’t look much like the comic versions either. It’s like a bunch of mediocre Marvel cosplayers suddenly got the Avengers’ powers.

IMO the faces aren’t great either. It’s like I picked the same Face 3 preset from Mass effect and tried to make the entire cast with it.

Nah, if the game has microtransactions for ANYTHING related to anything other than traditional (think FNV’s add ons, the Witcher 3, etc) DLC Im not down for anymore. I am sick and tired of the games not having any cosmetics anymore unless I buy them. Aside from Cyberpunk 2077, theres probably no future game purchases for me in the future. Honestly, Im sick of it. Warhammer 40k looks more and more attractive every day.

I literally see no problem with their default appearance, personally. The only one that’s really bugging me is Black Widow.

Besides that, it’s quite possible that these are just beta outfits, and, seeing the uproar from the internet, they’ll re-model them and improve upon things like the Sonic movie.

I got the game’s trailer as an ad for a Youtube video, and I have to say, the game looked REALLY fun. especially with the Captain America and Thor parts, or who knows. Maybe I’ve just been playing too much Destiny 2. Anyway, the sudden shock of, “HOLY CRAP AN AVENGERS GAME WANT WANT WANT” was enough to overpower the though of, “Wow, those costumes suck.” But now that the initial layer of hype is over, it isn’t enough to cover it up. And Thor in this game may not be modeled after Chris Hemsworth, and DEFINETLY not his costume,… Read more »