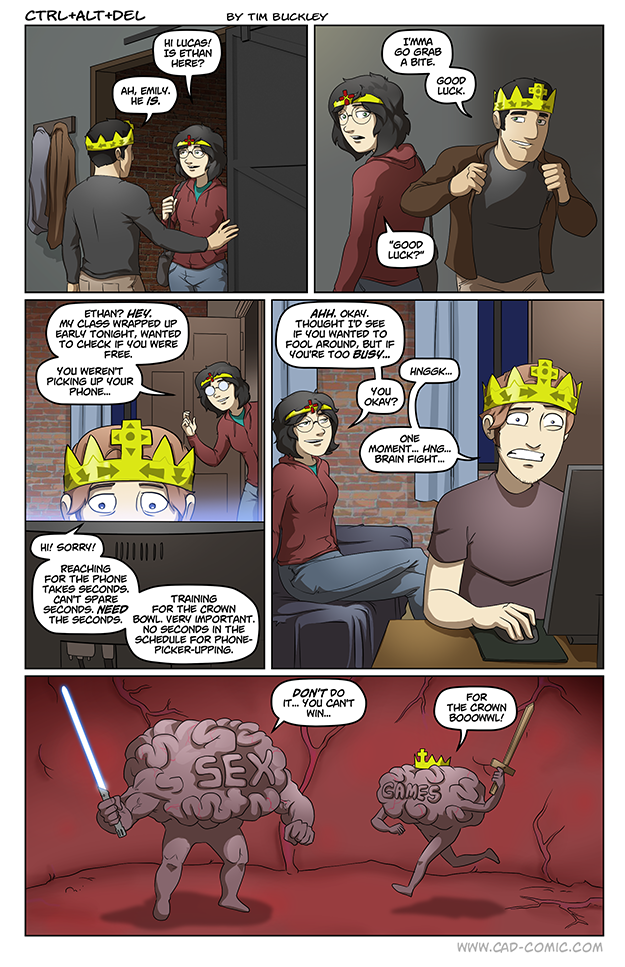 I played the Resident Evil 2 demo this weekend. I dig it. It’s been so long since I played the original, I feel like I barely remember it, but the remake does seem like it’s going to do a bit of its own thing as well. Looking forward to playing it later this month.

It also reminded me that I never played Resident Evil 7. I wanted to, but I heard such good things about it in VR, that I thought I’d wait to see if it came to my Oculus. Doesn’t seem like that’s likely, so I decided to just sit down and play it. You can catch the first couple hours here, and I’ll be on tonight streaming a bit more. It’s basically a lot of this:

I must say I’m a little disappointed in Ethan …

Go Games! You can do it!

Ah, so many battles lost by the game drive in my youth… 😀

What, a lightsaber without the high ground? I’m disappointed in you.

Sex is clearly taller than games and therefore automatically has the high ground.

Agreed, I was expecting to see it on a little hill doing the high ground quote lol ^^

Also its a lightsaber vs a wooden sword.

It’s over, Brainakin! I have the high ground!

The Schaef
Reply to  Lt. Kettch

Nobody went for “Amygdala”, for the alliteration?

Ah yes, the ole forget games let’s have sex trick. Works on me every time.

The RE2 demo reminded me of RE4… which is a good thing.

They try not to overuse it.

In case anyone doesn’t get the reference, it’s this and the following comic: https://cad-comic.com/comic/entranced/

I actually searched for that page, but didn’t remember which year it was.

But this Ethan seems to be easier distracted than the old one, because Emily hasn’t even opened her hoodie yet.

Ethan, I’m so disappointed in you. You have to decide between sitting at your desk playing a game, and fooling around with your girlfriend?

This is what a hybrid console was MADE for. Go grab your Switch and multitask.

Can’t help feeling this should have been framed the same as the Anikin Obiwan fight from episode 3, with the game brain not having the high ground.

That’s exactly how it was framed.

…and apparently I was both wrong *and* late to the party. Fair penance for being a slow typist on mobile, I suppose, but a good old-fashioned qwerty will always be my first love.

I got a kick out of writing it anyhow, and sometimes life is about the journey.

The rAt
Reply to  Staris

I think that was the intended reference, though mayhaps* it might have been a bit more clear.

I suspect, with the almighty power of the mouse and his army of copyright lawyers backing Star Wars, that while parody is indeed protected under copyright law, Mr. Buckley may have opted the safe route of changing the dialogue just enough to make the reference, while still avoiding unholy gaze of said soulless host of attorneys.

This is, of course, just my own colorful speculation.

Vukodlak
Reply to  The rAt

Its just meant to be a completely one sided fight. Sex is bigger stronger and armed with a lightsaber.
Crown Bowl has a wooden sword.

Author
Tim
Reply to  The rAt

I love a good meme as much as the next guy, but not EVERYTHING has to use a meme. Of course I saw that similarity as a possible direction when I was drawing the comic. I decided not to go that way. Perhaps my mistake was not then purposely altering my script to avoid the comparison. Lightsabers are my default “trumps everything else” weapon, and this was supposed to be a nigh unwinnable fight. Clearly I landed in the middle here whereas perhaps I should have gone fully to one direction (embrace the meme or go nowhere near it). Maybe… Read more »

I feel it worked well, as the smaller brain has what appears to be a wooden sword.

I got more of a David / Goliath vibe on it, but David was much more prepared. Games doesn’t stand a chance.

That makes sense. In many ways, I feel like the Meme has become the macro equivalent to an inside joke. While I love a good inside joke, the way they rely entirely upon pre-existing context, there’s often no real thought; you’re either part of the in-group and get it or you’re not and you don’t. Not all humor should make you think to get the joke, but it’s also nice to have some that does. Or at least that’s my two cents. However, if you’re thinking of changes for the sake of clarity, maybe it’s as simple as changing the… Read more »

Don’t try to guess what the comment posters are going to assume about anything. All nuts.

Your message comes through clearly, no need to change anything. While a battleaxe would certainly seem way more badass than a wooden toy sword, nothing trumps a lightsaber.

I feel like Sex should have been wielding The Penetrator from Saints Row 4.

I don’t think Ethan has even defined me so well in my entire life.

Don’t know about Ethan specifically, but let’s be honest, the idea that for men the lust for sex will overpower everything else is just a silly myth. Same for bacon lol.

ok…why was the decision made to omit Emily’s eyes in the 3rd frame? Is it supposed to be the slight from the screen reflecting off the lenses? But if that were the case, it’s not like that in the 4th frame.

Emily is seriously ridiculously cute. Does anyone else hear Velma’s voice when reading her lines?

Sex: It’s over. I have the high ground

Games: You underestimate my power!

Nobody will ask about the female version of the Winter-een-mas crown?????!