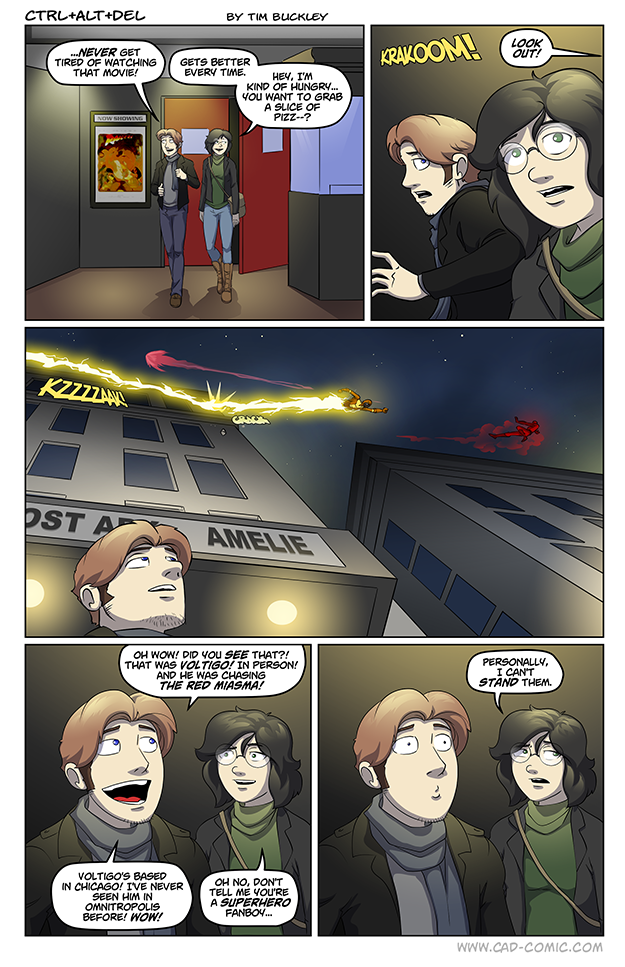 A Difference Of Opinion, p1

“After that asshole got someone killed not that long ago, I’ve just felt they should all be outlawed”

“I mean, I know my brother was kind of insane, but he didn’t deserve to die!”
*starts twitching from both eyes*

That would be hilarious.

Not the conflict I was expecting. But it is a very valid thing about superheros… they are messy and inefficient. Or, yanno, dangerous and irresponsible. Issues range from “we JUST got the hole in main street fixed!” to “My car insurance doesn’t cover acts of superhero, so when my car got thrown at a villain… uh… that’s my livelihood gone.” to “If someone would just kill the Joker, it’d save about a thousand lives a year.” At best, a town with active supers is living on a volcano. I’d suppose a lot of her opinion on this would be from… Read more »

oh yay another trump is the reason for blank post. so unique you are.

In the defense of Lucas and Ethan, they don’t seem to cause much collateral when on patrol.
Maybe in this universe, superheroes are actually responsible?

Did you just use “Ethan” and “responsible” in the same sentence? 😉

Erik B
Reply to  Kinsai

No, he didn’t. They are in two different sentences.

I mean… just looking at the page, villains got an energy blast flying off to who knows where. Hero has a *crack* sound effect and debris falling just from chasing after the guy, and has presumably been doing so the entire trip of Chicago->Omni. It looks like a relatively small amount of damage, but chipping away at everything he… bounces off of…? as he goes is going to be in the tens of thousands to repair from the “footprints” alone with a cities worth of distance.

Pretty sure we can rule out responsible/safe supers already.

Silly question, to the whole Superheroes are bad thing cause the damage they cause… how much damage do the villains they fight cause when there are no superheroes to stop them?

Depends on the super villains goals, I presume. Take your “typical” scenario for the genre that the villain is stealing. Say, robbing a bank in a populated area. Superhero shows up, super brawl right there in the living area. Even a relatively medium-powered super brawl is going to cost millions in city damage, whereas a bank would never have that much cash on hand. A quick google suggests even large banks only tend to have $200,000 cash in their vault. In this scenario, I’d say fuck off with the superfight. Have him followed, be it by helicopter camera, super, or… Read more »

I mean, most countries would still lock them up. The vast majority of countries don’t have capital punishment anymore. Like, they won’t even execute terrorists. I can’t imagine that they’d bring it back for superpowers

It’s a matter of need. The shift from capital punishment to box-for-life is as much a matter of being able to afford to do so as it is a moral shift. If your powers make it impossible, or even just outrageously difficult, to contain you? Even Norway would have to execute you. A prison that can’t hold you is no prison at all.

That’s the same problem SCP universe has. The difference is in the budget and not being undercover.

Look at grrlpower.com
A superhero comic where they are a military force, including discussing things like superhero insurance.

I was thinking about that too, more specifically, https://grrlpowercomic.com/archives/comic/grrl-power-193-wont-somebody-think-of-the-exploding-children/ and the next

And there’s the nail in the coffin.

Ah, here we go, this is the deal breaker.

Oof. I felt that from here. I figured something would happen that would bring Ethan and Lilah together.

yeah … but I personally kinda hoped for a car crash or cancer….

So you were hoping he’d fridge her? That’s not a better solution.

Let me just grab some popcorn

well she might have as well said “Fortnite is better than Apex”… KKTHXBAI.

“Yeah, after that one ‘Hero’ that dropped my brother off a building…”

I am going to LOVE this storyline. 😀

Bah, Peter Parker lived with Aunt May who hated Spider-Man for years in the original comics.

She even tried to kill him once, not knowing it was her nephew.

As long as she doesn’t know, it’s technically possible to make it work. Difficult, but possible.

Yeah, it pretty much all comes down how Ethan handles this.

lol we all know how Ethan handles stuff ^^’

Well done Tim. I do not think anyone forsaw something like this, this is going to be good. Can already tell.

So is it the fanboys that she cannot stand or the heroes/villians themselves?

It could be she cannot stand the heroes because she is actually a villian or other evil-doer?

ShonaSoF
Reply to  The Dude

That would be an interesting direction.

Ya personally I always get annoyed when we see a super villain do something like robbing a bank/holding the city hostage. When they could earn the same amount of money by working in the private sector without the threat of getting their ass kicked. Hell they could hire themselfs out as private bodyguards/transportation services and still earn a preety penny

But that requires actual work that they have to do that someone else has control over. Plus the annoyance of things like taxes and schedules. Performance reviews. annoying coworkers that you can’t throw off a building.

Then some supervillains will just be thrill seekers where it’s more about the risk than the money.

Why would anyone like superheroes in the real world though? They would be nearly 100% hated. The Incredible’s had this pretty correct really except that the average Joe would have Syndrome or Screenslaver attitude, without the superpowers of their own. Honesty if Syndrome had stuck to his eventual plan (make everyone super so that no one is) without needing to be a super himself – he’d be the good guy of that story.

I would say, yes, I would, and I’m sure a lot of other people would too. Even in a world of normal humans, we have people we perceive as superhuman in their skill levels that we revere as heroes for the good deeds they commit. And they have failings and frailties just like their fictional, superpowered counterparts. Firefighters, Police, EMTs, Disaster Recovery Personnel, even just every day people doing extraordinary things. How are superheros any different than that? They are taking an ability or skill they have over other people and trying to use it for good.

You’re looking at this from a fantasy world perspective. I love Batman in the comics and movies. If he was real he’d be a serial killer I’d want jailed. The firefighters and police don’t have skills and abilities no one else can have, They also have checks and balances and serve at the consent of the people. The web serial Worm had the best take on this.

I guess now we get to hear/see the other side of the public that dislikes heroes or sees them as an additional danger to Villains or who want all Supers to be Supercops aka names and faces known so that they can be controlled and hold responsible for their actions.

From the start of this relationship, every time I’ve seen this girl it was a frantic search for the dealbreaker.

I’ve been trying to like this chick for the longest. Like REALLY tried. But it always seems like every other thing she says is just detracting. Maybe she has a good reason, maybe not, but either way this is not helping. Personally, if I was in Ethan’s shoes, I’d have let the relationship go: Too many differences and hung up on another girl is not helping anybody. He most likely will still find a way to make it work, but….eesh

Yeah, I don’t know if it’s because I’m firmly in the Ethan/Lilah forever camp or what, but I never took to Emily from the start. I figured she would be revealed as being a super villain that would end their relationship, but this has got to be the thing that does it.

I suspected Emily may actually be a super, which may be the case if she can’t stand fanboys, but…
Seems unlikely now.

Dump her already, Ethan! She’s not worthy of your genius!

That one piece of rock is going to hit ethan in the head and uncloset his superpower infront of her. that would be awkward.

That would make for a very interesting plot twist.

What movie did they see?