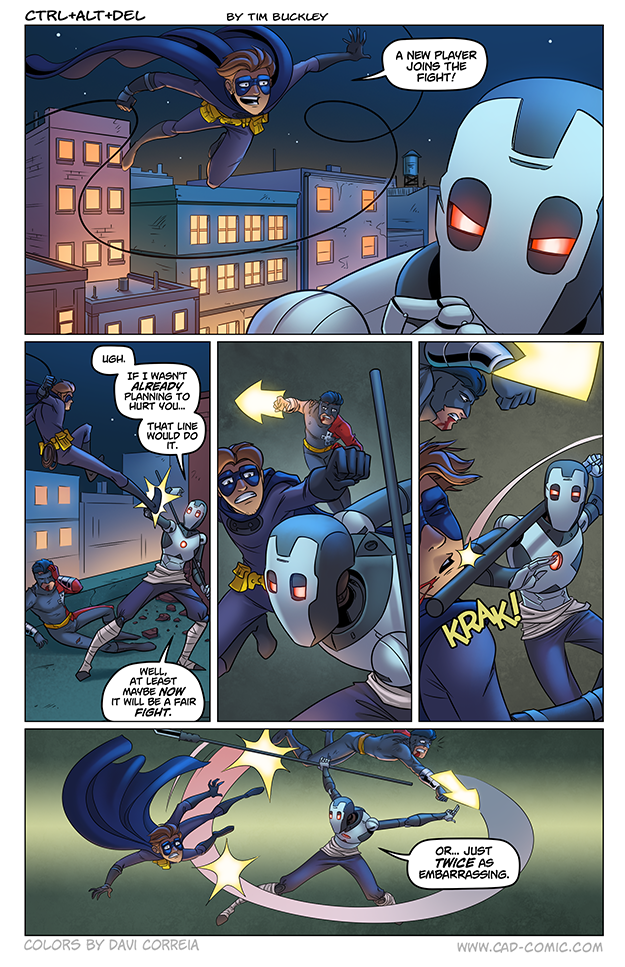 SUMO just dropped me a special coupon for 20% off in their store, just for me to pass along to you. Nobody else has this code, and it’s the best deal available on their site right now.

Code CADCOMIC will grab you 20% in savings on an awesome new gaming/movie/lounging chair.

And crazier than that, SUMO is now offering… and I can’t believe I’m about to say this… yoga balls. Seriously.

Now, they’re saying that’s a yoga ball. But between you and me, that looks like something I want to have in my house to hurl at people when I want to get their attention, but don’t want to risk causing permanent damage. Or something I could fill a room with to create a giant, adult Chuck-E-Cheese ball pit. Or maybe it’s adult Tribble, I dunno.

They’ve also got rugs now. Because after you’ve SUMO’d everything else, all that’s left is to SUMO your floor. After all, don’t your feet deserve love too?

Two vs. 1 means nothing when one of them is as weak as metal waffles and the other is already bloodied.

Might be just me but I think metal waffles are of the more sturdy waffle variant. Now had you said paper waffles or foam waffles or even biodegradable recycled plastic waffles then this remark would have made alot more sense.

Also, it is still 2017 (year of the butthurt) so I would like to point out that no offense towards the waffle community was intended when composing (and thereafter posting) this post. Thank you very much.

The Waffle Community
Reply to  Zuuhl

Thank you mister Zuuhl,
This post is meant to let you know that we have no taken any offence by your post!

Zuuhl
Reply to  The Waffle Community

OMFG!! DID YOU JUST ASSUME MY GENDER?!

Although I was born a man, who says I don’t identify as an apache or even… a waffle for that matter?!

George, from The Waffle Community
Reply to  Zuuhl

Hah! You do not have what it takes to be a waffle!

The Snowflake Community
Reply to  Zuuhl

We welcome you with open arms

THERE IS NO WAFFLE ONLY ZUUHL.

There is no male or female… only…
FUCK, Eldest Gruff beat me to the joke.

After the first encounter with these ninja-robots, you’d have thought Ethan would have installed an electromagnet in one of his controllerangs or something. Improved accuracy, PLUS wipe the hard drive or cause the system to malfunction!

What are the chances that this Zeke has Windows installed, and will need to abruptly save and close while doing a system update?

I’m wondering a bit more about this mysterious creator. I have a feeling that the creator will have something to do with Ethan… I mean, after all, he created the first Zeke in the original universe.

No, think. Who’s the other antagonist of the original comic? Not Zeke, not Scott – someone who’s had it out for our heroes, and could possibly easily afford the equipment we’re seeing here?

BARR-
Wait, no.
Christian.
The Coalition of Religions (remember that Church of Gaming?)
Bioware.
Those idiots who sent Josh.
Rupert.

It’s definitely going to be Christian!

Not Bioware. Not Scott. And not the Troll.
EA.
It’s been EA this whole dang time.

Richard Weatherfield
Reply to  Him.

PLAYER 2 HAS ENTERED THE GAME!

Is it just me, or does panel 2 contain a lot of talking for what is probably covering a very brief timespan?

Him.
Reply to  Chris

Zeke is capable of bullet-timing himself, but only when talking about things that he doesn’t care about much.