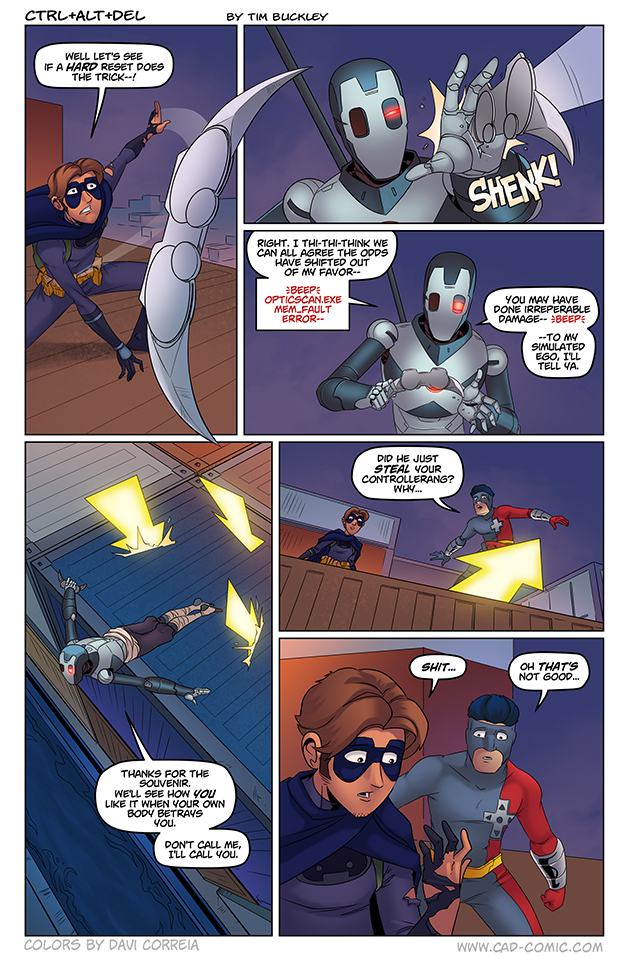 Thanks for being the first to point this out – it’s obvious in retrospect, but I didn’t get it immediately.

Do you really think they would survive the ocean water though?

Thats why a good hero sprays there fingers with liquid latex

Blood? I think its blood, are we already at the “Evil Clone” phase of the comic book?

I think it’s more that he can now find out who he really is and attack ethan at his home or store or his family.

at home, ok …they still have superpowers there as well and analog is immortal, shop thats worse as their non superpowered tech provider is there alongside customers, last …what family?

Well we don’t know for sure (or do we? I havn’t kept up that good) if they have familys, maybe he can somehow using the blood find them?
And yeah I guess he is immortal, but if the robot attacks him at home while he is civilian, it means that people could find out who he really is if he dies and then respawns.

All we know is that Scott has someone he cares about and Ethan’s sister Rory/Carrie died.

Fingerprints only work if they are in a database. unless he works in a children’s hospital, applied for a firearms license or has been arrested his fingerprints won’t be in any database. And just by holding it he’s going to smudge the fingerprints. So Blood and Evil clone, would be a much better guess. but there’s no blood on either side of it. the question is would an evil clone have the same abilities ? Guessing he already has D-pad’s DNA, from the last fight. so would this be two different clones, or a clone army ? or would he… Read more »

This is Ethan we’re talking about… he’s probably been arrested at least a few times.

Kuraimizu · A human being with skin oils galore would quickly smudge fingerprints beyond usability. But a robot, especially if he is careful where he holds the thing, could well scan and store usable prints. If the EMP jadn’t affected him so deeply, he wouldn’t even need to keep the Controllerang – a quick (computer-speed) optical scan and he has the prints. He is probably only keeping the weapon in order to inform Ethan of his mistake, and of the threat. And possibly as insurance against his damaged code losing the optical scan of the prints…

Haha, you were right.
Breakfast, p6.

I’m guessing it has something to do with Ethan’s DNA?

Quotations man.
I knew about that, I just was referencing the first time it happened.

The “previous” button doesn’t seem to work for me.

So… Ethan and Zeke shares injuries it seems?
Ethan threw his controllerang in Zekes left palm and made a large cut.
Ethan then proceeds to stare in shock at his own left palm.
Queue dramatic subwoofer *brrwaaaam* a-la Inception.

They are quantum linked! One is the robot version of the human version.
Once one stops being human it “dies” and turns into a robot, and at the same time the other turns into a human.
*puts on tinfoil hat*

His glove was cut after firing off the emp. Pretty sure the reaction is because his fingerprints are on that thing since his glove was broken.

Your theory is more fun.

I also like this theory. Then again, if that were the case I’d expect Ethan to react in pain.

“There are no finger prints down under water…”

The Schaef
Reply to  mandoschMUh

Thank you for bringing Dethklok back to the forefront of my referential context. You have just made my entire week.

I guess that means he’s taking the controllerang back to his boss, Dr. Ninmiltrid Fmiltindryden.

Tim the back Previous and Next buttons are not working currently.

When can we assume direct control?

I’m gonna throw my hat in the ring with the theory that he’ll reverse-engineer a way to temporarily block superhero powers, using DNA from Ethan’s skin cells left behind on that controllerang. He’ll also use the fingerprints to get location information on where best to strike, and he’ll deploy his anti-super weapon right there and attack.

Obviously, with Lucas’ power inhibited, he won’t be able to use his directional arrows against Zeke, and Ethan can’t respawn. I would guess it’s temporary, obviously, but maybe Ethan gets a look at just how many ‘lives’ he has left.

It is presumably fingerprints, though your idea is more fun.
If hellish to write and draw.

Never realized before that Ethan was ambidexterous. He’s clearly using the left to throw, but used the right to eat Chinese food with chopsticks back in June. He’s also used both in grappling and swinging.

Mm, I’m thinking that might not be the case. You can train yourself to do certain activities with your off-hand as well as your dominant hand. It’s seen often enough in athletes, where it would give an edge. We know that Ethan and Lucas extensively train, and even though Ethan’s life is never at stake, one mistake might mean that the lives of either Lucas or civilians are. As Ethan’s mobility and offensive capability are all connected to how well he aims, fires, and throws, training himself to be ambisinistral would be a smart move.

Ethan is right hand dominant, but those controllerangs are located in a pouch on his right hip (see issue 1, page 12) and sometimes it’s easier just to hurl them with his left hand if he’s moving quickly.

You’d really be surprised Eldest one about how selective ambidexterity can be. I am left hand dominant for most things, writing, shooting, fishing, throwing and batting, but i’m a righty when it comes to culinary stuff, or playing music.

He’s jumping into water, any fingerprints or DNA will get washed away.

Not entirely true. Fingerprints are left by oils on the skin, and it is possible for fingerprints/DNA to survive contact with water. The longer its submerged, the greater the chance of damaging the print/rubbing off, but it’s not impossible to pull prints from wet items.

I’m aware it’s a comic BUT, the second that controllerang hits the water all fingerprint evidence would disappear.

Do a little research: there’s plenty of ways to lift prints off of wet surfaces. Water doesn’t wash away oil, at least not immediately.

Fingerprints would wash out in the water..

“Don’t call me, I’ll call you”
Of course he is going to try and identify Ethan through fingerprint/DNA, and come around knocking.

If the mastermind has the tech to make an army of ninja robots, with a high degree of precision with remote control…

He PROBABLY has the tech to find out Ethan AND Lucas’s face from video. Because lets face it – An eye mask isn’t hiding your identity from anything with today’s tech, and Lucas’s “disguise” is hardly better at it. Hair exposed? Chin/Cheek/Mouth exposed? Eyes exposed? Not tricky to determine your exact facial features with all that.

In most comics heros and villans are stupid when they have to recognize superheroes and there identities. Clark Kent only change besides his costume is wearing glasses and most people doesn’t know he is Superman. Wonder Woman only wears a Tiara In case of Anime Sailor Moon and the Sailor Scouts don’t cover there faces (only wearing tiaras), and nobody recognize them (only if the person see them transforming). I think, we would recognize Captain Prime for example, when she is showed in civilian clothes (because her face is only covered by those yellow glasses, but Ethan, Lucas and Scott… Read more »

Hmm, if this is finger prints or blood they must not know how either works. 1) Blood would never survive a dip in the ocean, the salt water is one step from bleach. 2) Fingerprint identification would mean he was in a data base somewhere, “in other words he got booked for a crime.” Would require a full set, “it looks like only a couple of his gloves fingers are torn,” and even then perfect matches aren’t really a thing. That’s TV drama. 3) As other’s have mentioned, facial recognition software wouldn’t even be slowed down by that eye mask… Read more »

He’s a Cyborg. Sure to have a handy compartment or storage unit in his abdomen or or maybe right leg similar to Robocop. Thus preserving any blood or prints.

Another worry is could also use the blood to reverse engineer Ethan’s powers and duplicate the effects on himself or his master could.