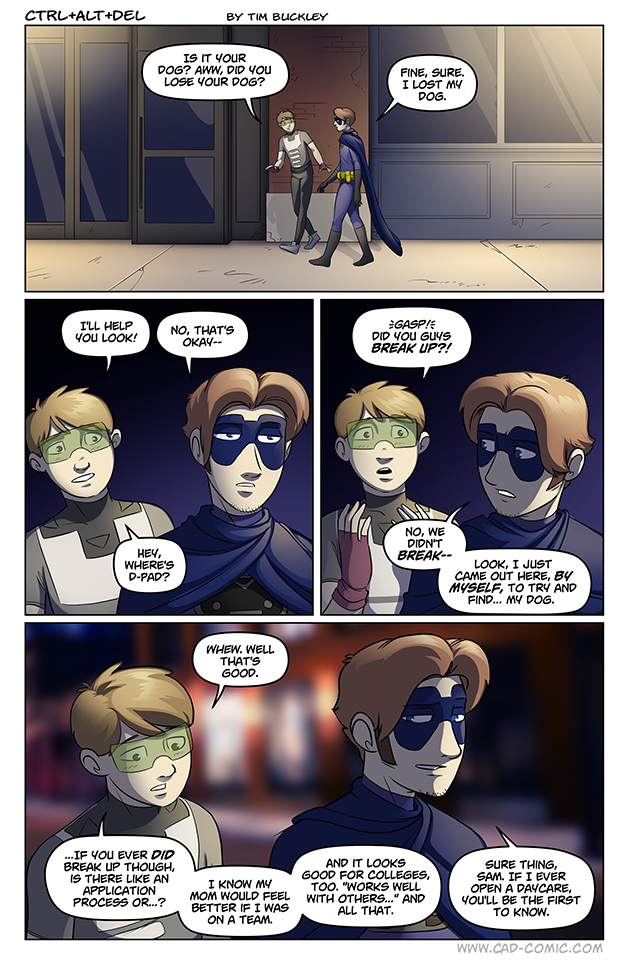 Who is this guy anyway, what’s his deal

and now i’m curious if emily is ever seen again…

no thanks nintendo
Reply to  jack

Once, when she had to deliver another package to the store.

Check Demolition-chapter. Sam’s first appearance is in there.

turf happened roughly a month prior to that

14 year old super hero who’s doing it for college credits in his local neighborhood. He has the ability to “pause” things he touches. I dont know the limitations on his powers, but he appears to be able to undo it at will. He calls himself gameboy, and manages to push Ethan’s buttons very hard.

Tim should start leaving those notes they sometimes have in comics
“For info on Sam see: [Issue]”

why, he has the comments that do it for him.

I wonder how a meeting between Sam and ZK would go. Sure, ZK has seen plenty of betrayal and abuse from certain humans, but this puppy of a person might just provide a somewhat new perspective.

That Other Guy
Reply to  GUNnibal

I think we’re unfortunately going to find out. The chapter title is bite and now they’re referring to Zeke as a dog. Up until now the only ones Zeke has hurt have been Ethan and Lucas. Now they’re going to have to decide what to do when their ‘dog’ finally bites someone.

Last edited 1 month ago by That Other Guy
12
Reply

GeorgeV
Reply to  That Other Guy

Let’s not abandon all hope yet. Signs are indeed bad, but there’s still some possibility title could refer to ‘bark worse than his bite’ in the dog metaphors.

Or, it could be relating Zeke to a dog that has bitten someone, past-tense, but Ethan was trying to rehabilitate. The comparison is apt, as it’s not uncommon for a dog who is a danger to others and has bitten on many occasions, to be ordered to be put down by a court.

Mr_Meng
Reply to  That Other Guy

I think a lot of people have forgotten how much Zeke enjoyed hurting people before Ethan and Lucas tried to redeem him. Now being in a position where he could feel like he was betrayed by them could cause him to do some real damage to people who aren’t as durable or come back like Ethan.

Late to the party
Reply to  GUNnibal

You’re missing the setup for their meeting. “This is Zeke? I thought you said he was your pet?“
Instant loss of trust.

no thanks nintendo
Reply to  GUNnibal

ZK’s also probably still broken, so I wouldn’t have a ton of confidence in Sam having any luck.

Honestly, I get his frustration with him feeling the theft of the gaming hero moniker… but its a good opportunity for both of them to work together… especially if his motivation is to protect others. It’s beyond reckless for this kid to be doing this alone, and he is basically asking for help.

When I went back to read Sam’s original appearance, someone in the comments mentions that Elan should consider forming a gaming based avengers type team, and that would kinda be awesome. Find Zeke and make up with him, and we’re up to 4 members :3

Don’t forget that vandal due who was kind of on Ethan’s side as well.

I don’t see this ending well at all. Poor Sam.

really excited for the next one!

I like Sam. Please don’t kill him. Also, can his hero name be “Save Point”?

He already has a hero name (see page Beetle linked somewhere above in comments), but perhaps if he ever gets tired of calling himself The Gameboy.

Not just the ability to stay dead… but that, when he dies, he “wakes up” in his body five minutes prior to death, with all his memories, able to make changes. That’d be Save Point.

Incredibly powerful in most situations. Though with an obvious weakness – that if he’s trapped somewhere that he can’t change the outcome, and can’t force an early death (to, say, keep going back five extra minutes) he’s stuck in an infinite time loop.

Late to the party
Reply to  Eldest Gruff

Now I’m trying to picture how Lucas could have an upgraded ability. Maybe combo directional moves, that shoot additional arrows out of the original arrow in the input he made before shooting it out? Possible backlash could be an enemy deflecting the arrow and the followup arrow shoots out in an unintended direction, possibly back at him or allies.

If Zeke were to kill Sam after him finding the “dog” before Ethan does, oh boy…

Is Zeke armed with any projectile weapon (I think he had one, but it’s possible Scott removed it, or at least its ammunition)? What I’m thinking is, Sam might be able to pause him, if Zeke tries harming him and has to resort to melee combat.