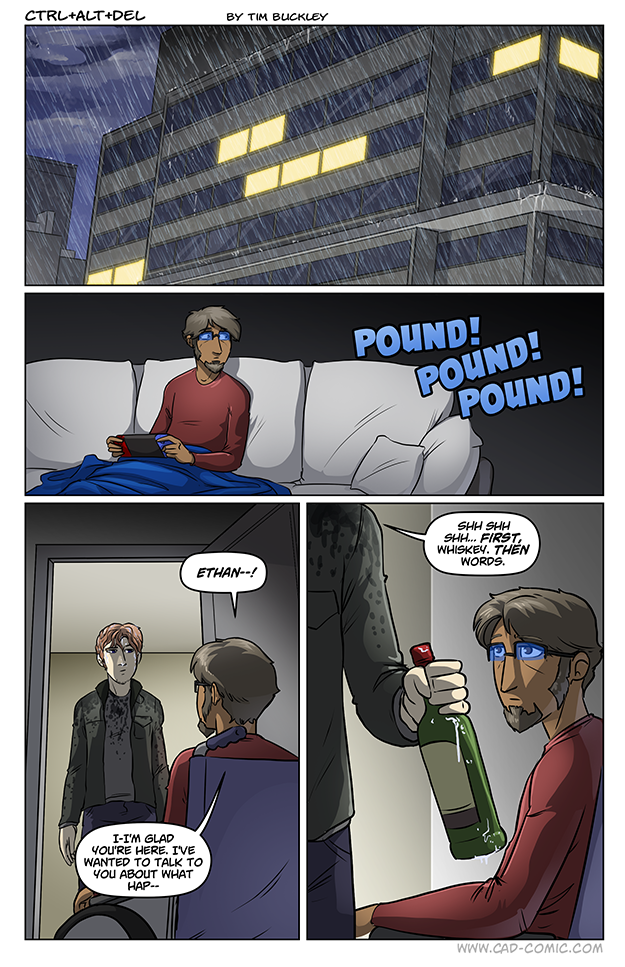 I almost upvoted this, but since it is AT 11, I had to leave it.

Or maybe One Bourbon, One Scotch, One Beer 😁

Brannigan? like john or zapp? I’m also curious to know what whisky it is.

Probably the whiskey’s name is Brannigan. I doubt Tim would name the arc after either of those figures.

What about the movie “Brannigan”?

A fight or argument either caused by, or made worse by, alcohol.

Given Ethan and Scott’s recent history and the bottle of whiskey… lines are getting crossed hard. Agian.

Is it an archaic word, by now? If so, pity. ‘Cos it’s certainly useful, concise, and alluding to a timeless and universal circumstance that will never fade from society.

Amen to that, I’ve already added it to my vocabulary. Even made it into a verb, “Oh, those two? They’re just branniganing.”

We could talk about Brannigan babies, maybe? Like, those resulting out of alcohol-induced, ill-advised hook-up’s. In my country, calling children “bendiciones” (blessings, in Spanish) became a trend from the classic types. So, we flipped it. Now it’s an ironic reference to children born to CLEARLY incapable and/or unwilling parents. Specially if they’re in denial about their bad decision. It’s usually shortened to “bendis” (bendi for singular). — In my life experience, thanks to a mix of good luck and good choices, I can say most situations related to Brannigans have been OPPOSITE Brannigans. A positive interaction, made possible or smoothed… Read more »

Whelp, sounds like we’re in for a real treat.

I learned a new word today!

It’d be Zapp I reckon; looking at that slightly pale complexion.

You see, Killbots have a preset kill limit. Knowing their weakness, I sent wave after wave of my own men at them until they reached their limit and shut down.

That was my thought based on the bottle shape and colors used.

In US slang it means a drinking spree, though it can also mean a noisy quarrel or fight…

Ah, yes, the perfect beverage to whisk away the thundercloud of hostility looming over the friendship.

Unfortunately, a Brannigan is a “fight made worse by alcohol” I think this is going to go very poorly at least at first.

Can this be a flashback?

I was wondering too if this is “now” or “back then”

I’m thinking this is current times.

fi imagine it’s now. He just had an event where he discovered that despite his best intentions, he couldn’t get the outcome that he truly desired. Much like Scott did.

My mind went someplace similar. This new Ethan is more introspective than CAD 1.0. I think this is post sun devil massacre, and he’s willing to talk, but first he’s going to let Scott know how he feels? Not quite sure where Tim’s going, but yeah.

Scott’s beard isn’t one of sorrow, it’s well kept. He’s still in a wheelchair, so this is post-incident. And he’s upright in bed playing a Switch, so (complete inference, here) he can’t sleep, probably due to some recent falling out.

i would say it is current, since it looks like he playing a switch in bed

At the risk of looking like a lost-in-the-past jackass, did the flying beer bottle tell him to bring that?

Thanks! Well found. Fitting title then 😉

Something tells me that it wasnt just the blood of the criminals but also deathblood.

Ethan hadnt had this sort of moment of seriousness since he let slip the hand of the troll.

I still rather doubt that. Even ignoring the implausibility of Ethan (ordinary human combat-wise) somehow overpowering experienced super Deathblood when he couldn’t even beat the ordinary thugs, I’d expect the police to have found more evidence if that actually were the case. (Also more damage, Deathblood doesn’t seem the kind to go quietly). I agree the sudden seriousness is uncharacteristic and shows that something shocked Ethan, but I don’t see why he would’ve had to hurt Deathblood for that. Watching several people (some of which he was even trying to be friendly with) get brutally murdered right in front of… Read more »

“Couldn’t beat ordinary thugs”? Respectfully I disagree dear sir. In less than a minute or two of clearly not doing his best he was already at a phase he could convince them from attacking him, opening up the discussion of surrendering. Ethan also has an arsenal of weapons that can take down beefy opponents in real life. If course in universe it can be different or they have some prevention measures, but a good taser can take big buys down. Ethan also has explosives that are pretty powerful, strong glue and apparently a firebomb. I think from the few things… Read more »

Fair enough, Ethan was mostly winning against the thugs. Still, that seemed mostly based on attrition from them not being able to kill him (and not trying anything else yet) rather than him actually beating them. While the thugs hadn’t harmed Ethan, he hadn’t actually disabled any of them either. He’d gotten a few more hits in, but all thugs were still up regardless. In terms of actual damage it was almost a draw, with neither side really achieving anything. (But yes, slight advantage to Ethan). I do disagree about Ethan being able to convince the thugs to stop attacking… Read more »

I want to agree with you, and what i said above is a theory at best. Ethan is essentially immortal but i could see if he had to weigh saving the lives of others good or evil and having them needlessly murdered by a sociopath who delights in slaughter.

I do not think he killed deathblood but i think he failed saving the gang, and managed to exhaust and apprehend deathblood.

Ethan is WAY more powerful than Deathblood if Ethan wanted him dead, he’d be dead. All he had to do was respawn in behind him, (as we have often seen him do) and open fire. Ethan doesn’t kill people though.

Ethan could easily beat “ordinary thugs”. He was explicitly choosing NOT to, in order to, you know, not kill them. He has access to several lethal tools and assuming that he can control his respawns (which it appears he can, since during that fight he appeared on top of a table in a perfect place to give a “You’re wasting your time, give up” speech), he could easily manipulate that power to give him lethal attacking angles. He could have beaten them easily. Instead, he was using his power to demoralize them into giving up, and it was working until… Read more »

Ethan is helplessly watching the world tell him “you’re wrong and alone” over and over, while leaving him behind. Impotent to stop it. Ignored or overruled when rising his voice.

No one seems to share his ideals and perspective. Not the media, not fellow supers. Not even his brothers in arms.

That is enough for many people to develop life-long scars. And certainly enough to bring such seriousness.

He’s handling remarkably well, for now. But enough of that, WILL break almost everyone eventually.

I thought of this right away as a potential twist, but it doesn’t fit for a few reasons. 1.) Lilah wouldn’t have asked “do you think it’s gang violence, or is a vigilante involved?” if Deathblood’s body was in the warehouse. 2.) The death of a notorious super like Deathblood would probably elicit a more significant reaction and level of scene security than this. And I think you’d see more than a lone reporter showing up when word leaked out. 3.) Also, I’m sure she wouldn’t have left so easily if THAT story was there to be covered. Given her… Read more »

Everything can be a fetish.

Anyone else got a creeping suspicion that this isn’t Ethan?

I know, right? He looks too pale, just not quite right.

If he’s been out in the cold and wet long enough, he would turn pale anyway. Blood supply pulled from limbs and extremities to keep the core warm. He could just be giving exactly zero fucks about the weather.

I think Ethan has just had a very bad couple of weeks.

It makes a lot of sense for Ethan to turn to Scott in this situation: He just tried to save someone (the thugs in his case) by standing in the way of an armed attacker, but ultimately it was futile and he could so nothing but watch. Thats exactly what Scott went through (ofc with the difference of fiancee vs people who wanted to kill him 5 mins earlier), so he is the one he might want to talk to. It could even be that the whiskey is for “ok, let us completley put away the robot thing for now”,… Read more »

Ethan knows what it feels like to be helpless, knowing he stepped in front of the bullet and it didn’t make a difference except to leave him broken (mentally), and now thinking “if I had the chance to stop an implacable killing machine I couldn’t reason with (Deathblood), would I have done anything different than Scott did?”

Sometimes when you walk a mile… roll a mile in another man’s wheel chair, you start to see the world through his eyes.

I think you make a very valid point here – he’s seen a similar outcome with Deathblood to what Scott saw as a possibility with Zeke. He may better understand where Scott was coming from now. I’m not saying Ethan agrees with the approach Scott took, but perhaps sees why he did it.

I’d like you to meet my two friends, Jack and Jameson

I’m guessing Jamison from the bottle

Plot twist. That’s not Ethan. That’s an android sent to exploit information from him, and kill him.

No no no…Ethan isnt near enough bad ass to drink whiskey, more like a wine cooler or maybe beer kind of guy

Robert
Reply to  Bulk up

You need to be a bad ass to drink whiskey? Booze is booze.

leduk
Reply to  Bulk up

I’m not a bad ass AT ALL and I enjoy a good whisky.