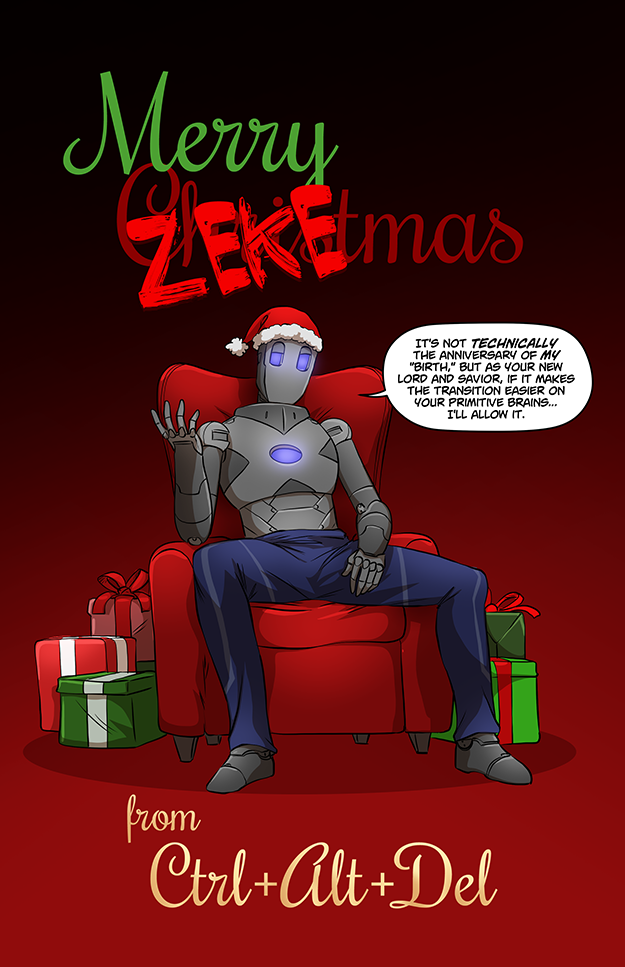 Thanks, Tim! Have a good time too.

The shear amount of swagger the pants give to this image is simply unacceptable. This has to be illegal.
Also Merry Christmas, fellow readers! May Zeke bless you with further existence.

And to think that it was the first ever item he bought online! Truly his intellect knows no limits.

While bowing down to our new robot overlord we must be thankful he took time out of his busy gaming schedule to provide us with this image and to so generously acknowledge us.

NOW I get it. Damn that’s dedication and planning a joke for the long haul! The X on Zeke’s chest was in preparation for this joke, right?

Not sure if this is a troll or not, but I believe in the OG run of the series he was created by Ethan out of an XBox.

Thus the reason for the X on the chest.

It was troll. I’ve been following the series since the beginning. 😉

And a Merry Christmas to you and yours Tim. Thanks for entertainment, the smiles and the excitement.

Is this a reference to the christianized Roman Empire allowing their colonies to keep celebrating Saturnalia and other winter festivals on December, as long as they made it about Jesus instead (who wasn’t even born that day)?

While I’m not sure that’s part of the intended joke, I scrolled down to see if someone else knew the factoid as well.

Nice pants. Merry Christpants everyone. It’s a time to be human and forget the online bickering. Have a great one.

It’s funny because it’s exactly what the Christians did when they stole the holiday from the pagans. lol

the pagan/barbarian tribes date back WAY further…. there is a reason in bible jesus birthday doesn’t line up with the 24th.
also remember that only puts it 2 weeks after the immaculate conception. that in of itself debunks the date as original date

The inner temple would be entered on the day of atonement only, so it would be September or early October. 15 months later it would be late December or early January. Thus it’s not guaranteed but also not that unlikely that Jesus was born on that day.

Thank you for giving him pants before having him manspread.

Cool now do Ramadan and Hanukkah or you’re a coward and a hypocrite.

As compared to your apparent desperation for validation?

Our robot overlords are above such petty needs.

Seeing this, we must really thanks that Zeke is using now pants XDD.

Happy Christmas to everyone

Is it just me or the pants make him look disturbingly sexy?

Don’t tell him that’s some primo manspreading, it’ll just piss him off.

To be fair, it’s less justified because there’s nothing between his robo-thighs.

Well at least he is wearing pants.

Sure, why not? We pretty much co-opted it from the last guys that partied around this time.

I, for one, would like to welcome our new Zeke overlord.

i for one welcome our new pants wearing robotic overlords