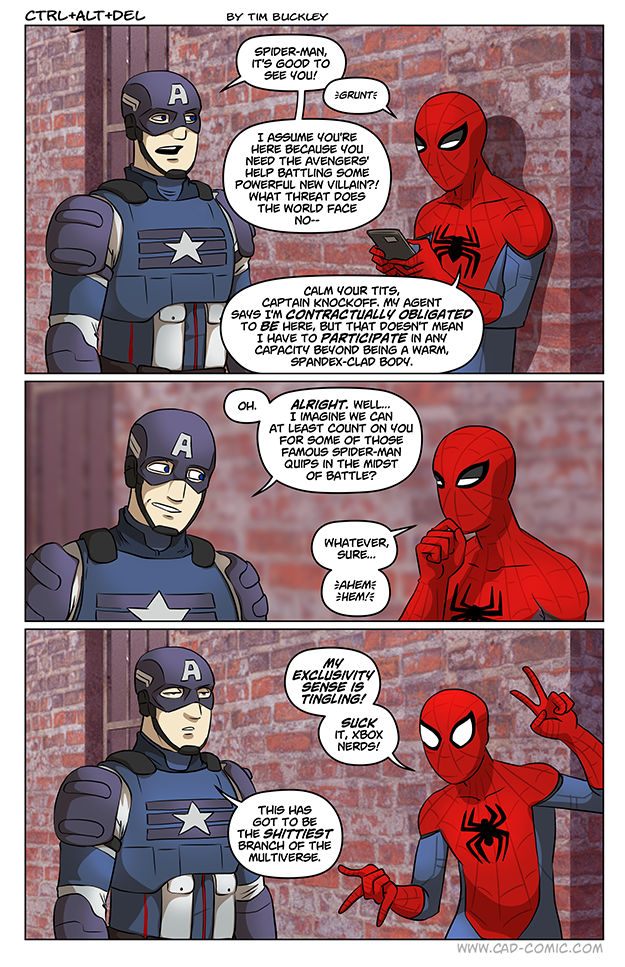 So Spider-man is finally coming to Avengers this week. Turns out, he’s packing light.

Previously every time we got a new character in the game, we’ve gotten a chunk of story/missions to go along with it. Really, the little bits of campaign we get and the mechanics of the heroes themselves are the only things this game has managed to do right thus far, so every little bit counts. I’m sure Spider-man will feel great to play as, but without any new missions, they’re basically just asking you to grind through existing stuff with him.

Now, the reason they didn’t bother with any new missions/villains for Spidey is (and I really do get this) that they didn’t want to spend a lot of time making something not everyone could play. I mean, okay, where was that argument at the start of the whole contentious Spider-man exclusivity thing, but whatever, we’re here now, it makes sense. Your game is struggling, why spend resources building a bunch of gated content.

Except now adding Spider-man is in this weird middle ground where nobody feels great. Xbox owners still don’t get Spider-man, and now Playstation owners get a “technically we delivered what we said” update that doesn’t really add much to the game and what it does add seems tacked-on. From what it seems, Spidey is sort of just tacked on. Yeah he’s there, but his heart’s not in it.

They did manage to find the time to ship Spider-man with some 40-odd costumes you can purchase in game though. Because of course they did.

Anyway, tomorrow is Thanksgiving, I’m not working on the holiday, so no comic on Friday. Have a great week, I’ll see you back here Monday!

Personally the Spiderman/Avengers – who gets what on consoles makes me a bit meh, but I understand that it probably feels like I do as a PC gamer with the news in a similar vein that when (eventually, if I’m not dead by then) Elder Scrolls 6 comes out, it will be Game Pass exclusive, yeah Xbox and PC get it, but only on the MS subscription scheme, “not happy Jan”.

thats when you speak up with your wallet. dont pay up, go spend on something not doing what you dont like.

I do exactly that – vote with my wallet. Unfortunately most don’t, which make these stupid decisions occur more frequently, do the detriment of all gamers, irrespective of platform.
But even if you vote with your wallet, it’s still a disappointment when it was something you really wanted to purchase, and then get hit with that news.

As for Avengers, Spider Man was going to make me reinstall it briefly. Now that I know there’s no mini-campaign with him, I think I’ll hard pass.

You gotta give the guys some credit, though: being able to leave everyone disappointed with a single move – now that takes skill and experience.

I haven’t watched much Avengers stuff since it came out (and I never bought it) so I gotta know – did they ever introduce any enemies beyond the robots? Beyond AIM?

That was just one very small story in the franchise. You’re almost doing yourself a disservice by not finishing it. Go watch the rest of them.

Dude, I just….oooooooh. Hey, Logan….cool name…. I´ḿ trying to come up with a new one, any suggestions? I like Macabre ******* etc type thing…have a great one!

Me-me was talking about the game, not the movies.

This is correct, but to be fair, I also stopped watching the movies, after Age of Ultron.

The definition of compromise: a result that leaves everyone involved a little disappointed.

Vicente Sampedro Burgos
Reply to  no thanks nintendo

Well, those are the shittiest man-boob pecs dangling under the cap’s chest piece. Is that canon or commentary?

(psst this is a joke) When you take a day off from working at home where do you go? the basement???

I wonder when Disney is just going to buy DC so they dont have to worry about who owns what charactor any more?

Warner Brothers owns DC Comics (and a lot of other stuff), so that’s who they’d have to buy. And given Disney’s recent acquisition of Fox, I doubt that deal would be allowed to happen.

doesnt stop them buying DC from them. thats only who they have to deal with.

Ever notice how similar the two superheroes look?

Not sure this goes into it but… feels like another way Sony gets to say, “Guys, we own him. We let you enjoy him in Marvel content because we’re that gracious. But we own the web-head and everything attached to him.”

I knew they’d do something like this which is why I chose not to even touch the game until he got added.

What if they’d done a “Marvel Knights” expansion for street-level heroic shenanigans, and other platforms got, say, Luke Cage, Iron Fist and Daredevil, but PS players got Spiderman for this expansion as well? Would that have worked better?

In terms of work-load, it would be even worse.

I actually bought the game full price on both PC and Xbox to play with different people, and apparently I managed to buy the two platforms NOT getting Spider-Man. Makes it really fun when The Avenger’s twitter account keeps tweeting about Spider-Man, its like a big ‘fuck you’ right in my face. On top of all of that the game isn’t at bare minimum cross progression, so even if I wanted to try out Spidey, I would have to restart the game and all my characters from scratch. Again. Honestly I just gave up on playing the game, I didn’t… Read more »