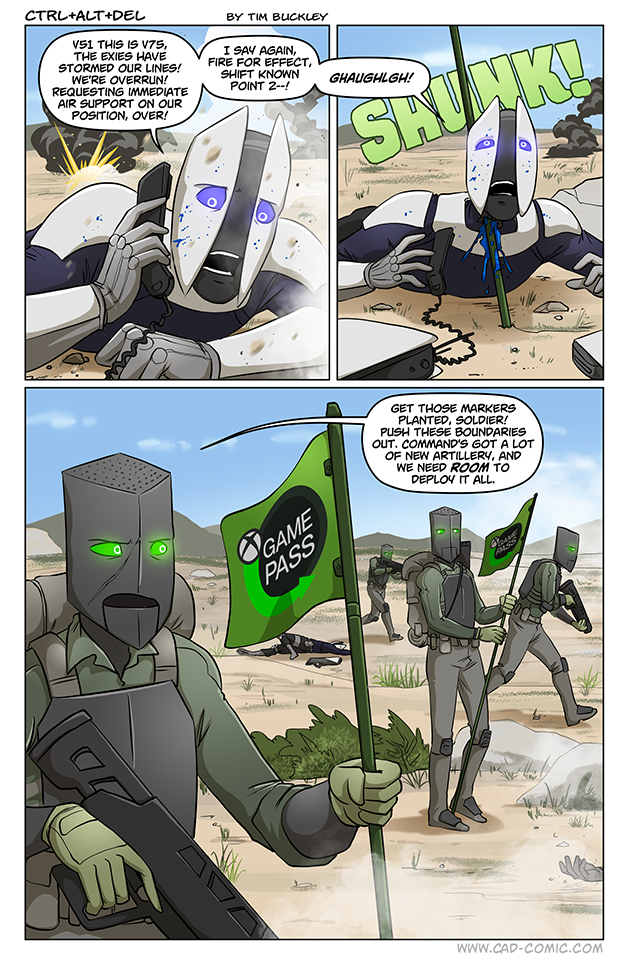 With Microsoft finally closing on the purchase of Zenimax this past week, Game Pass (which is already arguably one of the best deals in gaming) got a sudden, huge influx of 20 Bethesda titles to the service.

While these are admittedly older, previous generation titles, so far the start of this new console generation has been incredibly tepid. With inventory issues preventing most people from getting a system, and the pandemic pushing back the release of some of the bigger console exclusives, right now any move to add value to a console/service matters, and it’s hard to deny that Bethesda’s library is a big get for Microsoft’s platform. They’re even talking about framerate enhancements for the Series X.

I do wish the PC side of Game Pass got a little more love. I understand why it doesn’t (Microsoft doesn’t make money from PC sales the way they do on Xbox sales), but getting Outriders for free would have been nice.

As promised, the first wave of the Console Wars Art Series are now available for pre-order. All pre-ordered posters will be signed. If you’d prefer to just have them as desktop wallpapers, you can get all three high-res desktop wallpapers right now at the $10 Patreon tier.

You know what? I just gotta upvote that. Made me laugh.

Don’t do it again.

Is the starcaster volume done?

no thanks nintendo
Reply to  Daniel Sørensen

Robert Loughrey
Reply to  no thanks nintendo

odd place to end the issue, but seems like it yeah.

Why is it odd?

As an S series owner im wondering how they will be represented…
I’m thinking ratlings from 40k small runty but still have a kick. 😀

More like flings with their smelly feet but one heck of a soup. xD

That smell is the scent of win. You try barefooting it round Mordor. Its the equivalent of walking barefoot round your house, but your carpet is made of spilt Lego.

One does not simply barefoot it round Mordor.

“I love the smell of burnt halfling feet in the morning.” – Ogruz Soupwrath, Ogre gourmet cook.

I was going to make a joke about foot fetishism, but then I looked up the medical term and realised one mistype and I would be accusing people of something REALLY dark….

I downloaded Skyrim again on my Series X. It plays beautifully. Plus you get the chance to go back and play Morrowind and Oblivion? Game Pass is a dream.

its like a modern day blockbuster.
you buy the access rights / license to use something.
But you don’t own it.
Has its up and downsides, i for one like owning the things i spend my money on. vOv

I used to feel the same way, but even owning the physical media doesn’t prevent issues. This is going back but I had games that stopped working on new computers because a hardcoded “Check for Windows 95” made several games stop working on newer computers that had the technical power to handle them. Then you have games like Battleborn which was unfairly compare to Overwatch and now even though I own the disc you can’t actually play the game anymore because they took down the servers. I also just don’t tend to replay things due to lack of time so… Read more »

Gaming as a Service requires you to have an active and fast internet connection. Now i dont know where you live, but i am going out on a limb here and say it is not in rural america with AT&T as your ISP. If you, like me, live in a country where the government decided that fiber cables where the future and not copper, then you might have fast and cheap internet now, other than that, its tough luck. As for the “outdated software” problem. I cracked open my “Command and Conquer” the first decade edition, added an external DVD… Read more »

but, have you played it on PC, with all the mods starting with ENB (graphics ) to content mod with greater content size than official dlcs

Seems like the Xbones (or Exies) are really pushing it this time. And to think the PSNumbers (I forgot their nickname) were already celebrating their victory as dominating force on the market not too long ago in this Console War series.^^
I bet someday some fan of yours gonna make a game of this series, kinda like that one flashgame where you advance from the stoneage to the future in 2d sending caveman after caveman out to hurt the other cave and both sides keep evolving over and over again.

Yeah, I think that was its name. Though ofc you would have to rename it for this purpose, like Generations of Console War though this sounds like a mouthful, lol.

This goes well with XBox’s service outage a day ago (as well as numerous other Microsoft services). 😀

A phone with cord? Really??? What ancient piece of technology is that?
🙂

your dinky cell phone isnt going to send out jack when your 100 miles from the nearest tower. A sat phone might do the trick but few things beat a good field radio for mid range communications but they are a bit to big to be hand held, hence the wired handset to the main box.

I got my pre-order for the Console Wars bundle in. They look so cool.

Gotta say, I’m impressed with Microsoft’s initiative this generation. From being #2, to #3, to now being in a *very* interesting position when others might have just pulled a Sega or Atari and bowed out. When I buy into next gen, I’m strongly considering XBox Series over PS5, and *not* just because I think the PS5 is ugly as sin. I’ve never cared much for Sony’s first parties, and all the oddball JRPGs that made me love my PS1 and PS2 come to Switch, anyways. This is going to be an incredible cycle. All three are in an excellent position… Read more »

The part I find strangest about this one is that the PS5 communicators aren’t wireless.

I am thinking that you could do some kind of spin-off with the “Store Wars” on PC: Steam vs Epic…uPlay, Origin and GoG can make some kind of guest appearances. And just for the lulz include uTorrent as some kind of demon everyone is afraid of.

I have both consoles, and I’ll be honest the Series X get’s a whole lot more play time so far. Don’t get me wrong I have been hoping into PS faves like HZD and my fave zombie game Days Gone (SO WORTH PLAYING!!) but even the Spiderman Miles Morales hasn’t yet been more than installed and looked at once. My wife does really love playing NMS on it, but we moved and our living room in old place, a 50″ worked, we were… 7.5″ from the TV but the new place is a HUGE room, and we’re 20″ away. We… Read more »

What about the Demon souls remake?

Not really my kinda game. I did beat Cyberpunk 2077 on the Series X, really didn’t have issue with it there. I do like the PS5, the controller is snazzy just… haven’t really been a game yet that snagged my attention

The reviews for the Bethseda titles are proving more troublesome for the PC Game Pass than beneficial. It seems they crash frequently and video quality is shaky at best. Yeah, Microsoft isn’t doing their PC fanbase any favours with this.