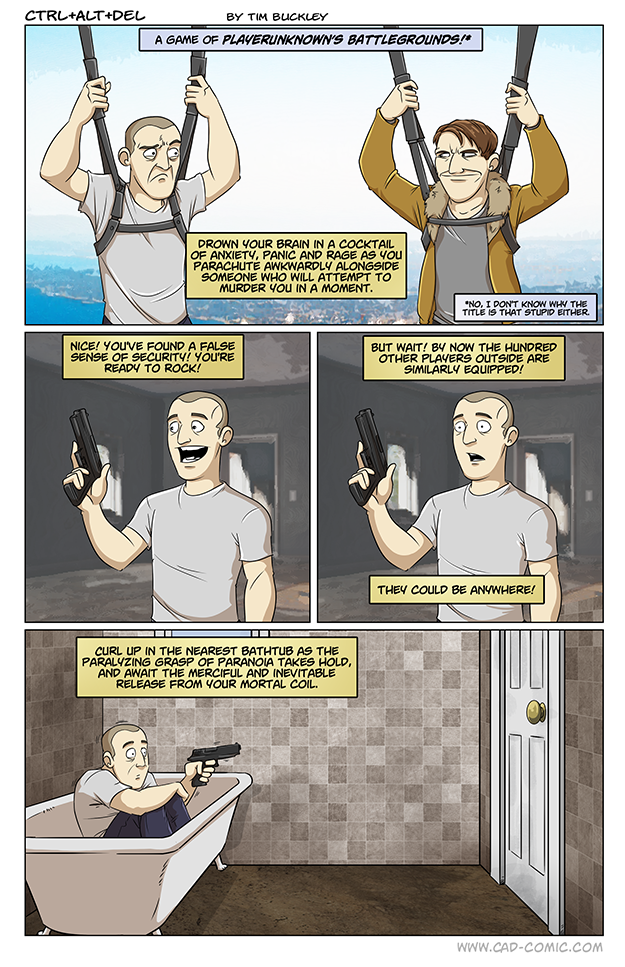 PLAYERUNKNOWN’S BATTLEGROUNDS (seriously, they allcapped the title) is the new hotness this week. I dig the idea of battle royale, but H1Z1 never did it for me. It’s too… arcadey? I dunno, it just didn’t click for me.

PUBG is a bit more tactical, though. You get to choose when you jump out of the airplane to parachute in, which lends a bit of strategy to the opening, and then just in general I feel like the game promote a more cautious gameplay, as opposed to run and gun.

Of course, this has its drawbacks… I haven’t streamed the game because I feel like it would be painfully boring to watch. It seems to me like the best strategy involves getting yourself set up with a good selection of weaponry in a nicely fortified centralized location to minimize running from the ever tightening boundary of death. At that point, it’s just a matter of waiting. Letting others wander into your crosshairs.

I actually enjoy the approach; it makes for some incredibly tense situations given how the game uses sound to convey presence. It’s very hard to sneak without making ANY sound, so while you’re holed up in your spot, you’re listening intently for the slightest sound which might signal an intruder.

The variety of ways in which a match can play out is what keeps me queuing up, and although these days I tend to steer clear of the “early access” trap, PUBG is surprisingly polished and playable for a steam title bearing that designation.

*flashback to Rust comic*
I don’t know if that means IN the nose, or WITH the nose, but it’ll make you upset either way!

All battle royale are shit. ALL.

not all. lol cant just trash an entire genre