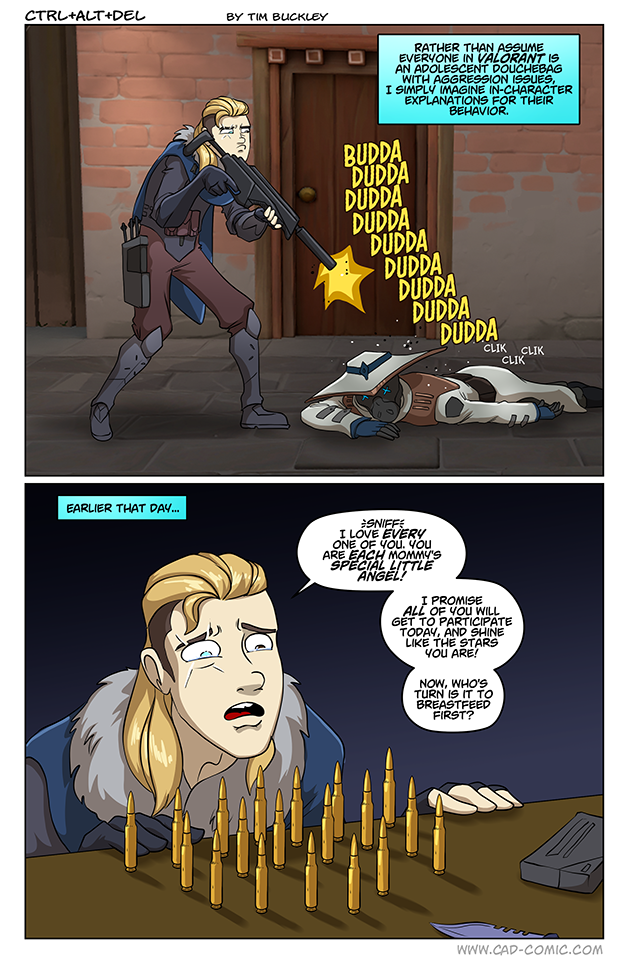 I didn’t expect a lot from Valorant. In fact, I sort of went in planning to dismiss it as another Overwatch mimic. I am, however, really enjoying it. I like the slower pace, the focus on balancing patience with aggression, and the abilities which accentuate but don’t replace the focus on weapons.

The low damage threshold definitely means I get one-shot by some lucky hits, and also land some totally bullshit hipfire kills myself. It also means there are times when pausing to collect yourself, and aim makes a world of difference. One well-placed shot is all it takes.

As far as tactical shooters go, Valorant’s aesthetic grabs me in a way Counter-strike’s straightforward approach never could. Everything from the characters to the UI just feels like a huge step forward from a game-type that CS has obviously dominated for a long time.

It is, of course, both a competitive shooter and a Riot game, so it attracts just the sort of community you’d expect. Communication in the game is pretty sparse, I find, but players still find other ways of communicating. It’s not enough to detract from my enjoyment of the game, and I’ve been having some fun with it in the downtime between matches.

I gave it a go shortly after launch last week and honestly I was just sort of… Nonplussed by it. I didn’t think it was a bad game, but it didn’t really grab me either. It feels very much like a launch title or more a proof of concept piece than it does a fully realized game, though I hope that changes as time goes on.

looking at a few of the beta videos of it i always came away with the thought of “why are people excited for this?”. and then it releases and gets reviews of “meh.”

Tbh i love it… Stopped playing CS 1.6 in 2004 and 16 years later this game makes me sweat the same way after my first ace with only 5hp left… It just feels like a good old friend with almost the same bullet spread, wallbang shots, distant footstep audio and so on.

I think this is why I like it also. I played 1.6 and CS:S and got pretty good at it, then went to CS:GO and could not shoot anything ever. With Valorant, I am finding that my aim is coming back and the abilities are not super OP that I have seen yet. Each has a niche that it can be useful etc. I still prefer the straight shoot them in the face approach and if you are on defense, defend your spot. The CS lessons learned stuff. 🙂 All in all, playing a little bit here and there.

Fiction is stranger than truth……..

I never saw the appeal of the game. Felt like it was counterstrike trying to be Overwatch more than anything else. And then there was the anti-cheat program that was in the game that has really deep access to your computer and in some cases it screwed up a lot of people’s computers. That alone scared me away from the game because no game should have that kind of access to your computer.

That explanation makes more sense than it should. 😮

It’s a game I want to like, but the learning curve is a bit steep for me. I don’t feel much motivation to try and get better when many people just fire blindly and somehow manage to hit me. One kill out of 13 rounds does not confidence make.