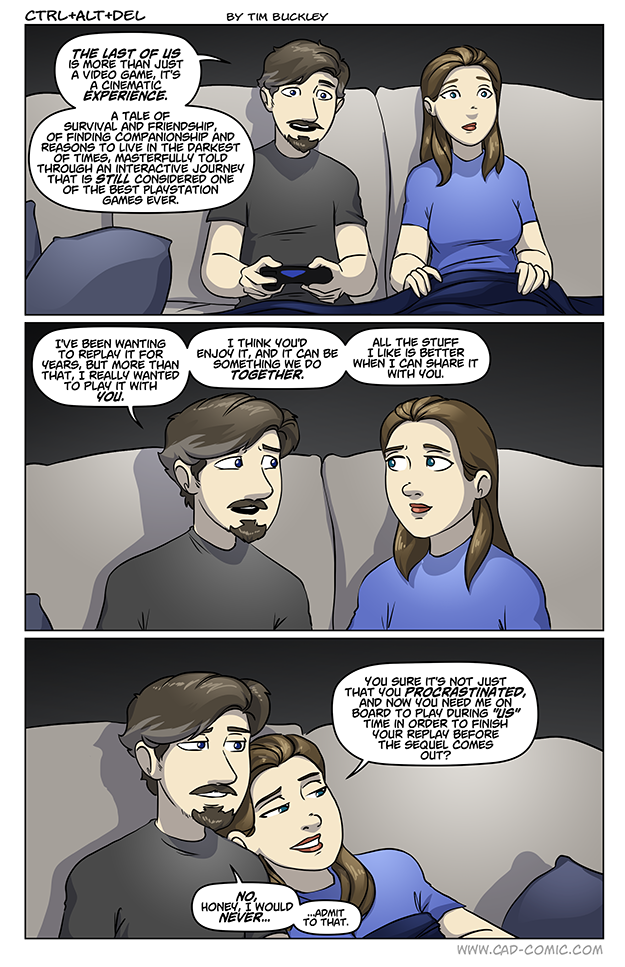 I spend most of the hours of each day making sure the important things in my life, such as my kids, my wife and my work, get the attention they need. It leaves a very finite amount of time for video games, and so I have to plan strategically what to play and where.

For instance I can sneak in a violent PC game in my office, but (especially with the kids pandemic’d at home now) the living room TV is only for games I’m okay with them walking in on. After they’re in bed is fair game, but the first few hours of the evening is dedicated to spending time with my wife, just us with no kids. So there tends to be a small window between that and when I’m too tired to stay up any later, that I can play console games for me.

However, every so often I can manage to merge these things in a way that everyone is happy. My wife enjoys games, both video and tabletop, but I’m not sure I’d call her a “gamer” insofar that she would play them of her own volition. But she’s happy to join in if the right game captures her attention.

Some games just aren’t fun to watch someone else play, so it’s got to be the right kind of game, and I think TLOU may fit the bill. To this day the experience of that game has left an impression on me, but back in 2013 I didn’t know it was going to be such a great game until I was already too far into it to ask her to jump aboard and play through it with me.

So, we’ve started playing through it again, just in the nick of time given the sequel’s impending release. I’m excited to refresh my memories of the journey, and I’m anxious to see if the story of Joel and Ellie lands for her the same way it did for me.

because you really intend to play the sequel?

you’re braver than I thought XD

I bought the ps3 JUST for that game and then played less than 3 hours… now the ps3 is full of dust. Never understood the hype.

Funny enough I never realised that my missus is a gaming buddy that I left untapped.
Most of my friends hate playing turn based games like Civ and grand strategy like Hearts of Iron 4.
The missus liked playing them cause they don’t require super fast reflexes like shooters do.
So now I spend most nights with the missus on our computers playing Civ and such

Probably going to miss the sequel, based on the leaks I’ve read, I’ll save my money for Cyberpunk.

After hearing about the leaks and considering how much I love the characters in the first one I will never play the sequel. I will as far as to not even consider its existence and just have joel and Ellie have the happy ending they deserve, if only in my mind.

TBH thats how I felt about the Taken movie franchise when they started on making sequels. I honestly feel some things really aught not to get sequels.

Totally feel you on the ‘family friendly’ games front. The Switch has seen way more usage than the Xbox during this lockdown. Games like Smash Bros, Let’s Go Pikachu, etc. have suddenly had a lot more playtime. My wife (who never games) has even started playing some of the LEGO games with our son.
I’m left only just managing to squeeze a couple of hours of Warzone in an evening!

One of the 3 games I bought to play on the PS3 console presently sitting under my desk.

Do yourself a favour and just play it ;).

One day I saw it on a shelf at my buddy’s flat and went like “dude, you have it, such a great game, right?” and he just replied with “nah, I tried it for a bit and I totally don’t get why so many people like it that much”.
Met him a year later and he literally went “You know what, I launched it again and played through the whole game, I was wrong”.

I never got around to the DLC, this game destroyed me so thoroughly.

One of the best PlayStation games? We all know the true best game. Knack Baaaabbbbyyyy

My wife is a gamer, Arkham games, Tomb Raider, Resident Evil etc but she will also play Minecraft. She likes watching me play games like the Final Fantasy series because she enjoys seeing the storyline progess. With both my wife and I being gamers and 3 kids, 12, 6 and 2 (he has begun playing spyro), we have to allot times for everyone and even pair up times for co-op games too. When I get done with work I spend time playing games with my 6 year old daughter if we aren’t able to go outside, lately it’s been Minecraft,… Read more »

The PS5 has arrived and I can’t wait for Console War’s next chapter. Can we get some concept art of the Fives beforehand or should we just wait until the Finheads begin their march?

Awwww I’m jealous! The only video games I can get my wife to play is Just dance and Wii Sports resort. Both are fun with the whole family.

Final panel, THERE’S the Tim we know and love……

Now get her to play MOTHER 3…
Look, just because you don’t like RPGs doesn’t mean she won’t 😀

I never entirely got how people had TLOU2 ruined by the leaks.
Like… just don’t read the leaks?

Some people tried to avoid the leaks but ran into them anyways. Some people are douchebags that post spoilers without any warnings. Though a lot of people I know that were spoiled are glad they got spoiled but are pissed at the way the story went.

I know about that sort of thing, but i guess it must be pretty much exclusively within the TLOU forums/topic boards/fanpages/etc, because ive literally never seen a leak posted anywhere. I don’t really follow TLOU, but i do follow plenty of places those leaks could have popped up.

I’ve seen them wherever TLOU 2 is discussed anywhere, including the comment sections on youtube, twitch chat, etc.. Some people will just leave a hint of the spoilers and others make big lists.

The first time I started playing TLOU, I had my wife watch. I made it about a 1/3 of the way through before our first child came into the picture (very rough pregnancy). I finished it on PS4 on my own.

100% me with gaming during date night with GF.
luckily she a gamer also and does it back to me.

“We” beat pokemon together on her switch recently. I picked scorbunny for the party….

I just started playing this yesterday and it feels really weird playing the game right now. Given that there is a pandemic resulting in government quarantines on top of the many incidents of police brutality and the current protests against it. The game feels almost a little too real at the moment.