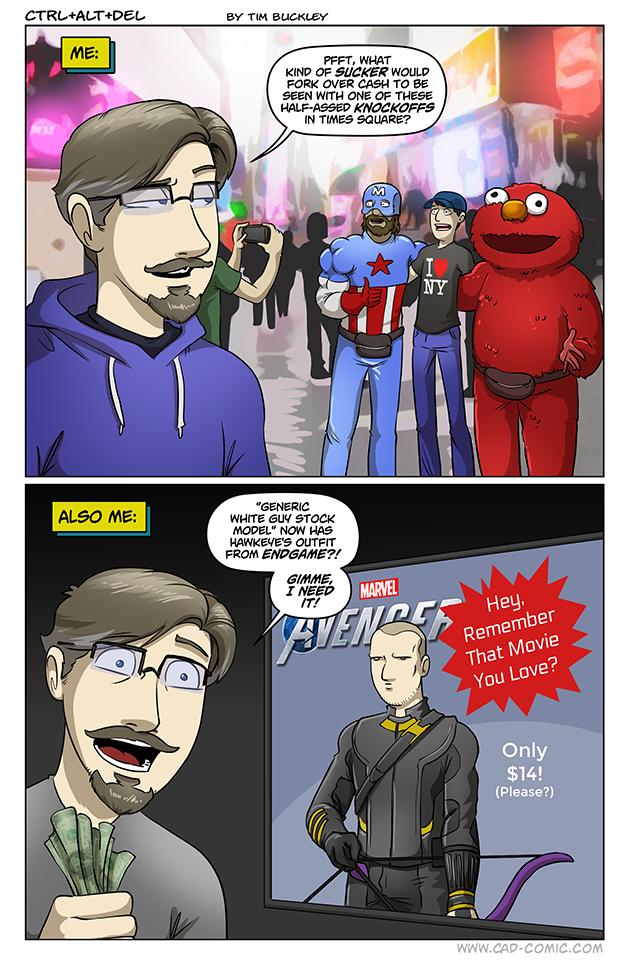 From the get-go, the Avengers game heroes were clearly not the MCU versions. I know a lot of people struggled to accept that, but I was always content to simply let them be a separate thing and tell their own story; after all, we’ve had countless versions of these characters across different media, so why not one more? And the game’s campaign did a pretty good job of solidifying an original, enjoyable take on the team.

Now the game is introducing MCU costumes from Endgame, and as an MCU fan I am thrilled. From day one I have loved the combat mechanics in this game, and now being able to bring in some incredible looks from the MCU while I smash robots is even better.

At the same time though, it’s hard to ignore that it directly challenges my attempts to view these heroes as separate iterations. While once Avengers-game Hawkeye was just a version of Clint Barton doing his own thing, having him wear Jeremy Renner’s Ronin costume suddenly makes him an imposter, a cosplayer doing a bad impression of Jeremy Renner.

I find myself in the middle, stuck between loving the MCU costumes, and being unable to ignore how much they single-handedly make the game characters feel like Times Square Mascot versions of the cinematic heroes.

It doesn’t help that the developers are only partially being faithful to the MCU outfits. Clint and Natasha both have their costumes from the film, but neither game character has the hairstyle to match. This hesitance to tackle the details makes me question how they’ll handle Thor’s thicc Endgame look, since it requires girth as well as a unique hair/beard combo.

Iron Man and Cap look daaaaamned good, though. I hope Endgame isn’t their only foray into MCU costumes, because there are a few choice House Party Protocol options I’d love to see.

Well, at least it is not “pay to win” if it is only cosmetic.

Some games have “pay to advance quickly”. I feel this is the only microtransaction that makes sense for busy people, everything else feels like you’re not getting the correct bang for your buck given how busy those guys are…

Wouldn’t be needed, wkz, if *certain companies* didn’t purposefully throttle leveling (like this one.. >__> ), just to make the grind take longer… so people feel more need to spend to get a “boost”.

Some Guy
Reply to  Logan

This isn’t conspiratorial, they literally slowed levelling down. There excuse was that levelling up after level 25 could be too confusing.

Why are you playing the game if you have a busy schedule then?
Why not include an easy mode or cheat codes for those that just want to skip through the game?
Why not get the PC version and use a trainer or simply hack and/or mod it?

People paying to win only makes sense if those same people have more money than sense.

“oh jeez, why would you take these 10 free minutes between all that time spent working, eating and sleeping (and others) to play video games?”
probably because if they don’t they’ll shoot up the block lmao

“oh, so, you have a family, a job, a social life, how dare you like a game!”. Sorry, I have no problem buying plat on warframe sometime.

Some pepole just enjoy having a character that looks different. I have put too much money into LoL / Dota / CSGO skins, and none of them improves anything other than looks.
And I don’t regret anything. They are all free games, and I’ve put hundreds of hours into them, I want to support the developers. And if I can have a nice cosmetic along with it, so be it.

I often hate stat improvement skins. Because what the developer considers a good look versus stats I might like are usually opposites.
If I buy a skin, it is for a look I want.

What about a certain battle royale game that you can buy a cosmetic skin that does not offer any “stats” but the skin itself is say a black shirt with tree limbs and stuff coming out of it. Versus the free skins that can be unlocked by game play is the hot pink shirt? No competitive advantage there at all right? /sarcasm

So you’re in favor of pay to win items?

no, pay to win games are an abomination with mechanics made purposely so people will shell out money
my problem is that you shouldn’t blame the player in this case

Yes, it’s interesting to have nice skin to PAY MONEY for, but maybe we are waiting from launch for an actual decent endgame (not grinding the same missions forever), the spiderman dlc promised, e.g.
This is a gret game that is becoming the next anthem because it’s abandoned.

I believe austindorf was referring to the player base, who did largely ‘abandon’ the game compared to launch if I get it correctly.

He directly referenced Anthem, which went without updates to try and improve the game’s situation for months. But alright, let’s assume we’re talking about players. I would point to the speed at which I’ve gotten full matchmade groups the past few days as an argument against “abandonment.” Avengers still has a long way to go in terms of content to fulfill the promise of its premise, but thus far the developers seem committed to sticking to it and getting there, albeit slowly due to pandemic-related hurdles. And there’s also an audience of people out there that enjoy the mechanics/characters, and… Read more »

The apologies for the live service model, where you pay full price for one third of the game, and the third you got was glitchy and broken.

But so long as the players keep playing the 3rd of the glitchy games the developers will eventually release the full version, hopefully in a working state.

But most times if not they just drop it.

Live service for the win.

This quote isn’t getting the attention it deserves.

Why not wait until you can get that skin as part of a pack that’s at least 50% off? That’s what I do with my dlc(wait until it’s all bundled together and on a discount) although I never buy skins.

Because he has disposable income and can spend it how he wants?

And not all companies/games offer a package deal like that. So, sure.. tou could “wait”. But unless they have a record of doing such, there’s no way to know *if* they’ll do it. So, people will buy as soon as they can. It’s a “FOMO” kinda thing.

Because I love the Avengers (characters), and I enjoy the mechanics of this game, and I feel like the game needs more content and I want to support the developers in trying to get there. I’ve already gotten enough hours of entertainment out of my initial investment in the game’s cover price that I felt I could throw them a few bucks for what’s coming down the line next. The only reason there’s content to eventually be “bundled and discounted” is because there are people out there supporting at release in the first place. You can vote with your wallets… Read more »

The thing is, the models from Marvel’s Ultimate Alliance 2, still look perfectly fine to me. While the models from Avengers, look like really weird knock-off from the movies. They both go for realism, so what’s the difference? It could be that Ultimate Alliance 2 came out before most of the movies did. But I don’t think that’s it. I never had a problem with Wolverine, and he had plenty of movies back then. And I’m talking about how the game looks to me now, rather than back then anyway. Honestly, I think it’s the costumes. They intentionally made everything… Read more »

I don’t think there’s particularly an “issue” with the design of the characters in the game. For a long time these characters were able to be fairly nebulous in their appearance as long as they adhered to the overall scheme: Tony Stark had dark hair and a goatee of some sort, Thor is blonde and powerful, etc. The level of detail even on the most intricately done comic books isn’t the same as identifying these characters with an actual human being. For the near future when most people think of Iron Man they’ll think of Robert Downey Junior. Hawkeye will… Read more »

Fun fact: I wasn’t aware knock off Times Square mascots were a thing until I actually went there a year and a half ago.

I lived in NYC for about 14 years. The absurdity of how bad some of the costumes there cannot be downplayed. Granted most New Yorkers avoid Times Square as while I’m sure at one point it was a genuine part of the city it’s now mostly a tourist trap. I did once see a couple guys who had clearly lovingly crafted their own Alien and Predator costumes in times square.

I’m a regular follower, not a critic troll seeking people to harass, and typically I can appreciate that you’re not ashamed to like things.

This time though, obviously there was supposed to be a joke here, but I think you really did just paint yourself in a negative light on full blast. These two scenarios absolutely are equivalent, and not in a good way.

If skins were like $1 or something, then ok whatever. But costing as much as a whole ‘nother game?

“I don’t want to shame you, but hold on while I try to shame you.” First of all, taking the piss/laughing at myself was the point here. Second, perhaps there is an indie game out there I could have scored for $15, instead of purchasing an Iron Man skin. But I have a limited amount of time to play games, and you’re suggesting its somehow a more “acceptable” use of my money to go buy a whole separate game to try and find time for, rather than increasing my enjoyment of a game I already own and play? That’s ridiculous.… Read more »

Please tell me that I’m not the only one who at first glance thought Elmo was wearing a banana hammock.

I honestly forgot this game existed.