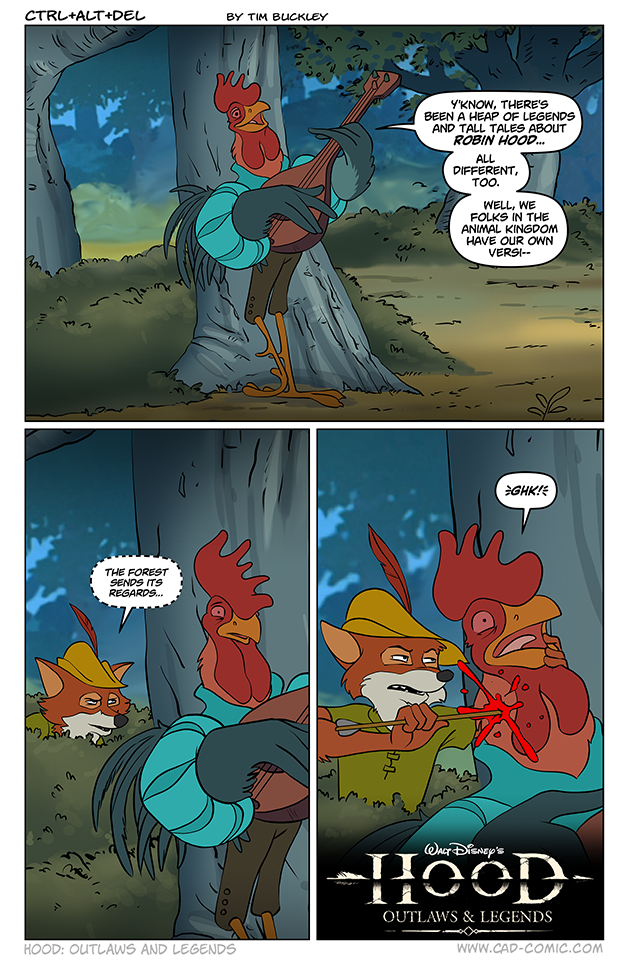 My very first exposure to the Robin Hood legend (and I presume this is true for most kids of my generation) was the Walt Disney animated film. I loved that movie as a kid, and it set the tone for how I thought of Robin Hood for years to come.

When I was older, the Kevin Costner film gave me a slightly more grown-up take on the story, and later Cary Elwes provided some laughs over it. There have been a couple more attempts since that don’t even warrant a name drop, but none of them come close to feeling as dark as Hood: Outlaws and Legends.

I’m enjoying the game as a somewhat-stealthy 4v4vNPCS capture type game, and at a reasonable $30 I can be more forgiving of some of the game’s (hopefully temporary) shortcomings. I’ve put over 30 hours into the game so far, and while there are some balance and content updates sorely needed, I’m having a lot of fun with what they have so far.

But watching Little John go Gallagher on some guard’s skull with his sledgehammer, or Robin sneak up behind to stab a silent arrow into an unsuspecting neck, remains at such stark contrast to the characters I held dear for so many years, it’s hard to even reconcile them as being based on the same story. Even though it’s likely that Hood is far closer to the truth of things than Disney’s light-hearted animal romp.

You should try and find episodes of “Maid Marian and Her Merry Men”. Fond memories of that retelling of the Robin Hood story from my childhood! Note, it’s *very* British.

Reminds me of an episode of the Simpsons. Something like “he was as feisty as he was delicious.”

The one with men (manly men!), men in tights, right?

Rumor has it that they roam around the forest looking for fights.

The animated is by far my favourite, I automatically start whistling that tune, and my wife appears with knives in her eyes… just a great film. The Rickman/Costner one is good, and the Crowe one wasn’t bad tbf. I’ve a confession though, I’ve never seen Men in Tights…
I’ve ofc seen the memes and some bits of it, but never bothered on the whole thing…

To talk about a Robin Hood game, mention some works which came before and forget Robin Hood: The Legend of Sherwood?
BLASPHEMY!
🙂

How about Christy Marx’s Conquest of the Longbow?

Here in the UK in the mid 80s we had a TV show – Robin of Sherwood. It was so good. There were some very dark episodes, in particular the feature length Seven Swords of Wayland

I loved that show! It aired here in the states on the Showtime cable channel. I thought tying Robin to the myth of Herne the Hunter was a cool take, and it was also my introduction to the music of Clannad

I loved those movies when I was younger. Disney’s Robin Hood was epic, and Men in Tights is always good for a laugh.

Cary Elwes will always be the best Robin Hood, because he could speak with a British accent

Your name is Mervin? Aways cracks me up

Yeah, it’s like the Disneyfied version of Moses all warm and lovable vs. the brutal, overbearing thug in real life who just wanted to rule over others.

I so love the art on this page! It’s fantastic and true to the classic!

No love for the classic Errol Flynn version? Men in Tights clearly takes a lot of inspiration from it as well as Prince of Thieves

I might be risking to being lynched alive here, but I never liked the Disney version of Robin Hood. Maybe I watched it too late, since I had the images of several other Robin Hood films already in my head, and I found the animated film seriously lacking and too childish. Also, it was very cheaply produced for a Walt Disney movie, they even used several scenes from other movies, for example the Jungle Book! Yes, they just changed Baloo to little John and used the exact same motion sequence, they did this more than once (it was a time,… Read more »

Oh man, now this brings back some memories. I’m gonna be whistling that theme all day now.

The game screams “For Honor” with its mechanics and is pretty close to being an unbelievable mess. But “Even though it’s likely that Hood is far closer to the truth of things than Disney’s light-hearted animal romp.” – I wouldn’t be too sure about that. 😉 At least Robin in the cartoon version didnt have such a big and deep hood that it is absolutely detrimental to using a bow effectively in reality. Too much fluff too few filler. And Maid Marian…*hint* medieval times super misogynistic and patriarchal society. What they are going for is a female celtic warrior…just about… Read more »

I am with you right there. Granted the minute I first saw the first panel i could hear the opening song in my head.

I remember begging for anything associated with Disney’s Robin Hood as a kid, but my parents insist that when they took me to see the movie, I fell asleep in the theatre. I lived in Mexico City at the time, and they had a movie theatre that was dedicated to showing all Disney movies all the time. I always begged to go. In addition to Robin Hood, I believe we saw Pinocchio, Cinderella, Dumbo, and Peter Pan there. Then we moved to the U.S., and the movie selections morphed into Herbie the Love Bug, The Bad News Bears, and Smokey… Read more »

So this version of Robin Hood just kills with no reasoning? I’m clearly not familiar with the game. Seems pretty brutal.

“none of them come close to feeling as dark as Hood: Outlaws and Legends.”

Huuuu, yeah… you must have missed Robin and Marian with Sean Connery and Audrey Hepburn. Somber all along and the bleakest end ever.

How come nobody has mentioned “Robin and Marian” so far? Great movie, with Sean Connery and Audrey Hepburn as the middle-aged main characters. It’s tender, witty, sometimes funny and above all genuine. Certainly not a master-piece, but good entertainment.

I initially thought this was a “I watched a childhood movie with my kid, and thought of something silly” thing. Guess not.

We’re MEN, MEN in TIGHTS…. thanks, now that song is stuck in my head

There is a big that previous page shows the internet vs zombies comic not the ones with Zeke.

It’s not a bug… left/right arrows change depending on what “series” the current strip is.
Allows people to go back and read say old Analog & D-pad issues without being interrupted by sillies.

Not a bug. Once you enter into the actual comic page (in this case, https://cad-comic.com/comic/oo-da-lally) instead of just https://cad-comic.com, the previous/next and first/last buttons navigate to the previous/next comic in that series. Both this comic and Never Satisfied are part of the original Ctrl Alt Del series, whereas Identity, p21 is a part of the Analog and D-Pad series. So pressing the “Previous” button while on this comic will take you to the Ctrl Alt Del comic posted before this one, which is Never Satisfied. You can switch back to the Analog and D-Pad series by going through the Archives… Read more »

Awesome job drawing Alan-a-Dale and Robin! Being a childhood favorite that I hadn’t seen in decades, Disney’s Robin Hood was the first thing I watched on Disney+ after we ran out of Mando. 😁

It’s a weird game with the victory being “who has their hand on the crank at the last second”. So one team can just wait for the last second to strike. If any of the prior steps of taking the key, or capturing the chest the first time had any bearing on victory it’d probably work a lot better.

Have you played the game? Because there’s quite a bit more that goes into being the team with your hands in the winch at the last second. Knowing when to crank, when to hold off and teamfight, when to make sure you control respawns, etc. Nor is the chunk of gold from that final winch the only metric for victory; sure, you can sit and wait and try to steal that last tick, but you’ll end up with a pile of gold and no experience levels to spend it on. That a team can win by scoring the final leg… Read more »

I think my first exposure to Robin Hood (as a strictly cinematic experience) was Shrek.